Advertisement
The Newspaper for the Future of Miami
Connect with us:
Front Page » Communities » Future of Little Havana under microscope

Future of Little Havana under microscope 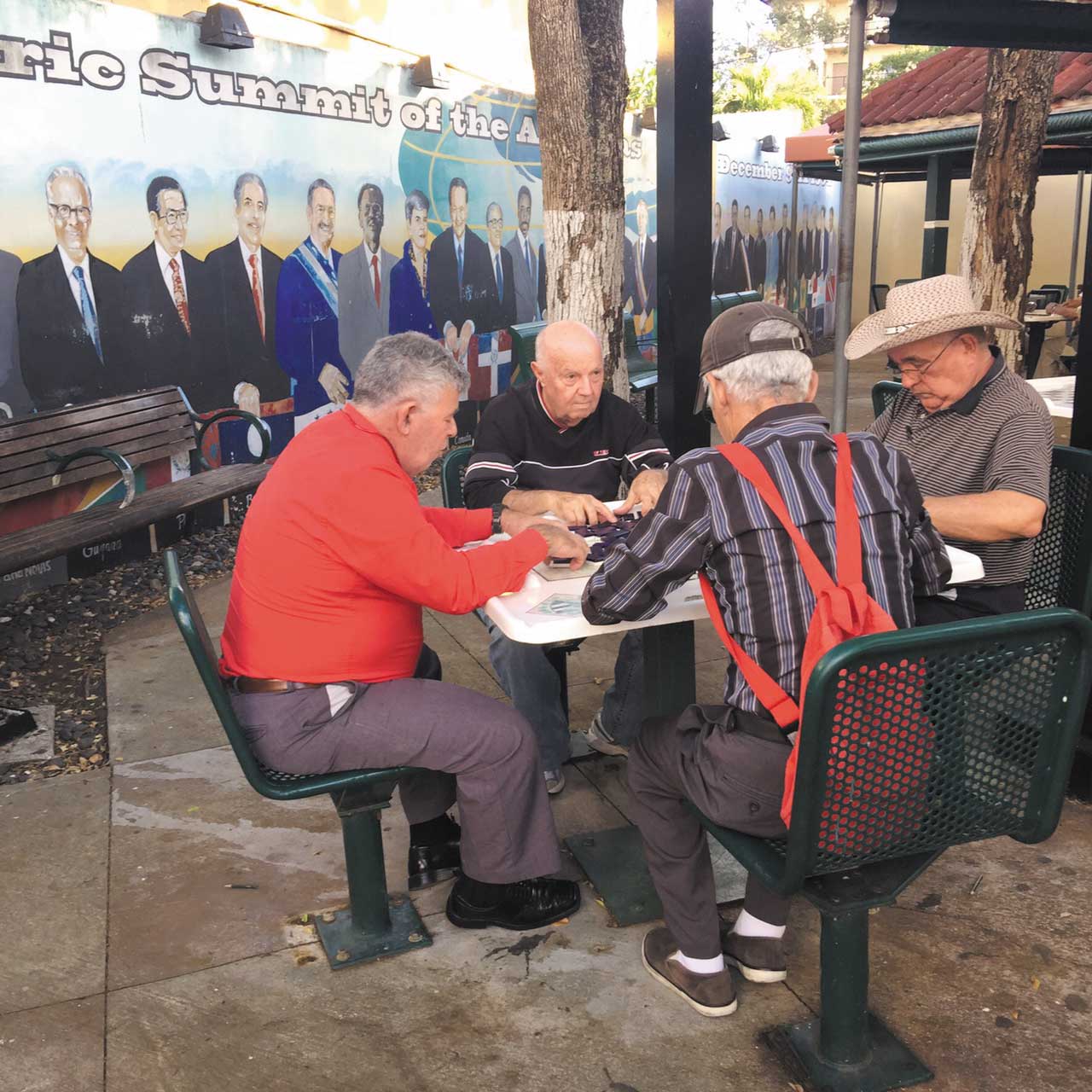 Over 100 people gave their opinions last week on what they like about Little Havana and how they want it to develop moving forward.
A number of stakeholders came to Miami Senior High School on Saturday for the first of three community meetings dedicated to Little Havana.
Plusurbia – in partnership with the National Trust for Historic Preservation, Dade Heritage Trust and Live Healthy Little Havana – invited anyone with interest in the neighborhood to share thoughts on a long-term plan for the community’s healthy future while protecting its history and heritage.
In January, the National Trust for Historic Preservation declared the neighborhood a “national treasure.” During a ceremony in the Manuel Artime Theatre, where the announcement was made, Plusurbia principal Juan Mullerat said his architectural and urban design firm headquartered in Coconut Grove, along with its partners, would be launching a long-term planning process to work with neighborhood residents, civic leaders and others to steer the community forward with its past intact.
The first meeting was Saturday, March 11. The next two are to be in April and May on dates to be announced.
Seated at tables wearing tags with just their first names, people from all walks of life talked about their concerns, hopes and love for the historic community.
Called “Little Havana, ME IMPORTA,” the meeting began with a welcome from a woman who’s working with a residential group in the community. She introduced Mr. Mullerat. “We needed a local to lead us,” Mr. Mullerat said. “Little Havana is a very special place. The National Trust for Historic Preservation is the largest advocacy group within the nation with a focus on advocacy for neighborhoods which like to restore old buildings.”
“We believe Little Havana’s older and historic buildings serve the community for a healthy place to be,” he said. “Cultures are embedded in Little Havana. It’s because of the relationship you all have that we’re here,” he said to all in the high school’s library. “We’re here to listen and learn why Little Havana matters to you. Your responses will help us create recommendations for a thriving Little Havana.”
Miami Today was sitting at Table 9, and was joined first by Michael Caballero, CEO of start-up Earthware Inc., which is planning bio-plastic cutlery. Also an engineer for Federal Express, Mr. Caballero moved to Miami-Dade from Port Charlotte in 2008 for college.
When asked at Table 9 what he likes about Little Havana and wants for the neighborhood, Mr. Caballero said “walkability” and “cleaner,” respectively. Others said “historic buildings” and “preserve.” Mr. Caballero liked the idea of walking on Eighth Street.
The eight persons at the table were asked to lay out where they live and work; if they visit Little Havana local businesses; if they utilize the parks and, if so, which; to identify on a map – placed on each table – places that matter and why; identify where Little Havana can grow and how the neighborhoods should grow; and identify a street they love and one that’s a problem.
Important issues to consider were if the street has access to public transportation; whether people speed along the street; whether ample shade provides a comfortable place to walk; and whether there are bike paths.
Some at the meeting were Peter N. Wood, Health Foundation of South Florida vice president of programs and community investments, and David Collins of Coconut Grove, who is working on an ongoing effort for a business improvement district in Little Havana with Bill Fuller, one of the owners of Ball & Chain, a popular nightclub on Eighth Street.
Also there were Officer Paul McLaughlin of the City of Miami Police Department with his partner; Laurie Fucini-Jay, director of transportation, engineering and planning for Urban Health Solutions; and Andrea Iglesias, the interim executive director of Urban Health Partnerships.
Steve Wright of Plusurbia summarized later Saturday night big-picture ideas that came from the 100-plus who attended.
The stakeholders talked about:
■Creating new community and cultural centers.
■Ensuring that new construction is contextual and compatible with the neighborhood.
■Preserving and re-using historic buildings.
■Protecting and enhancing the sense of place of Calle Ocho.
■Creating more trolley routes and improving trolley service.
■Improving transit connections to major employment centers – downtown and the airport; creating a water taxi along the Miami River; creating a transit loop.
■Identifying neighborhood centers and providing convenient and safe multi-modal connections between them and to employment centers.
■Supporting and improving safe and convenient pedestrian and bicycle movement through the neighborhood.
■Improving pedestrian safety on sidewalks and safe crosswalks.
■Providing better lighting in alleys, bus stops, public spaces and parks.
■Calming speeding traffic.
■Converting one-way to two-way streets.
■Reducing crime for safety at home and in the streets.
■Ensuring that housing is affordable and accessible.
■Maintaining existing buildings as decent places to live.
■Creating an approach for compassionate code compliance.
■Keeping streets clean by reducing litter and maintaining infrastructure and landscape.
■Supporting multicultural and multigenerational living spaces.
■Creating more parks and open space and improve access to existing parks.
■Planting more trees on private and public property.
■Adding shade.
■Improving riverfront access.

4 Responses to Future of Little Havana under microscope