Advertisement
The Newspaper for the Future of Miami
Connect with us:
Front Page » Government » Transit plan corridors may be cut short if funds fall short 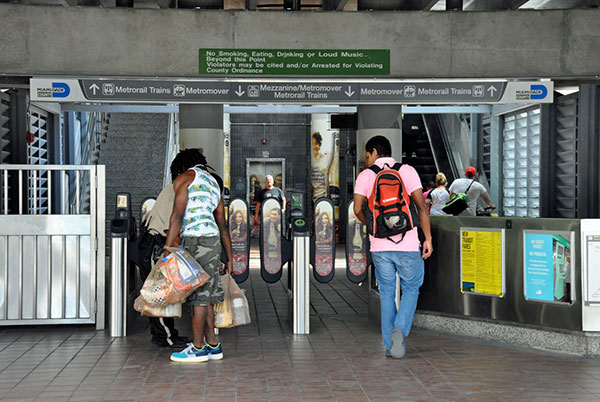 County commissioners on Tuesday approved a resolution providing up to $11 million each for three general contracts, each of which will be assigned to study three SMART plan corridors for Miami-Dade.
Before the vote, however, several questioned transit chief Alice Bravo as to why the county needs three different entities to do three different studies.
Commissioners Barbara Jordan and Joe Martinez both expressed concern at the start of over an hour-long discussion. Ms. Jordan asked if the scope of any studies have changed since the last request for $22 million. Mr. Martinez said the money for studying the corridors is not being spent wisely. “I know it will pass with eight votes,” he said. “Just for the record, we’re wasting taxpayer money.”
Ms. Bravo explained the legislation requesting an award not to exceed $22 million for professional services that would provide engineering expertise for the capital improvement plan has not changed in scope and the money is for engineering services. When the SMART plan was approved, however, she said the department thought it a good idea to have three different companies handling the studies for a broader array of services.
The original professional service agreement with Parsons Brinckerhoff of up to $22 million was advertised before the SMART plan was approved, Ms. Bravo said. “We now realize we’ll need three major studies” for the three corridors Miami-Dade is currently working on: East-West, South and the Beach.
Each of the three will cost a different amount and the Florida Department of Transportation, doing three corridors as well, is paying half the cost ($5 million) for the Beach corridor, which could cost $10 million, Ms. Bravo said.
Jose “Pepe” Diaz said he didn’t want to argue with other commissioners but “Alice came into this mess” and that he’s been in Washington, DC, where questions always turn to whether or not Miami-Dade has a plan for the corridors. “Engineering is the most important part,” Mr. Diaz said.
Chair Esteban Bovo Jr. said he’s personally tired of studies and that the county must move on or it will lose citizens’ trust and the half-cent sales tax. “Then you’ll have nothing.”
Mayor Carlos Gimenez recommended lowering the $22 million and then coming back to the commission for a higher amount if necessary. “I hope we can get more out of $11 million and like the idea of different consultants,” the mayor said. “I like competition.”
Moreover, Mr. Gimenez said, he doesn’t want to send a signal to residents that the county is spending so much on studies. “We need studies to get federal support,” he said. “We need to go after as much federal money as we can; we could receive 50% [of the funding].”
The corridors will be extremely expensive, Mr. Gimenez said.