Advertisement
The Newspaper for the Future of Miami
Connect with us:
Front Page » Transportation » Three studies at $11 million each for SMART plan transit corridors OK’d 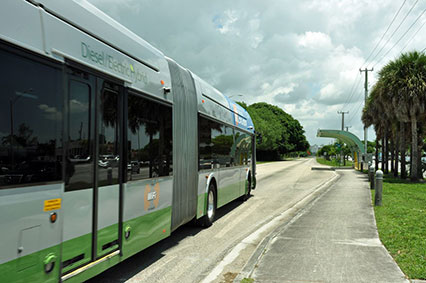 Something new might be in the offing for the Strategic Miami Area Rapid Transit plan, which aims to add transit along six corridors. Alice Bravo, director of the county’s Transportation & Public Works Department, told a Feb. 16 meeting of the Citizens Independent Transportation Trust that minimum operating segments might be built if funding goals for full build-out aren’t reached within a realistic time frame.
“This assumes we build a reasonable part and come back for a second round and build the rest later,” she said.
At full build-out the plan looks like this.
■For the Miami Beach corridor, a 3.3-mile elevated Metromover would run from Miami’s Museum Park Station to Fifth Street and Alton Road in Miami Beach. The cost at build-out in today’s dollars is $400 million.
■On the Northeast corridor, a 14-mile, at-grade commuter rail on existing Florida East Coast Railway tracks would run from downtown Miami to Aventura. The projected cost would be $186 million, which might change depending on how much the railroad company charges to access its track.
Because these are relatively short corridors, and the tracks are already in place to serve the northeast corridor, the minimum operating scenario would be to build them fully, Ms. Bravo said.
■In the East-West corridor, a 10-mile at-grade, partially elevated Metrorail extension would run mainly along State Road 836 from the Miami Intermodal Center (MIC) to Florida International University. The cost is $923 million. A minimum operating segment would run from the MIC to the Palmetto Expressway, at a reduced cost.
■The Kendall corridor would be served by a 10-mile, at-grade Metrorail along the Kendall Drive median from Dadeland South Metrorail Station to Southwest 162nd Avenue. The cost in today’s dollars is $607 million, but that cost would be substantially lower for a segment running from Dadeland to the Florida Turnpike.
■On the North corridor, a 9.5-mile, at-grade Metrorail extension along the Northwest 27th Avenue median would run from the Martin Luther King Jr. Metrorail Station to Northwest 215th Street, which is the county line. The cost in today’s dollars is $600 million. The minimum operating segment would have Northwest 119th Street as its northern terminus.
■Along the South route, a 20-mile, at-grade Metrorail extension would run in the existing South Dade Busway from the Dadeland South Station to Homestead and Florida City The projected cost would be $648 million; an abbreviated version would run the service to Southwest 200th Street.
The cost for the entire plan would be $3.8 billion, but it’s anticipated that three of the projects will receive 40% federal funding, that 25% will come from the Florida Department of Transportation, and that a percentage will come from the Citizens Independent Transportation Trust. The minimum operating segment plan would cost $1.9 billion, leaving a $702 million gap for the county to fill.
“Obviously, since we’re operating smaller segments of the corridors, annual operating costs will drop to $83 million, as opposed to the $116 million we had before,” Ms. Bravo said.
“It’s important to note that the SMART plan is already in action,” she said. “We have portions of projects already underway,” including the Miami Central Station downtown for the Northeast corridor and the 850-space Dolphin Park & Ride station for the East-West corridor. Various transit oriented developments and park-and-ride facilities are advancing for the South corridor, she said, and the county is negotiating for a transit-oriented development on a 15-acre parcel at Northwest 215th Street on the North corridor.