Advertisement
The Newspaper for the Future of Miami
Connect with us:
Front Page » Top Stories » 2,700 affordable housing units targeted for downtown Miami 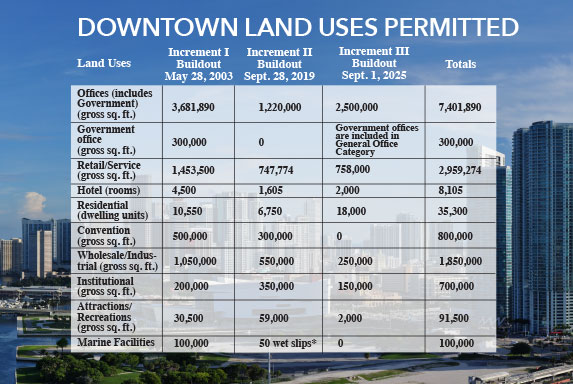 Miami’s lack of affordable housing is addressed in an updated regional development plan proposed and approved by the Downtown Development Authority.

The DRI is designed to allow controlled growth and must be approved by the city’s Downtown Development Authority (DDA) and the city commission and then filed with the state.

In 1972, the Florida Legislature adopted the Developments of Regional Impact Program, which provides a process to identify regional impacts stemming from large developments and appropriate provisions to mitigate those impacts.

As part of the process, the city provides annual development reports to a regional organization and state-level review panel.

The application for the third increment has been two years in the making and has been approved by all applicable state agencies, said Joseph Goldstein, an attorney with the Holland & Knight firm, hired by the DDA to prepare the proposal.

A Planning and Zoning Department analysis of Increment III reads in part, “A downtown Miami, activated by a thriving commercial sector, bustling nightlife, and charming, walkable, multi-family neighborhoods is a vision realized. There is still room to grow, and Increment III is proposed for adoption to facilitate this growth.”

The city’s Planning and Zoning Department and the Planning, Zoning and Appeals Board recommended approval of the plan. The DDA’s directors approved it in late October.

A second and final vote on the amended plan could occur at the commission’s December meeting.

The call for affordable housing appears under the heading of economic development in the third increment.

The city’s serious shortage of affordable housing, including workforce housing, is a problem “in the newspapers every day,” he said.

Mr. Goldstein said the new proposal calls for construction of no fewer than 2,700 affordable housing units within the DRI area, representing 15% of all the new residential units proposed as part of Increment III.

The range of affordable housing types extends from extremely low income to workforce.

Workforce housing policies focus on providing attractive and affordable residential units for middle-income service workers such as police officers, teachers and nurses near their jobs. It is primarily a concern in regions like South Florida with high housing costs, according to a recent study by University of Miami School of Business Administration.

Increment III reads, in part: “The City shall establish ordinances, programs or other mechanisms that require that housing available for purchase or rental by extremely low (up to 30% AMI), very-low (up to 50% of AMI), low (up to 80% of AMI), moderate (up to 120% of AMI), workforce (up to 140% of AMI) populations … be constructed or caused to be constructed in an amount equal to no less than 2,700 dwelling units or 15% of the residential units proposed within the DDRI Increment III within an area of a 10 mile or a 20 minute commute shed from and within the boundaries of this DDRI, whichever is less … but in all events, within the jurisdiction of the City of Miami.”

The proposal goes on to say that all housing units for extremely low, very-low, low, moderate and workforce populations constructed and conveyed pursuant to this condition “shall limit resale to a price in accordance with the affordable or workforce price for a control period of 20 years, or more, by providing an appropriately enforceable assurance that said unit shall not be offered for a price greater than the maximum workforce housing unit sales price as … established by the Miami-Dade County Department of Regulatory and Economic Resources at the time of said sale.”

And Increment III would require all rental housing for extremely low, very-low, low, moderate and workforce populations provided in satisfaction of this condition “shall be maintained by the owner as affordable for low, moderate, and/or workforce incomes for a period of 20 years. If the units are sold during the initial 20 year period, a new 20 year period will apply.”

The proposal notes that the DDA is to work with South Florida Regional Council staff to explore creative affordable and workforce housing solutions, including micro-units, co-living, reduced parking requirements, mixed-income housing and “rent to buy” programs, and the rehabilitation of existing housing units.

The DDA is also to work with the council to ensure a balanced distribution of housing, based on income levels.