Advertisement
The Newspaper for the Future of Miami
Connect with us:
Front Page » Transportation » Northwest 25th Street viaduct a congestion buster 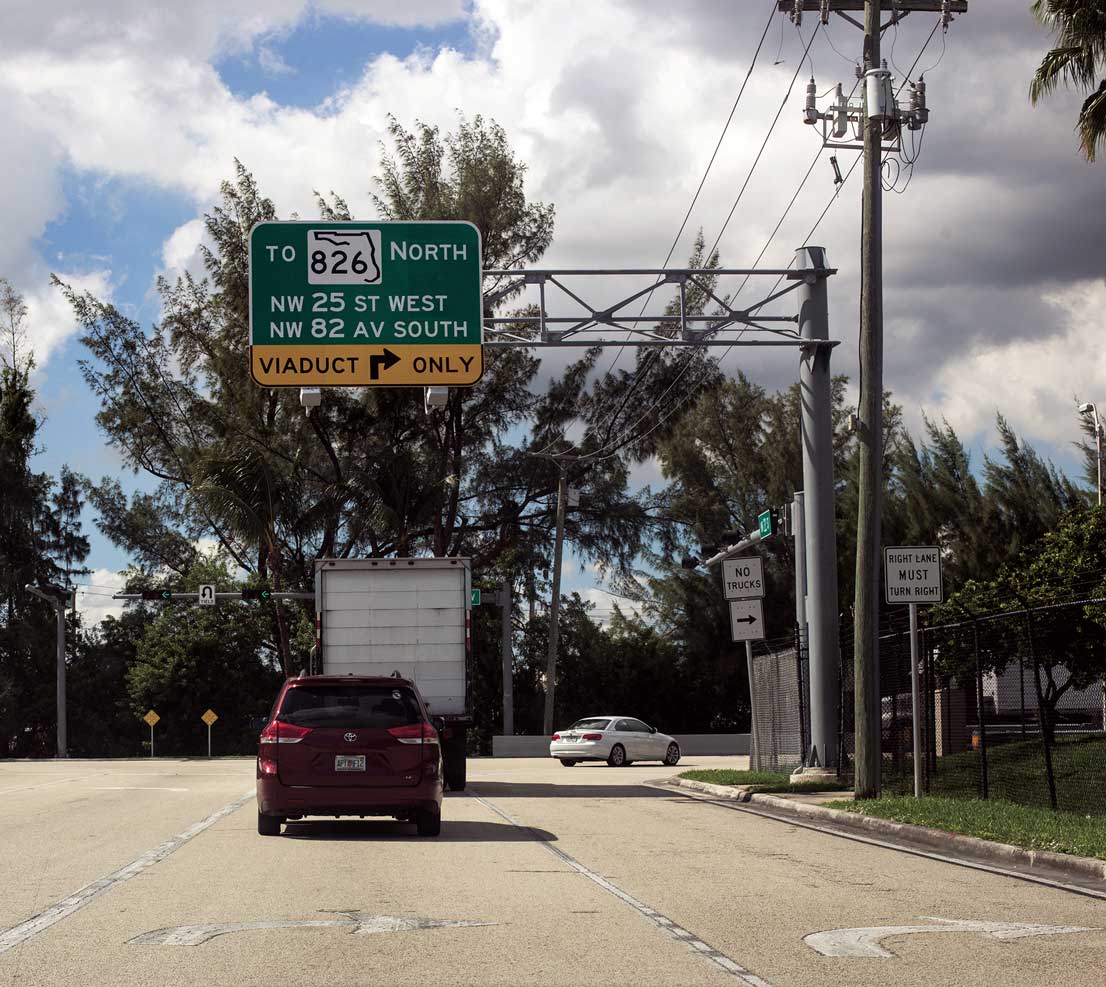 The Northwest 25th Street viaduct, completed in August, is getting good reviews from users.

The viaduct, built to alleviate traffic congestion in one of the county’s busiest industrial areas, separates commuter traffic from cargo trucks going to and from Miami International Airport’s West Cargo Area on Northwest 82nd Avenue. For most of its length it runs along the north side of Northwest 25th Street, going over the expressway and touching down just east of Northwest 82nd.

“Feedback has been positive from users,” said Ivette Ruiz-Paz, a spokesperson for the Florida Department of Transportation, “including the City of Doral and Miami-Dade Aviation Department.”

By using the viaduct instead of the Northwest 25th Street roadway, she said, trucks traveling to and from MIA’s cargo facility bypass six traffic signals and an active railroad crossing inset, which should cut travel time in half.

“The viaduct,” she said, “provides drivers with a more consistent route to and from the airport in terms of time.”

With many trucks diverted to the viaduct, Ms. Ruiz-Paz said, “field observations indicate that travel time along the Northwest 25th Street roadway within the project limits has been reduced. The improved travel times are a combination of added capacity, improved signalization, additional and improved turning lanes, and increased turning radii at major intersections.”

“We’re in constant interaction with our cargo carriers, freight forwarders and truckers,” said Joseph Napoli, chief of staff for Miami-Dade Aviation Department, “and all have indicated improvements in time and predictability of the route. Everyone is telling us that equates to savings.

“Margins are very small in air cargo, and we’re looking at anything we can do to make it more attractive for these companies to use Miami.”

“The viaduct is helping with the flow of traffic within Doral,” said Luis Perez-Codina, vice president of marketing & commercialization for Liaison CAN/US Logistics, a Canadian company that opened US headquarters in Miami last spring.

“We move pharmaceuticals and local produce as well as perishables coming in fresh at controlled temperatures from Latin America,” Mr. Perez-Codina said, “and that means we have that time component. So the viaduct is big for us. We are trying to focus our drivers to avoid 25th Street by jumping on the viaduct and onto the Palmetto if they’re going north.

“It’s a great solution, and we would love to see it in more parts of the county where there is truck traffic.”

MIA, Mr. Napoli said, is the largest international freight airport in the US and 10th largest in the world, “but our cargo has been relatively flat for the past seven to 10 years. So we are looking heavily at infrastructure improvements to remain competitive.”

The department, he said, is beginning execution of its Cargo Optimization, Redevelopment & Expansion Plan, known as CORE, developed over the past year and a half. “We envision this plan will help us double our capacity for cargo,” Mr. Napoli said.

The first phase – optimization – will add more ramp space for parking planes. Most of the funding for that phase, he said, comes from grants from the Federal Aviation Administration and the Florida Department of Transportation.

Two to three years from now, Mr. Napoli said, the redevelopment phase will probably kick in. “We are looking at some facilities to tear down,” he said, “and replace with more efficient vertical rather than single-story structures. “We are also looking at areas for expansion. But that would be way off in the future.”

In addition to infrastructure improvements, Mr. Napoli said, MIA is undertaking three initiatives in hopes of increasing its competitive edge as an air-freight leader. “We have been named a pharmaceutical hub,” he said, “which should increase our pharmaceutical volume by helping shippers feel comfortable here at MIA.

“We were recently approved by the county commission to apply to become a foreign trade zone. We think we will get approval by early next year” at the federal level.

“Third,” Mr. Napoli said, “we plan to launch Florida’s first ocean-to-air transshipment program by the end of the year.”

The ocean-to-air program allows perishable products shipped to Miami by sea to be transferred to air transport without having to go through customs.