Advertisement
The Newspaper for the Future of Miami
Connect with us:
Front Page » Transportation » New Metrorail cars from Hitachi beginning their tests 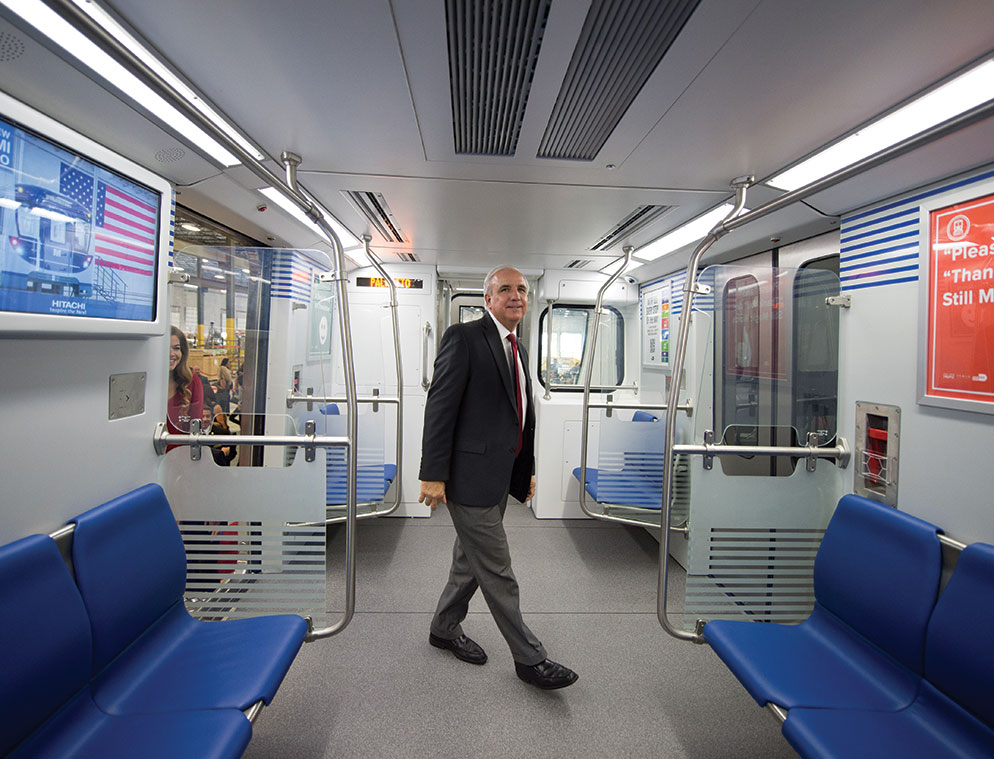 Miami-Dade is rolling into the future with two new Metrorail cars now being tested and soon to be put into service.

Officials and transit authorities hosted an unveiling Monday at Medley’s Hitachi facility, where 136 new train cars are to be assembled and delivered before the end of 2019. All have upgraded features including WiFi, new lighting, digital signs and automated announcement of stations.

The county’s initiative to modernize public transportation shows a commitment to the future, said Transportation and Public Works Director Alice Bravo to the 150-plus people who attended. On Tuesday, she told Miami Today the two cars now ready for testing, and the 134 to come, are a good sign of dedication to “investing in our existing system as a prelude to expanding it.”

The two new cars will undergo intensive testing for about eight to nine months before being put into use in mid-2017, Ms. Bravo said.

In August, she and Miami Today toured the Hitachi facility where Ralph Carl, engineer and project quality manager, explained the first few cars that are assembled will be turned over to Ernest Matthews and his teams at the county’s Transportation and Public Works Department for “qualification,” which is a rigorous checklist that all specifications were met in the quality plan. Once criteria are established, Mr. Carl said, testing will be set for subsequent cars.

On Monday, Mayor Carlos Giménez said the custom-designed 140,400-square-foot facility, when fully functional, will employ 100 people and a number of subcontractors. “We’re diversifying the economy of Miami-Dade with manufacturing and assembly.”

The 136 new Metrorail cars will cost the county about $300 million, or $2.06 million each. They’ll be roughly the same size and length as the cars they’re replacing but with improved components, thanks to decades of technology, Ms. Bravo said.

The new cars can be coupled with another pair to create a four-car or even a six-car train, depending on the size of the station.

People attending the unveiling asked what’s different about these new cars, she said.

Miami-Dade’s current Metrorail fleet was built in 1984, Ms. Bravo pointed out, and many changes since then are incorporated into the manufacture of the new cars, including essentially silent brakes, compared with screeching brake treads; computerized control of systems for a smoother acceleration, reduced use of electricity and more reliability.

One Response to New Metrorail cars from Hitachi beginning their tests