Advertisement
The Newspaper for the Future of Miami
Connect with us:
Front Page » Real Estate » East Little Havana getting supermarket-apartments complex 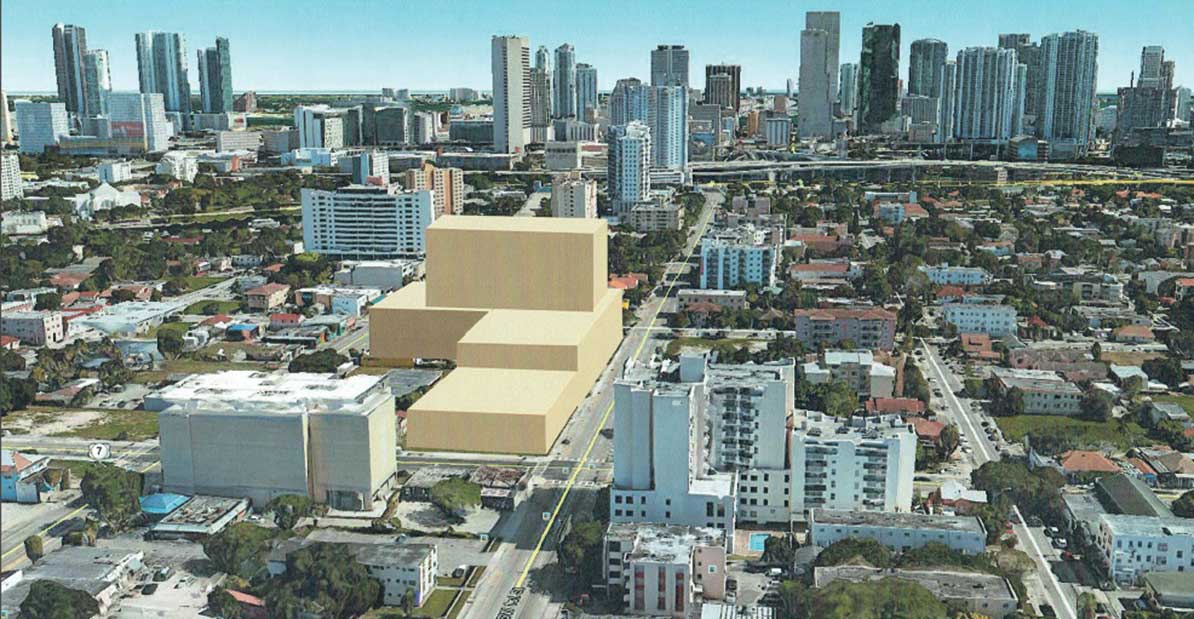 A revised plan to bring a residential and retail project to the heart of East Little Havana has gained unanimous support of Miami’s Urban Development Review Board.

The plan from Eight & First LLC will bring a Presidente Supermarket and 96 rental apartments to a high-profile site at 45 SW Eighth Ave.

Back in February, the board deferred the project after complaining of several proposed components, including a busy color scheme for the façade.

One member also expressed disappointment that the developer wasn’t taking full advantage of allowable housing, proposing 96 apartments when zoning would allow up to 312.

The board had considered recommending denial of the plan but instead opted to defer it, allowing the developer and its design team the chance to return with revisions.

In a revised plan submitted in September, the developer stuck with 96 residential units but changed several other aspects.

The project, labeled Eight and First Development, is planned at the northwest corner of Southwest First Street and Seventh Avenue. The architect is Herman Chaviano with DTI Architecture.

The main changes include the layout of the retail floor space and parking, a less varied color palette, a different look to the façade of the grocery store portion, and the selection of materials.

The L-shaped building will extend to Southwest Eighth Avenue on the west and part of West Flagler Street on the north.

Two other ground floor retail spaces are included, one at 5,465 square feet and the other at 3,130, extending along Southwest Seventh Avenue.

The 12-story building is to include eight levels of apartments atop four levels of parking, including street level. The retail space will hug the outside of the parking.

The retail space will include storefronts along the northeast, east and southeast sides of the property, along with a new Presidente Supermarket on the southwest, Mr. Chaviano wrote to the review board.

In addition, a landscaped pedestrian cross block passage will cross from West Flagler Street to Southwest First Street, and bicycle parking racks will be sprinkled on the site.

Tenants will have a pool area with other amenities on the fifth floor.

“At the ground floor, the proposed parking lot is hidden from pedestrian view by the retail stores and in some areas by a continuous hedge and street screens. The parking floors above are shielded by stucco walls and decorative perforated metal forms with different shapes and colors

to create a visual effect for the pedestrian and at the same time assist with the parking garage ventilation,” he wrote.

In his letter, the architect references points board members raised in February, including:

νReduce the number of colors proposed for the apartment building.

νActivate the corners of the project.

νProvide a break in the façade along Northwest First Street.

And he shows how the design team addressed those suggestions, including: The original proposed color scheme for the apartment building façade has been reduced; building corners have been addressed; a more visible break in the façade between the two-story supermarket and the four-story garage has been provided; the decorative perforated screen panels have been extended to the third floor at the garage; and along Northwest First Street a canopy has been added to accentuate the crosswalk passage.

Mr. Chaviano concluded, “The proposed revisions have been made in collaboration with the owner, and the Planning and Zoning staff, and as such we would like to take this opportunity to thank all those involved in providing solutions to the board’s comments and moving this project forward.”

Meeting Oct. 5, several board members said they liked the changes.

Neil Hall said, “I think it’s an improvement.” He said the design changes help to break up the mass of the building.

“I agree. I think it is an improvement,” said Jesus A. Permuy.

Board Chairman Robert Behar said he still wanted more openness to the corner of the grocery store, but “I see the attempt to address our comments and concerns.”