Advertisement
The Newspaper for the Future of Miami
Connect with us:
Front Page » Communities » Brickell’s boom continues to inch westward 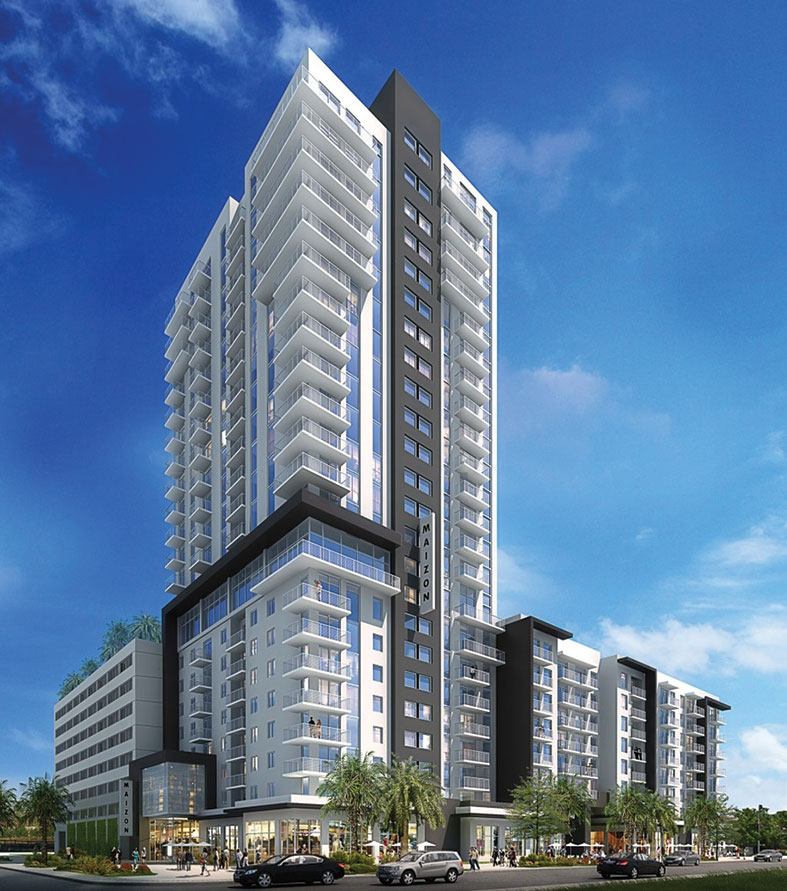 A development company plans to build a mixed-use residential tower on Southwest Second Avenue, about a block and a half east of I-95.

Maizon is to be a 24-story tower, home to 262 apartments, about 15,000 square feet of ground floor retail uses and parking for about 366 vehicles.

The city’s Urban Development Review Board on Oct. 5 recommended approval.

The project is from ZOM Florida and its affiliate ZF Development II LLC, and designed by MSA Architects.

The development will be right across the street from the city’s Fire Station No. 4.

The developer is requesting several waivers, including permission to allow parking into the second layer, a reduction in a two-way drive width from 23 to 22 feet, two residential loading berths instead of one commercial loading berth, and a 30% reduction in required parking.

The company is allowed to ask for the parking reduction in part because of the site’s proximity to public transit. It’s about a block west of the Brickell Metrorail Station and Brickell Metromover Station.

In a letter to city planners, attorney Steve Wernick, representing ZOM, wrote: “Maizon will be a valuable addition to the West Brickell community by providing new commercial uses and pedestrian activation to the rapidly growing neighborhood centered around the Southwest Second Avenue corridor.”

He said multi-family structures and paved parking make up the property, consisting generally of one- and two-story apartment buildings constructed between 1948 and 1976, which are more of a suburban garden style and nonconforming to Miami 21 zoning.

“It is anticipated that all of these will be demolished in order to construct the project, with a design more in harmony with Miami 21 and the evolving nature of the West Brickell area,” wrote Mr. Wernick.

The design characteristics will complement a surrounding West Brickell community that has undergone tremendous change in recent years, he wrote.

“Southwest Second Avenue is becoming an important corridor for pedestrian activation, and is poised to become a community of mixed-income professionals that is desirable to households taking advantage of public transportation and easy access to work,” Mr. Wernick wrote.

Attorney Nicholas Barshel told the review board that ZOM is a leader in residential development in South Florida.

ZOM Living owns and operates mixed-use apartment buildings across the region, including the Residences at Meridian Pointe, and is responsible for the development of several apartment buildings in downtown Miami and Brickell under construction or recently completed, including Monarc at Met 3, Avant at Met Square and Solitair.

Mr. Barshel repeated the desire to cater to those young professionals wishing to make Miami’s urban landscape their home, with a growing desire to use public transit instead of using private vehicles. Maizon intends to meet whose wishes, he said.

The 24-story structure is to have a floor area of 424,258 square feet, including about 15,000 square feet of commercial use on the ground level along with open courtyard areas and the residential leasing center for the apartment building.

On the upper levels, the project will include 262 apartment units as well as an amenity deck and pool on the ninth level. An on-site garage is built into the facility.

Beatriz Hernandez of MSA Architects told the board the project has a strong urban edge and a very contemporary design.

Accent colors and frame elements are to help break up the monotony of the largest portion of the building, and there is a transition between the podium and the tower, she said.

Along Southwest 12th Street the project provides elements for pedestrian activation on the ground floor, including a bike shop, and art treatments to screen parking areas above.

“Very nice work,” said board member Anthony Tzamtzis. “I like the articulation of the building.”

Board member Neil Hall said he liked the “urban feel.”

Board member Jesus A. Permuy asked if Maizon will be built in the immediate future.

“Absolutely,” answered Ms. Hernandez. She said they’re already in the design-development stage and preparing to seek building permits so work can begin.