Advertisement
The Newspaper for the Future of Miami
Connect with us:
Front Page » Real Estate » Magellan Development Group moves on 838 Midtown apartments 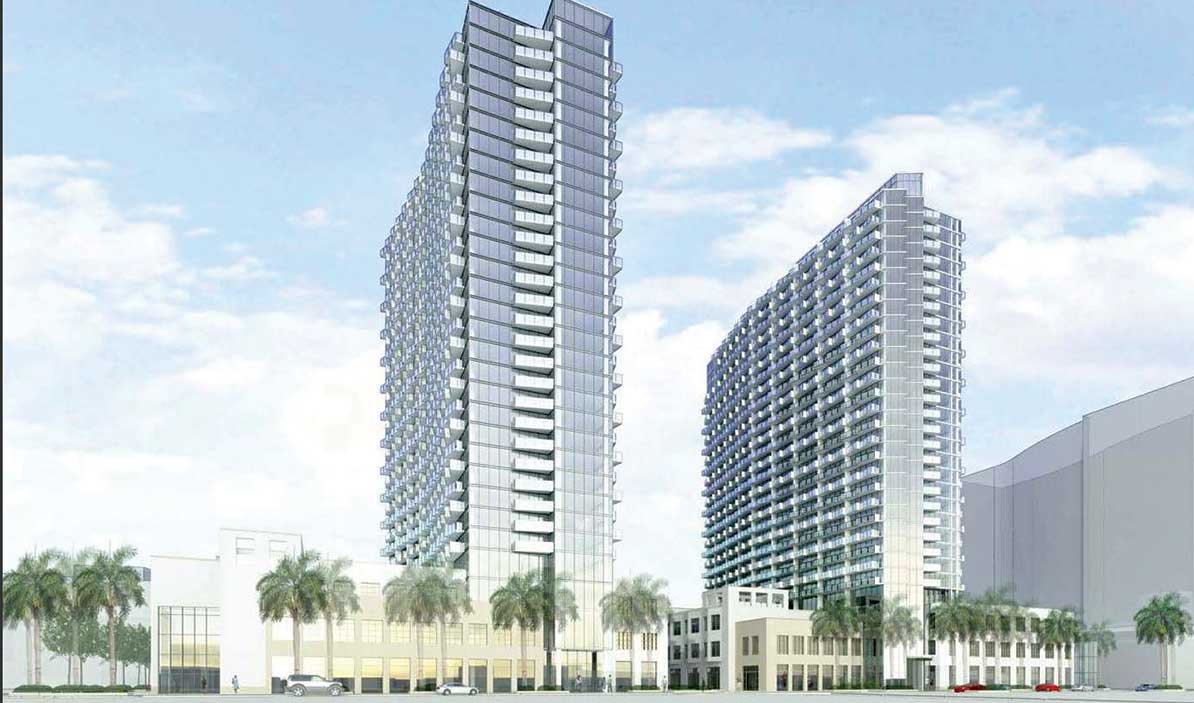 Showing how its large mixed-use project will fit in with the surroundings of a growing Midtown helped Magellan Development Group gain a thumbs-up from a city review board.

After deferring the project last month, the Urban Development Review Board on Oct. 5 recommended approval of Midtown 6 and Midtown 7.

The project is designed to bring 838 apartments to Midtown in two towers.

In September, the board deferred the project after criticizing a lack of detail in renderings and a failure to illustrate how the towers would interact with the area.

The board was presented with an updated plan and renderings for the Oct. 5 meeting. The new information shows the planned structures and how they relate to nearby properties and proposed projects.

“This shows in context our buildings,” said architect Grace Ames of bKL Architecture.

Each building is 27 floors of apartments and a four-story podium with amenity deck. Each will host first-floor retail and share a pedestrian path.

Earlier, Ms. Ames had described the project as “sister buildings that play off each other,” and noted how glass and bronze on the first floor and wood screens would offer a warm, inviting look.

Board members said they didn’t see the welcoming look she referred to, and said they wanted much more detail on the materials to be used in construction and the layout of the retail spaces.

“This is an enlarged view of the podium, so you can see the material,” she said, going over new renderings with the board.

Coral stone, stucco and glass will be used on the first floor retail, she said.

Board member Fidel Perez said he wasn’t at the September meeting and was viewing the project for the first time.

While he said the project was exciting, and that the architect attempted to break up or soften the mass of the podium on such a large development, “I still think you need to do more,” Mr. Perez said.

Ms. Ames said the podium is only four stories high and lower than other podiums for similar mixed-use projects.

“We actually worked to keep it low,” she told the board.

Mr. Perez also said he felt the eastern side of the project, facing the Florida East Coast Railway tracks, appeared to be “left behind” in the design and could be improved with a bit more attention to detail.

Ms. Ames said architects can revisit that side of the project.

Board member Neil Hall was pleased to see more detailed drawings and plans.

“I’m happy you responded to us,” he told Ms. Ames. “Compliments to you. You’ve responded in a positive way.”

Mr. Hall went on to say he is quite familiar with Midtown and he appreciates the planned pedestrian mall.

Board member Anthony Tzamtzis said he was also seeing the project for the first time.

Although he said he admired the site plan and the way retail uses were distributed on the site, he was critical of the façade on the towers, calling the design monotonous and too plain.

Board Chairman Robert Behar agreed, saying the mass of the towers repeats the same element over and over and the buildings “need something more.”

Mr. Behar suggested a little TLC would help the look of the large buildings.

“I like the project – but break up the massing,” he said.

Ms. Ames said architects are looking at different ideas for the look of the towers.

The board considered recommending approval with a condition that the developer work to better articulate the large façade on the towers, to break up the uniformity.

In the end, the vote to recommend approval was without conditions, although Ms. Ames said architects will continue to work with city staff on improving the look of the buildings.

Board member Jesus A. Permuy said the updated plans were “quite an improvement,” particularly the way they showed the relationship to neighboring properties, including the Chiquita property and Midtown 8.

Chiquita North and Chiquita South are planned for 3010 NE Second Ave. and 2900 NE Second Ave. The project is a multi-family housing development offering about 700 rental apartments in several buildings.

In July, the review board recommended approval of Midtown 8, planned for 2901 and 2951 NE First Ave., north of Northeast 29th Street. The project includes a 28-story tower, 387 residential units, about 30,000 square feet of ground floor retail uses and an adjacent garage for about 520 vehicles.

Designed by Loewenberg Architects, Midtown 5 is developed as a premier rental tower consisting of studio and one- to three- bedroom units.