Advertisement
The Newspaper for the Future of Miami
Connect with us:
Front Page » Government » New control center battles traffic gridlock 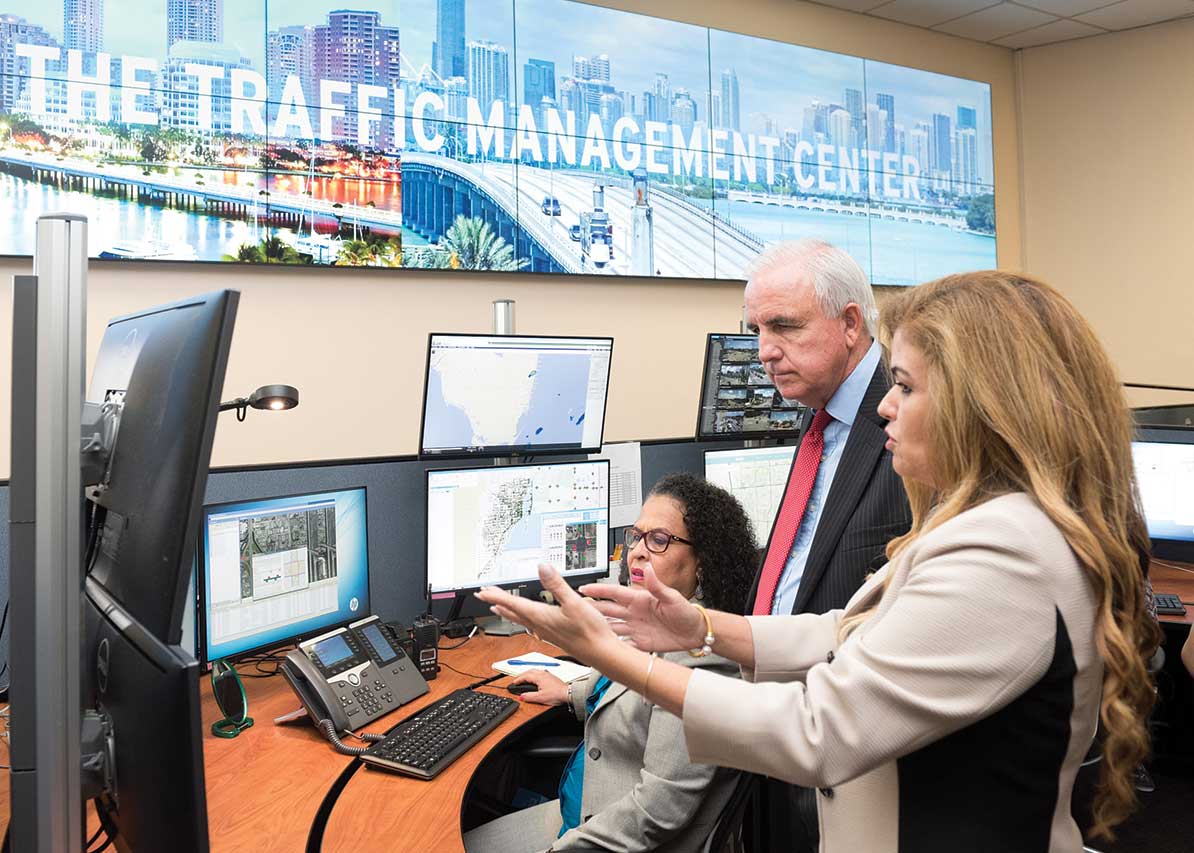 In a full-on assault on traffic gridlock, Miami-Dade County has spent about $9 million, most of it invested in technology, to keep vehicles moving and help drivers avoid bottlenecks.

“Mayor Gimenez has directed me to leverage the technology available to us to maximize our investment,” said Alice Bravo, director of the county’s Transportation and Public Works Department.

Back in 1975, the center’s technological highlight was a large panel on the wall studded with bulbs that represented about 1,200 traffic lights that made up the traffic-signal system. “If you wanted to change a signal, a traffic engineer had to go to that signal and manually change it,” Ms. Bravo said. “And we had to rely on someone to let us know that the signal wasn’t working.”

Today, traffic-signal operations engineers monitor a huge wall of screens showing intersections around the county and the nearly 3,000 traffic signals that govern them, and can remotely change signals if there’s a problem or to reduce congestion. The engineers are on duty from 6 a.m. to midnight weekdays and Saturdays and from 9 a.m. to 7 p.m. Sundays.

In collaboration with the Florida Department of Transportation, the county has installed 400 cameras that feed information into the control center, with 500 more on the way.

“Since we have installed the new cameras and software, the drive time along US 1 from Southwest 152nd Street to I-95 has been reduced by 15 minutes,” Ms. Bravo said.

And, within the next few years, the lights will be equipped with adaptive signal controllers with sensors that will be able to recognize congestion, adjust the signal’s timing and broadcast a message to other signals, Ms. Bravo said. “They will be our eyes and ears.”

Within the next two months, the adaptive signals will be installed along Northwest 36th Street, from the center – which is just east of Milam Dairy Road (Northwest 72nd Avenue) – west to Northwest 97th Avenue in Doral.

The next 18 months will see the sensor-equipped lights installed along 12 corridors that the county hasn’t identified yet. “Within reason, the light can stay green a little longer if it detects a backup, or to allow a bus to cross the intersection,” Ms. Bravo said. They can be programmed so that drivers along major arteries get more green lights during rush hours, she added.

The county has also partnered with WAZE, the cell phone app that provides real-time traffic information, to share data, and is also contacting Apple and Google.

“A lot of time is lost when people have to leave early because they’re not sure how long the drive will take,” Ms. Bravo said, which is easier to predict with the traffic app. “We’ll partner with as many people as we can to share data.”