Advertisement
The Newspaper for the Future of Miami
Connect with us:
Front Page » Top Stories » Merchandise exports from South Florida 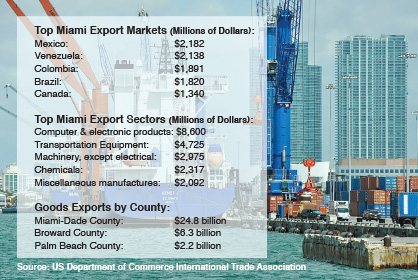 Miami was the seventh-largest exporter in the US with a total goods export value of $33.3 billion and accounted for 64% of total Florida goods exports.

US metropolitan areas exported more than $1.3 trillion in merchandise exports in 2015, accounting for 89% of all goods exported from the country.

A total of 156 metropolitan areas tallied merchandise exports worth more than $1 billion in 2015 and Miami was one of only 14 that exported more than $20 billion worth of goods.

Notably, small and medium enterprises account for a whopping 96% of Miami goods exporters.

The US currently has 14 free trade agreements (FTAs) in force with 20 countries, and Miami goods exporters gladly took advantage of those in 2015.

The agreements are a critical tool in helping US exporters access the more than 95% of the world’s consumers living outside the country.

The same year, 15,337 Miami area companies exported to US FTA partners, with 8,533 of those exporting to Trans-Pacific Partnership countries and 5,103 exporting to the European Union.

“Exports continue to be a driving force for the Miami economy” said US Secretary of Commerce Penny Pritzker in a statement.

“The Department of Commerce continues to focus its services on assisting more Miami-based firms sell their ‘Made in America’ products to global consumers, which will support economic growth and good-paying jobs.”