Advertisement
The Newspaper for the Future of Miami
Connect with us:
Front Page » Communities » City-county deal will funnel funds to The Underline

City-county deal will funnel funds to The Underline 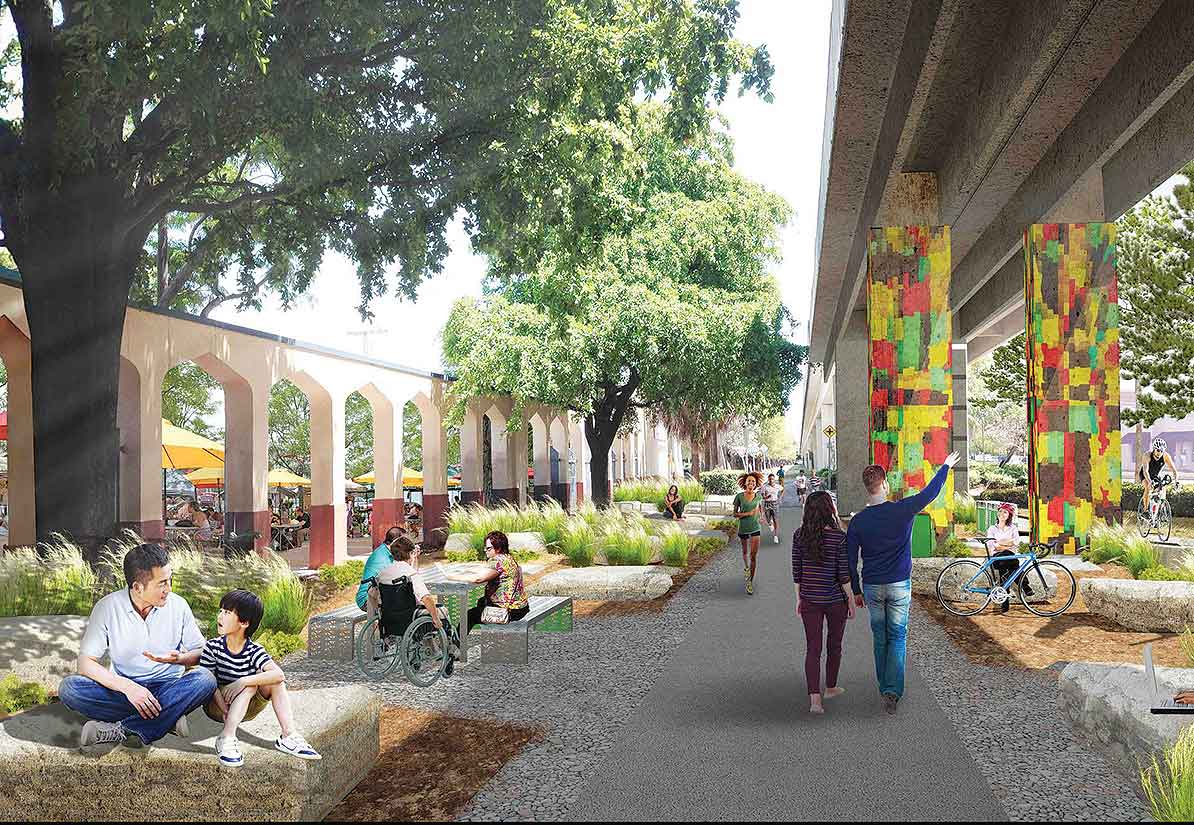 Miami city officials have crafted an agreement with Miami-Dade County that will provide funding for portions of The Underline, the plan to transform land under the county’s elevated Metrorail system into a linear park, urban trail and living art destination.

At their meeting today (9/8), Miami city commissioners are to consider approving a memo of understanding with the county to fund a portion of The Underline Project with park impact fees from new development.

The impact fees would come from new development within 1,000 feet of The Underline and would not exceed $50 million, according to the proposed agreement.

The county controls the land under the Metrorail, property that is about 100 feet wide and runs the length of the tracks. It is designated a Rapid Transit Corridor and also referred to as the M-Path.

Miami-Dade County Parks, Recreation and Open Spaces Department has partnered with Friends of The Underline to turn 10 miles of pathway beneath the Metrorail into something special. The initial plan includes upgrades to the M-Path between the Miami River north of Brickell and the Dadeland South station.

About half of the 10-mile route is in the City of Miami.

The project’s vision is to enhance connectivity, mobility and biking safety for hundreds of thousands of Miami-Dade residents and visitors.

In October 2014, county commissioners endorsed The Underline and provided an implementation and funding plan for it.

One year ago this week, city commissioners approved a $200,000 allocation to the county to help pay for the master plan work on The Underline.

At that time, commissioners discussed future funding support for the project. That action and discussion are noted in this week’s resolution.

At that Sept. 10, 2015, meeting the commissioners directed City Manager Daniel Alfonso to negotiate a memo of understanding for funding of phase one of The Underline using up to $1 million of city park impact fees attributable to construction within 500 feet to the east of phase one of the project. The $200,000 contribution for planning and the framework for future funding using impact fees came at the urging of former Commissioner Marc Sarnoff, whose term ended last year.

The resolution prepared for today’s meeting notes that the estimated cost of the entire project is about $100 million, and roughly 50% of The Underline Project is in the city.

“Enhancing this recreational space within the city will provide numerous benefits to the surrounding community,” it says, and the city now wishes to support the project at a larger amount, up to $50 million.

Those dollars are to come from city park impact fees collected from new development “that have paid or will pay impact fees” within 1,000 feet of The Underline, the resolution says.

In the last year, the project has gained support from public and private entities, and The Underline’s master plan design team, James Corner Field Operations, has been sharing preliminary drawings and plans at a series of community meetings.

In February, the project received $75,000 in donations from Pinnacle Housing Group and 13th Floor Investments with The Adler Group. The money was earmarked toward the first implementation of the project, “Brickell Backyard,” which is a section under the Metrorail from the Miami River to Southwest 15th Road.

Amenities for this portion are to include picnic areas, a dog park, an outdoor gym, a play area and climbing wall. Additional highlights are to be the River Room on the bank of the Miami River and the Hammock Trail Park adjacent to Simpson Park.

In July, Florida Blue announced a $115,000 donation. That money was also earmarked for the “Brickell Backyard” portion.

“The Underline is an extraordinary example of businesses and communities coming together to support a healthy lifestyle and Florida Blue is proud to be joining this effort,” said South Florida market president Penny Shaffer.

“Innovation and collaboration are such an important part of our company’s culture and The Underline will be a living display of this, a safe place where cyclists, walkers, artists and families all come together,” she said.

Also this summer, the Knight Foundation announced The Underline as a winner of the Knight Cities Challenge, a competition that seeks new ideas from innovators and how they plan to improve the future of their city. The award brings $250,000 to the project, for a sports field and gym as part of The Underline.

This event, at Brickell Metrorail Station, 1001 SW First Ave., showcased the first stage of development. Event goers were encouraged to walk or ride a bike or take transit to the celebration. Activities included a ribbon-cutting for the site’s mini “pop-up gym,” free workouts on the outdoor fitness equipment, yoga demonstrations and opportunities to view the park renderings.

The preview event is the forerunner of the future “Brickell Underline Park” to be anchored on The Underline’s north end at the Miami River, near Brickell Avenue.

When completed, the proposed park is to feature picnic areas, park benches, native vegetation, a nature-inspired playground, a dog park, a basketball court and art installations.

Mixed-use parks are also planned for other segments of The Underline, as well as two trails, one for pedestrians and the other for bicyclists.

City commissioners have urged the county to designate the Rapid Transit Corridor as park and recreation space.