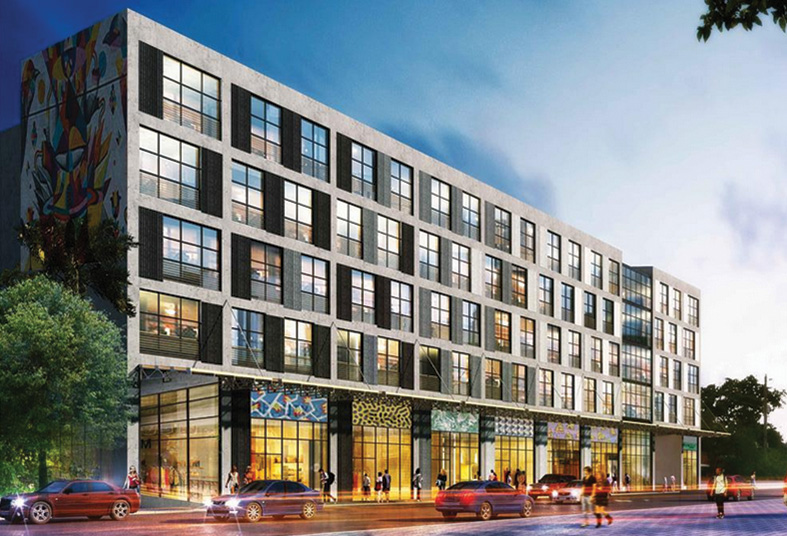 The Related Group’s first venture into the rapidly growing Wynwood Arts District met with mixed reviews among members of the city’s Urban Development Review Board.

The board recommended approval, with conditions. The proposal earlier had had a similar result from the new Wynwood Design Review Committee.

The building is planned at five stories, home to about 174 residences, 36,300 square feet of commercial space, and room enough for parking 179 vehicles.

Miami-based The Related Group has partnered with another company for this project and submitted plans under the name Wynwood 26th Street Owner LLC.

The land is on Northwest 26th Street, midblock between North Miami Avenue and Northwest First Avenue, in Wynwood’s northeast corner.

Some review board members said they weren’t impressed by the overall design and had hoped for more, and some didn’t like the layout and location of a proposed pedestrian paseo.

Wynwood 26 is designed by Arquitectonica. The project is described as offering ground floor retail, a cross-block paseo, and apartments on levels two through five with a square courtyard and rooftop. Parking is in what they’re calling the mezzanine level.

A metal canopy with structural stays would protect the sidewalk from the elements.

Joseph Eisenberg, with the city’s planning and zoning department, detailed some of the waivers the developer requested, including increasing allowed lot coverage from 80% to 88% and allowing parking into the second level.

Attorney Carlos Lago, representing the developers, noted that Wynwood 26 is the first project in the district from noted developer The Related Group.

The property is more than an acre, extends between 26th and 27th streets providing two primary frontages, and the project promotes design principals in the Miami 21 zoning regulations and the special overlay zoning NRD-1 or Neighborhood Redevelopment District-1, he said.

Mr. Lago said the location will afford easy pedestrian access, and the project plans to incorporate public art into the façade and the paseo to help activate the street. The pedestrian paseo will be wide and open to the sky, he said.

The commercial space is targeted on both primary frontages, with plans for retail and restaurant uses, Mr. Lago told the board.

The rooftop is to include gardens, a pool and other amenities.

One of the project architects said the designers drew inspiration from some of Wynwood’s original warehouses. He said the sidewalk will be shaded by a 5-foot canopy, and the paseo will be 15 feet wide along the western side of the structure.

“I’m not fully sold,” said board member Willy Bermello, who described the roof as overwhelming.

Mr. Bermello suggested a better location for the paseo was more centralized and near the lobby.

“It’s the key,” he said. Mr. Bermello told the architects this represented a “bunt” instead of a solid swing at bat, “the way I know your firm can … I’m waiting for more.”

Board member Dean Lewis said the board needs to let the planning and zoning staff know what it wants to see in paseos, as staff works with architects early on.

Mr. Lewis also didn’t like the use of the term mezzanine level for where the bulk of the parking is planned.

He suggested the developers are playing with smoke and mirrors, and in reality “you have a six-story structure.”

Board Chairman Robert Behar said there should be a text amendment to the new NRD-1 zoning to clearly define what the developers are calling a “mezzanine parking level.”

Mr. Eisenberg noted the newness of the NRD-1 overlay zoning and said “the NRD is a laboratory for this kind of stuff … we’ll review it and possibly bring a text amendment.”

Other board members also suggested  moving the paseo.

Mr. Lewis made the motion to recommend approval, conditioned on the developer moving the pedestrian paseo to the center of the structure and lining it with retail space on both sides.

Another condition asked that the developer reevaluate the landscaping plan for the site.

Developer representatives took the plan earlier for consideration to the Wynwood Design Review Committee, which recommended approval with these conditions: