Advertisement
The Newspaper for the Future of Miami
Connect with us:
Front Page » Top Stories » Island Gardens mega-resort on Watson Island moving ahead 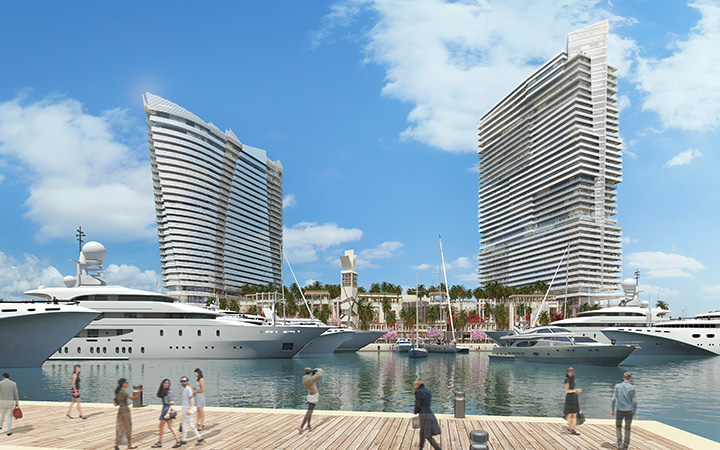 Island Gardens, the planned mega resort promising to turn a corner of Watson Island into a prime resort destination, is moving ahead with plans for foundational work to support the ambitious venture.

That’s the word from Brian May, a representative of developer Flagstone Property Group LLC.

“The project is moving forward,” Mr. May said this week. “We have a foundation permit application for a portion of the upland work pending with the city, and we expect to get that very soon.”

The permit is to allow foundation work on some of the permanent structures planned for Deep Harbour Marina, including a fish market, said Mr. May. The permit also includes foundation work for a portion of the retail, he said.

In the meantime, Flagstone is celebrating the attention it’s getting for the new marina that boasts of being the only marina in North America designed exclusively for super-yachts.

Deep Harbour Marina was officially opened in January and hosted a yacht show in February.

“It has received tremendous attention world-wide,” Mr. May said of the marina. “You’ll remember it was finished towards the end of last season, and it’s being just well received all over the world as a great destination.”

Deep Harbour offers 5,000 linear feet of capacity, accommodating an average of 50 yachts stretching up to 550 feet and drafts of 18-21 feet deep. The marina began accepting daily, monthly, seasonal and annual leases for docking after the first of the year.

For several months the new piers have led to a temporary restaurant onshore.

The Deck at Island Gardens is described as an outdoor lounge that offers “a perfect environment for Miami’s elite to wine, dine and dance outdoors.”

While work on the upland portion of the project hasn’t been rapid, Mr. May cited steady progress as the developer must go through the review and permitting process with a host of government agencies.

Mr. May said he is optimistic that the year 2017 will see at a minimum the main foundations poured for the resort and the rise of the pedestal for the parking facility.

The city owns the 6.5-acre site. Voters approved leasing the land to Flagstone for the development back in 2001.

Numerous delays, including the economic downturn and port tunnel dredging, held back Flagstone’s plans for years. Marine mitigation began at the site in May 2014, which represented a formal commencement of work. That was followed by dredging for the deep water marina and construction of a new seawall.

Development of the marina required special permitting for coral, sponge and seagrass relocation.

The developer says it intends to build a resort destination with dual hotels, fractional residential units, high-end retail stores and restaurants, along with the marina.