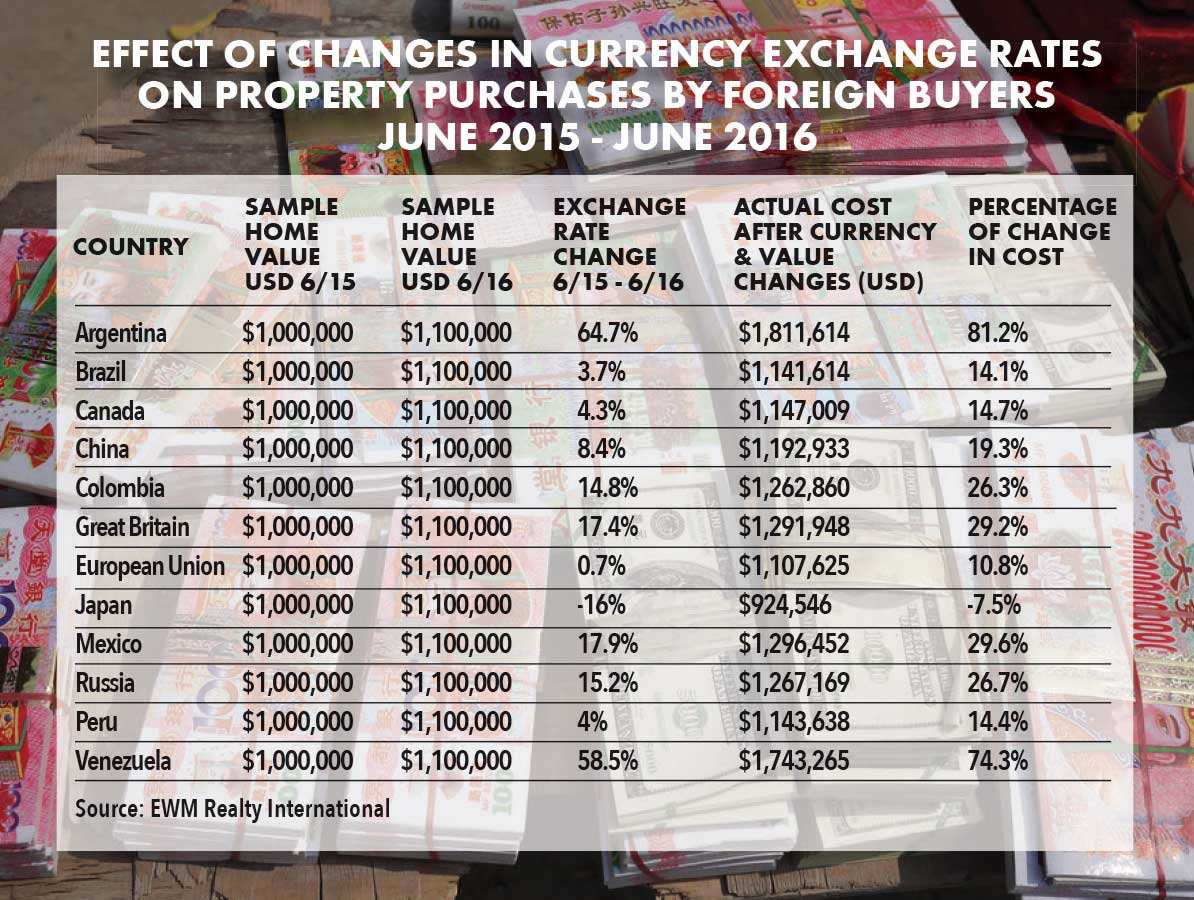 Changes in currency exchange rates have some effect on the slowdown in sales of Miami’s luxury residential real estate, but that’s just one part of the larger picture, leading South Florida brokers say.

Due to home value changes and a 64.7% hike in the exchange rate, EWM reports, an Argentine wishing to buy a $1.1 million home in Miami would pay 81.2% more in actual costs now than a year ago. A Venezuelan would pay 74.3% more. Many other international buyers would face less dramatic but still hefty increases.

“We may have the largest pent-up demand we’ve ever had,” Mr. Shuffield said. “The reason is that while foreign buyers like to bring their assets here as a hedge against changes in currency valuation at home, these buyers have finally said the higher prices don’t meet their expectations. So a lot are standing on the sidelines waiting for prices to fall back to what they believe are more appropriate prices.”

Jay Parker, CEO of Douglas Elliman’s Florida Brokerage, said he believes that currency issues have played a significant role in the market slowdown, “but I also believe that some countries that have been most severely affected have started to return to a more stable situation.”

“Miami has evolved from a boom-bust market to one that has tremendous strength and is able to withstand that type of pattern,” Mr. Parker said. “Cycles are healthy. This slowdown will purge some of the low-hanging fruit and force sellers to become a bit more realistic with pricing or take their properties off the market and wait for prices to increase.”

Currency issues are just one factor among many affecting the cyclical pattern of real estate markets, said Carlos Gutierrez, current residential president of the Miami Realtors Association, “and like the stock market, it can change overnight.”

In general, said Mr. Gutierrez, who heads the Gutierrez Group at Keller Williams’ Miami Beach branch, “buyers from Europe or South America view the US as a market where they would rather move their assets. So it depends on the situation of the buyer as much as the currency.”

Recent research released by the Miami Realtors Association shows a change in the profile of international users visiting the association’s search portal – miamire.com.

The top 10 countries of origin in May 2015 were, in descending order, Brazil, Colombia, Canada, Venezuela, Argentina, India, Russia, Philippines, the UK and France.

In May of this year, they were Colombia, Venezuela, Argentina, Brazil, Spain, India, Canada, Israel, Philippines and Mexico.

But this broader interest in Miami real estate seems to have at least as much to do with safety concerns as with currency exchange rates.

Internet search patterns take a while to translate into sales, Mr. Shuffield said, but “we are definitely seeing more interest from India and other Asian countries. This is not showing up in sales yet, but direct flights from Turkey brought immediate results. The same thing happened a few years ago with Germany, when they realized that they can now utilize their properties here more quickly.

“When the French had a change in government and raised taxes,” he said, “we saw an immediate response to that. Now, with global terrorism, the US is very appealing for the safety of their families as well.”

“As unfortunate as worldwide issues such as terrorism and political instability have been,” Mr. Parker said, “they continue to put the US in an attractive light. At the same time Miami is starting to look more like a major metropolitan area, but with comparatively lower prices.

“On the flip side,” he said, “we haven’t seen any real flight from this market to capitalize on the exchange rate. It leads me to believe that not only price and value but the concept of safety and security – and ultimately our perceived discount as compared with other metro markets – are what attracts foreign buyers.

“Currencies will even out, as they always do. We are moving expensive real estate in new developments, and that’s a telltale sign about the desirability of our market,” said Mr. Parker.