Advertisement
The Newspaper for the Future of Miami
Connect with us:
Front Page » Government » I-395 signature bridge project advances 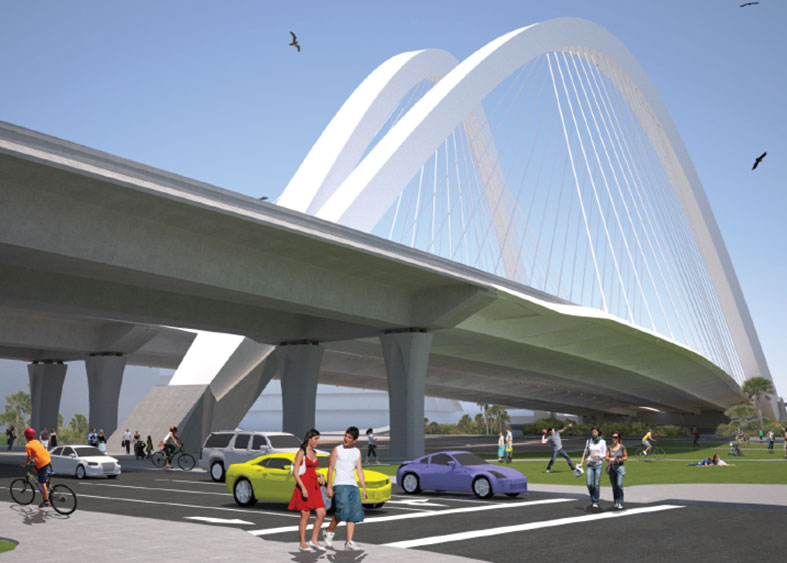 The Florida Department of Transportation is currently seeking design proposals after setting the minimum requirements for the signature I-395 bridge project, and for the open spaces underneath the elevated roadway, which are due back in late 2016.

At this time, six firms have been short-listed, according to Ivette Ruiz-Paz, media outreach specialist for the department’s District Six.

Included in the request for proposals was the Aesthetics Manuel which sets the minimum requirements for the bridge and plaza, Ms. Ruiz-Paz told Miami Today on Tuesday.

“The minimum requirements for the bridge include a minimum suspended span length of 500 feet and a minimum elevation above the ground of 245 feet,” she said. “The signature bridge must be a structural solution. The minimum requirements for the open spaces underneath are a combination of sidewalks and plantings. The drainage will be handled in a way to allow development of the full space in the future.”

According to Ms. Ruiz-Paz, the next major step is the pass/fail of the Aesthetic Signature Bridge proposals. She said the proposers with passing concepts may submit a final design proposal. The department anticipates awarding the project to the winning proposer by spring of next year.

The scope of the project includes a signature bridge and open spaces under the bridge to encourage community gatherings, Ms. Ruiz-Paz said.

The project is estimated to begin construction late 2017, she said, and will take about five years to complete.

“This project addresses operational deficiencies, increases capacity, and improves safety,” Ms. Ruiz-Paz said. “It builds a landmark in our community that will change the skyline of Miami with the signature bridge, while providing gathering areas under the bridge that will enhance the communities. The project also reconnects historic Overtown.”