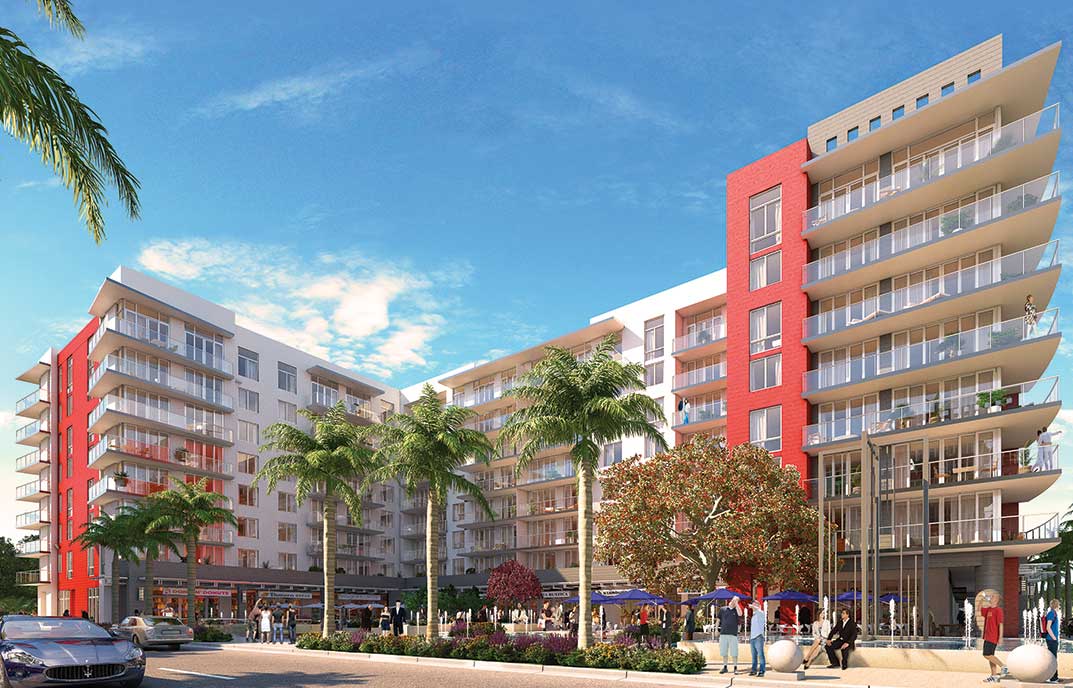 The first of the developments is Midtown Doral, now in its first of four phases on Northwest 107th Avenue.

Phase one is to feature more than 500 residential units in four eight-story residential buildings, and 72,000 square feet of commercial space.

Roughly 85% of residential units are sold, with only about 74 units left, and 90% of the commercial space leased, said Mr. Pino, president and founder of Century Homebuilders Group.

Two garages will provide phase one with 1,700 parking spaces.

“We will also have an office building. There are no office condos in this area. If you want to have an office, you have to go all the way to 41st Street.”

Also included is a clubhouse that will house a spa, fitness center, lounge, bar, two rooftop pools and cabanas, among other amenities.

The third and fourth phase will collectively introduce an additional 600 condos as well as a 225-unit hotel and 250,000 square feet of retail space.

“We have a lot of [businesses] that come to us and we are very, very selective,” Mr. Pino said, speaking about the process of selecting commercial tenants. “If I like a business, I talk to them and I bring them over.”

Two of the most recently signed tenants include Mexican restaurant Cancun Grill and Mediterranean restaurant Maroosh, which has signed up for 5,000 square feet of space.

Every unit comes with a “smart system,” he said, that allows residents to remotely unlock doors, manage thermostats, control lighting and open and close blinds, among other features, and provides 24-hour connectivity to concierge services.

The city’s corporate employment hub, housing the headquarters for companies such as Carnival Cruise Line and the Miami Herald, sees employees driving to Doral every day from all corners of Miami-Dade and beyond.

Midtown has been “very successful in targeting” these employees, Mr. Pino said, and marketing itself as a great place to live in order to be closer to work.

The second development, Mansions at Doral, began construction one year and a half ago, Mr. Pino said, and still has one and a half to go.

“There is no competition to what we’re doing,” he said about the development, which has homes ranging from $1.2 million to $2.5 million.

“It’s a fast-moving project. It’s not a fast-moving market, but there are still people that want to be in a private community but still want to feel like they’re living in a custom home.”

“The Mansions is not for everybody, but for people who have the ability to buy homes [in the price range], it’s the only community of its type in Doral,” Mr. Pino said. “You won’t have two houses that are the same – we won’t allow it.”

The development will offer buyers over 100 customization options and 35 floor plans.

“The idea is that you feel when you’re at the Mansions that we built you the home you designed,” Mr. Pino said.

While the development was designed to include 66 homes, Mr. Pino said, the end result will include no more than 55 to 58 homes as a result of people also buying the lots next door to their purchased property.

Roughly 17 or 18 units have closed, he said, with another 25 under construction and 15 families already living in the community.

The project is seeing one to two sales a month, Mr. Pino said.

“It’s not a production community… It’s a little bit more difficult to build homes as you’re dealing with the buyer because at the end of the day, we’re projecting a custom home.”

“The market is shaky, but for us it’s pretty good. The City of Doral is a very, very important city. A lot of people that work here want to live here,” Mr. Pino said. “We’re happy to be here. It’s a great city to do business in; the council is hands-on and pro-development.”