Advertisement
The Newspaper for the Future of Miami
Connect with us:
Front Page » Government » Double-decker restaurant under fire for lack of riverwalk

Double-decker restaurant under fire for lack of riverwalk 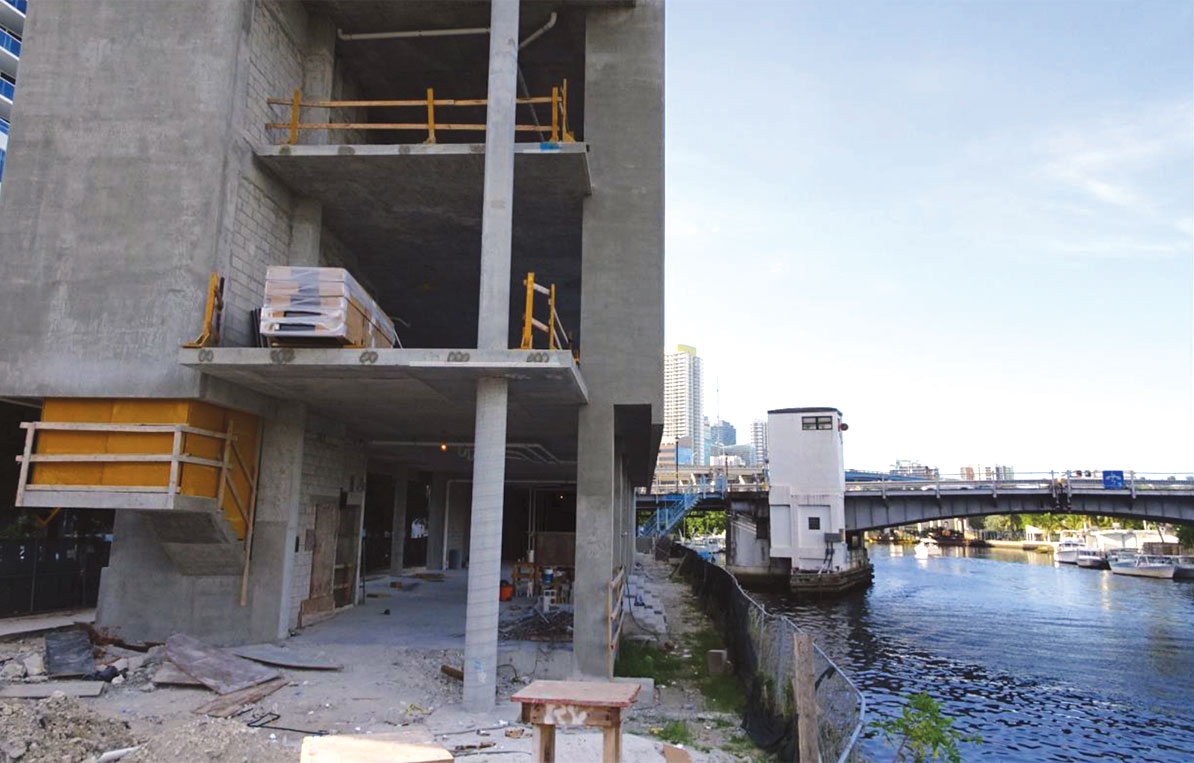 A unique double-decker restaurant being built to house two eateries on the banks of the Miami River has come under fire for its lack of a required public riverwalk.

Officials with the Miami River Commission are upset, saying the project doesn’t comply with a plan approved in 2014 for a 14-foot-wide riverwalk.

The project’s architect said work on the riverwalk itself has not yet begun, but he said when complete it will comply.

SUSHISAMBA and Duck & Waffle are to locate in a multi-level commercial building under construction at 40 SW North River Drive, the former East Coast Fisheries site.

The project was discussed Monday at the monthly meeting of the river commission. Members voted unanimously to reaffirm their November 2014 approval of a plan to build the commercial structure consistent with Miami 21 and the City Charter requirements for a public riverwalk of at least a 14-foot width.

The project was proposed by The Melo Group and considered Phase II of Flagler on the River.

Melo has a commitment with one tenant that plans to build-out the interior of the new structure after Melo constructs the exterior of the four-story building, according to Arturo Griego of Itec Design, principal architect of Phase II.

The site is directly on the river, across Northwest North River Drive from Melo’s 32-story, 300-unit condo Flagler on the River.

The city’s zoning code and charter require a public riverwalk be built and maintained.

Normally, the code requires a structure built on the river must be set back from the water at least 50 feet. Within that setback, a 25-foot-wide public riverwalk is required, featuring a minimum 15-foot-wide unobstructed pathway.

Because this site is narrow, a formula was used based on overall size of the property, and the final plan called for the 14-foot-wide riverwalk.

Concerns arose after a site visit in March where river commission officials saw revised plans they say are inconsistent with Miami 21 and the charter.

Minutes from a June 22 meeting of the commission’s Urban Infill and Greenways Subcommittee noted, “…the width was reduced from 14 feet required to 12 feet wide total, while reducing the unobstructed circulation zone from 8 feet 4 inches wide to 4 feet 6 inches (ADA requires 5 feet minimum) – 5 feet 10 inches. In addition the revised narrower public riverwalk, which is no longer consistent with Miami 21 … and the city charter, is now no longer continuous across the entire site, and the public side-yard connectors (from sidewalk to public riverwalk on both sides) were reduced in width as well.”

The minutes say neither the developer nor a representative accepted an invitation to attend the June 22 meeting.

“We were snubbed at the committee meeting,” said Dr. Ernie Martin, co-chair of the committee. “It’s a major outrage.”

Brett Bibeau, managing director of the river commission, said the developer claims to have a building permit from the city approving the site work but had not produced a copy of the permit after repeated requests.

In an email response to Miami Today, Mr. Griego included a document he said is the building permit, which appears to be a City of Miami electronic document on the project showing plan status is “Active,” and is marked “Plan Approved.”

There is no specific reference to the riverwalk, however.

Mr. Martin said he’s upset by the lack of a riverwalk, calling it “an egregious violation of a clear code,” and said it impacts another nearby major project on the river.

The riverwalk in front of the restaurants is supposed to connect with another stretch of public riverwalk to the east to be built as part of the Riverside Wharf project, Mr. Martin said.

That project consists of a complex of four riverfront restaurants and event spaces and a fish market and oyster bar, along with a new riverwalk, and was approved by city voters March 15.

Mr. Martin mentioned the referendum and the plan to connect the two portions of riverwalk, and the adverse impact of a smaller or disconnected riverwalk to the west.

Speaking of the reported changes to the riverwalk at 40 SW North River Drive, Mr. Martin said, “This cannot be tolerated.”

“This developer has basically thumbed a nose at us,” said Mr. Aguirre. He predicted the developer will eventually go before the city commission and “beg for mercy” to allow the smaller and altered riverwalk because the project will bring the city jobs and money.

Mr. Aguirre said he planned to talk to the mayor, the city manager and the planning director about the project. He said if the work is being done “roguely,” he will ask that the building permit be pulled and the construction shut down.

In an email response to Miami Today, Mr. Griego said the developers have an approved plan.

“The riverwalk portion of the project is not under construction yet. Only the shell building has really been built,” he wrote. He said he has been trying to keep the river commission in the loop as to progress on the site.

“The fact is that the riverwalk portion of the project has not been built because the tenant is not ready with the TI [tenant improvement] plans and this may have an affect on the design,” wrote Mr. Griego.

“I look forward to having the riverwalk built in compliance with all requirements, inclusive of FAC (Florida accessibility code) and all other applicable codes.

“We have gone through great lengths to design a compliant plan on an extremely challenging site. I am not sure who was the expert who claimed non-compliance, but it was not the architect, contractor, City of Miami building department, nor the City of Miami planning department. As mentioned, we have an approved plan that went through a full plan review for months at the city and the riverwalk construction has not even commenced,” Mr. Griego wrote.