Advertisement
The Newspaper for the Future of Miami
Connect with us:
Front Page » Real Estate » 2,300 Brickell condo openings delayed 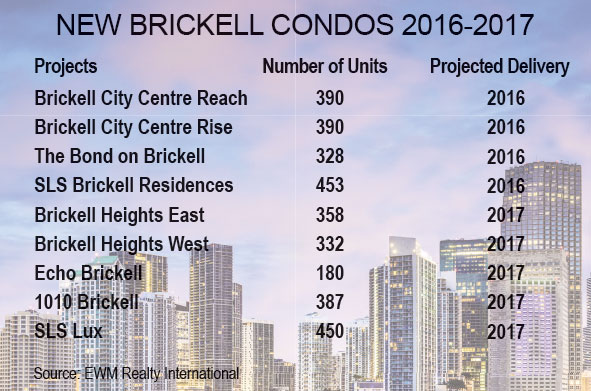 Although developers have held back on adding new product to the Brickell condo market in response to a slowdown in sales, area brokers say the market is still resilient – and there’s no cause for alarm.

According to ISG World’s Miami Report, more than 2,300 units in eight projects had once been slated for delivery in the first quarter this year. No new inventory actually arrived in the period, and during those three months, only 74 units sold. Annual sales in the Brickell condo market over the past five years, ISG reports, averaged 625 – more than 150 a quarter if sales were evenly distributed throughout the year.

The market’s sluggishness, brokers say, can be pinned to a number of factors.

“The biggest culprit seems to be the US dollar,” said ISG principal Craig Studnicky. Due to the strength of the dollar versus weak Latin American currencies, he said, sales from Latin America are off about 75%.

“With this high dollar it’s very hard to get money out of South America,” he said. “Demand is as strong as ever. We just have to wait for it to become more affordable.”

There are some positive signs. The US dollar “continues to depreciate against the Brazilian real, which is what we need to see the return of the Brazilian buyer,” Mr. Studnicky said. “When they start to move, buyers in other South American countries tend to watch and follow.”

“There are so many different moving parts,” she said, “but the most obvious is the increase in inventory.”

Over the past year, she said, there’s been a 19% increase, representing about 30 months of supply. Looking at the $1 million-plus market exclusively, Ms. Benitez said, that figure jumps to about 70 months. A nine-month supply is considered a balanced market.

“So we are looking at a bit of saturation, but we feel the market will correct itself. Even with this level of inventory we are very optimistic that the market will not see the drops in prices we saw in the last cycle.”

For the moment, though, she said, sales are down 30% from this time last year.

“That has everything to do with Latin America,” Ms. Benitez said. “It will be interesting to see what happens in the next six months. There will be opportunities created, but as more units come in, we will see owners in older buildings trying to sell at a very competitive rate.”

“Sales are going very well,” she said. “Miami is very resilient. We fall, we get up and we keep going.”

The fact that some developers are dragging their feet in Brickell, Ms. Cervera LaMadrid said, has more to do with their own larger strategies. “They are looking not just at what they have on Brickell but also what they have north of Brickell,” she said. “I don’t think anyone is rushing to introduce new product that is the same as existing inventory, but we may see some that are unique coming to market.”

Federal Reserve Chair Janet Yellen “is not only considering not raising interest rates,” he said, “but is toying with a negative interest rate. That will keep mortgage rates low and keep the US dollar softening against other currencies.”

As Latin American buyers hold back, brokers say they are training their sights on other opportunities, both foreign and domestic.

“We are beginning to see other groups looking at the market,” Ms. Benitez said. “We have inquiries from Turkey and China, for example. At the end of the day, Miami is an epicenter. We are still at a lower price point than New York, Boston and Chicago.”

“We now have to qualify not only the buyer but also the condo,” said Sam Pink, a mortgage loan officer with Homes Services Lending Group, and that becomes prohibitive because condo associations charge prospective buyers for information. “Our condo team will follow up with the condo association to qualify the building, and we will absorb the cost.

“Once we have qualified one buyer, it will be a much shorter process for other buyers in that building.”