Advertisement
The Newspaper for the Future of Miami
Connect with us:
Front Page » Communities » South Florida mayors team up to meet transportation needs 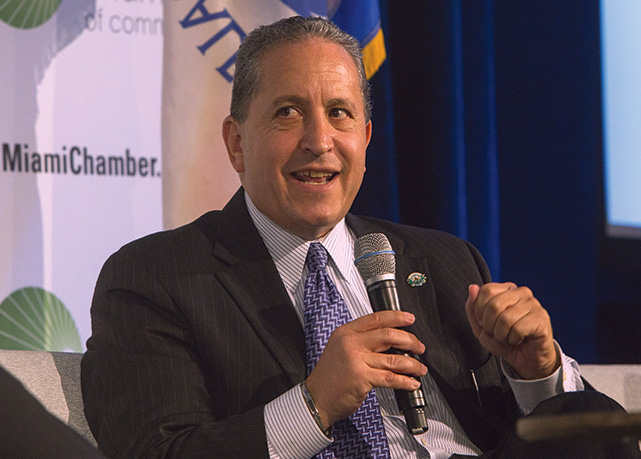 Together we stand, divided we fail.

That seemed to be the consensus among a gathering of South Florida mayors discussing transportation needs and other issues at the Greater Miami Chamber’s Goals Conference.

In order to compete with other heavyweight regions across the country for federal transportation funds, municipalities ought to work together, said several of the participants.

Weston Mayor Daniel Stermer promised to host a tri-county meeting to do just that, inviting officials from Miami-Dade, Broward and Palm Beach counties to meet and begin identifying the barriers to transportation solutions on a regional basis.

“It’s about all of us collectively,” Mr. Stermer said.

The past practice of parochialism should be abandoned, he said. “If we don’t, we’re going to stifle ourselves.”

As part of the mayoral forum, US Rep. Mario Diaz-Balart spoke of the need for municipalities to team up in the quest for funding.

His message: When it comes to securing money for transportation projects, if everything is a priority, then nothing is.

Mr. Diaz-Balart commended Miami-Dade County Commissioner Esteban Bovo Jr. for his “bold leadership” in zeroing in on practical, doable projects – projects that are reasonable and “not pie in the sky.”

“We need to pursue mass transit opportunities,” he said.

While the mayors spoke to other issues, transportation devoured much of the forum.

Moderator Tom Hudson from WLRN noted that traffic gridlock has been identified by the chamber as the most impactful issue stifling economic growth in the area.

Projects need to move people where they want to go and where they need to go, he said.

“The debate needs to shift from moving vehicles from Point A to Point B to moving people,” Mr. Seiler said.

“It’s frustrating [because] we’re all fighting for scarce resources,” he said.

Mr. Stermer wondered: what would happen if we banded together the MPOs of Miami-Dade, Broward and Palm Beach counties?

“We’ve been so parochial, as South Florida has grown,” he said. As the region has grown, “we’ve learned to do this better,” he said, suggesting three counties team up to create one region.

Aventura Mayor Enid Weisman noted the habit of many officials, “a propensity in dividing” up areas, drawing lines.

“This is a county road. That [over there] is the responsibility of MDX… it’s so confusing to our constituents … people don’t get it,” said Ms. Weisman.

She also recommended a regional approach.

“Until we have a comprehensive plan for the region, we lose out,” she said.

“There has been no transit planning for Miami-Dade County for decades – that’s the problem,” she said, blaming a lack of leadership.

But brighter days are ahead, said Ms. Lerner, sounding encouraged by recent events including the Miami-Dade MPO bringing on Aileen Boucle as executive director, the county hiring Alice Bravo to handle transportation matters, and the work of Miami City Commissioner Francis Suarez to advance transit needs.

The Miami-Dade MPO recently approved the Strategic Miami Area Rapid Transit, or SMART Plan, which identifies the development of six rapid transit corridors “that directly support the mobility of our future population and employment growth.”

More relief came when the city and county opened new roadways and connections in the booming new city, he said.

Miramar Mayor Wayne Messam said his city has the best of both worlds, sitting on the border of Broward and Miami-Dade counties.

He said more interconnectivity of existing transit options would help to ease congestion.

Brightline will be an economic driver for the tri-county area, he said.

Every municipality along the private passenger rail line, big and small, will be impacted by the new transit service, Mr. Stermer said.

That includes areas like El Portal, Hollywood, Hallandale; all will benefit from new mixed use development and redevelopment, he said.

This growth will boost local tax bases, Mr. Stermer said, and the new residential and commercial development will “spur our region.”

Mr. Hudson returned to the congressman’s advice to focus on a single project and not everything when going after funding, and asked the mayors to weigh in.

Mayor Seiler said, when studying what and where to build a transit project, “you’ve got to look at the numbers… where is the density? Where are the workplaces?”

“We should look past the invisible lines” that divide cities and counties, he said. “We need to stop being parochial.”

Mayor Boria said his city has plans to build more bike lanes and continue support of a trolley service.

Mr. Boria said part of the problem with traffic gridlock is that people don’t want to use the transit that’s already available.