Advertisement
The Newspaper for the Future of Miami
Connect with us:
Front Page » Top Stories » Experts note best ways for Miami to tap into the Chinese market 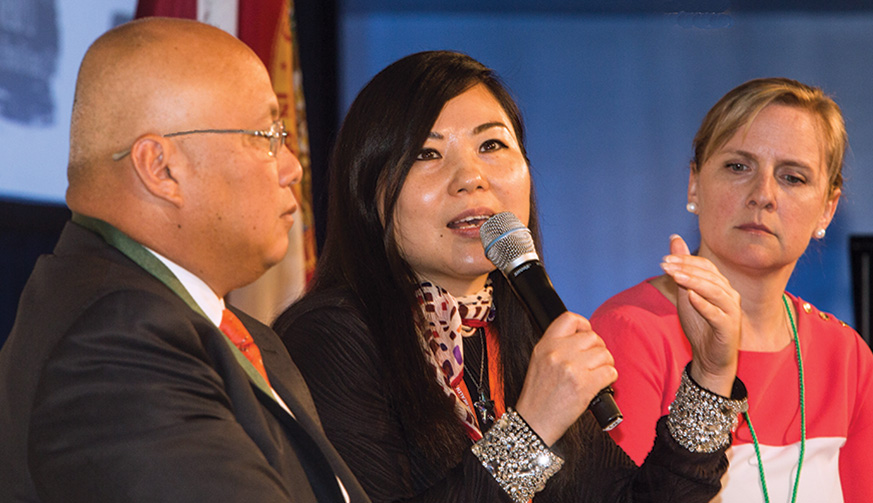 Three Asian market experts suggested that pinpoint marketing and nonstop air links may be the best ways for Miami to tap into the Chinese market while elaborating on growing Miami-China ties as a conclusion to the Greater Miami Chamber of Commerce Goals Conference.

Moderator Mark Rosenberg, new chamber chairman and president of Florida International University, opened the conversation by citing the importance of the foreign investment.

“We expect billions of dollars of foreign investment to pour into the United States,” Dr. Rosenberg said. “It’s important to have a conversation of the role of China and Asia that is connected economically in South Florida.”

Attorney Wendy Li, a partner at New York-based law firm Zeichner, Ellman & Krause, who has worked with multiple financial institutions, spoke about the attracting qualities of Miami that the Chinese admire, which she said will help persuade them to do business in the city.

“Miami has become an important investment force and outlet for Chinese investments,” she said. “Chinese investors have discovered the haven of Miami as people like the beaches and they love the weather.”

Panelist Kristi Shalla, head of investment promotion at Invest Hong Kong in New York, said Chinese industries mainly invest in “visible and prestigious locations” and mentioned that a vital strategy for Miami to lure more foreign investments and visitors is to increase marketing.

“There is a certain level of marketing that needs to be done. There are clear advantages for Miami such as shipping, and to me it is one of the most diverse cities, so marketing is a good step,” she said.

Ms. Li noted that the Greater Miami Chamber has made efforts to boost Miami’s qualities in a trade mission to China. She was involved and noted its success.

“The communication and visits and ties between the two governments could be important to promote economic ties,” Ms. Li said. “Just being visible, to make people know about it, and when there are major projects from Chinese investors, it will add more visibility of Miami to Chinese customers.”

She spoke on how the media can disseminate information to China’s huge population of over 1 billion citizens as a marketing strategy.

“The information can be very conveniently flowed through the media, no matter if it’s a movie, television or newspapers. If Miami has a wonderful relationship with the media, it could help,” she said.

The third member of the panel, Robert Lee, partner at Rimon Law with offices in Miami and Orlando, gave his thoughts on visibility tactics, noting that trade missions have been very successful. He told the audience how PortMiami hosted a delegation of Hong Kong businessmen and a trade mission from China on which members admired Miami’s beauty.

“One comment that struck me was that they did not know how nice Miami is, which surprised me,” Mr. Lee said. “Once they were here, they [found that they] didn’t [previously] understand that the top financial city was in Brickell.”

Mr. Lee stressed that visibility does play a role in attracting investors and that the trips help spread awareness and show that business in Miami will additionally open up other opportunities in South America.

“All of these trips and delegation hosting shows Miami and South Florida and markets what we are,” he said. “The shift to Asia is important, to accentuate that Miami, South Florida, is the gateway to South America.”

The opportunities to connect with the orient are plentiful, yet one reason for a slow rate of success is lack of a nonstop flight to Asia from Miami. Panelists spoke of how there were no nonstops from China to Miami, where typical flights from Asia would have a few stopovers in another US airport before flying to Miami from there.

“We need to have that direct nonstop flight from Greater China to Miami and we are hopeful that will open up a lot of doors and we need to support that effort,” Ms. Li said.

Trade trips have shown some success for North Miami, where they hope to gain an influx of economic opportunities from China after they announced this year that there will be a designated Chinatown district, following the framework of Chinatowns around the nation such as Philadelphia, with an average retail revenue of $125 million a year; Seattle, with an average retail revenue of $41 million per year; and Washington, DC, where tax assessments in 2015 were estimated at $2.5 billion.

Once well-known Chinese banks establish footholds in Miami, Ms. Li predicts that more will follow, along with tourists attracted by the city’s appearance.

“When Chinese investors come to the United States, they focus on the economy as the gateway city,” she said. “Mega investors in China, when they see big banks establishing here, others will follow. And when they see what a beautiful city Miami is, more people will come and buy property here.”