Advertisement
The Newspaper for the Future of Miami
Connect with us:
Front Page » Profile » Meg Daly: Working through matrix to fund $100 million Underline 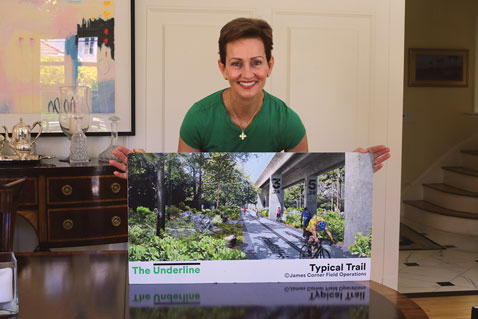 One of the aspects Meg Daly said she finds most startling about the Underline project is the speed it’s been able to move. This is a big infrastructure project, she said; comparable ones didn’t get in the ground for eight years and the Underline will be in the ground in less than three.

It is to transform underutilized land below Miami’s Metrorail into a 10-mile linear park, urban trail and living art destination from the Miami River to Dadeland South.

Ms. Daly’s idea came about literally by accident, one she had on her bicycle, leaving her with two broken arms and unable to drive. She had to get around Miami without a car.

One July day on her way to physical therapy, Ms. Daly got off the train in Coconut Grove and walked below the tracks to get onto 22nd Avenue. She was the only one out there in a large space and said she thought it was the perfect spot for Miami’s version of the High Line, a 1.45-mile-long New York City linear park built in Manhattan on an elevated section of a disused railroad spur called the West Side Line.

Ms. Daly said not only is the Underline about city building, community building and that anyone who lives near a transit station within a 10-minute walk able to get to this park with public transit. She said the health benefit for our community will be enormous.

The Friends of the Underline learned more than half of Miami residents get less than 20 minutes of the recommended exercise per day, she said, and Miami-Dade County is one of the most dangerous places in the nation to walk and bike. If we provide more options for people to walk and bike safely, Ms. Daly said, people will use them and ultimately be healthier.

Miami Today reporter Susan Danseyar interviewed Ms. Daly in her Coral Gables home, her office for the past few years as CEO and president of Friends of the Underline.