Advertisement
The Newspaper for the Future of Miami
Connect with us:
Front Page » Business & Finance » Blumberg Grain contracting for 500 granaries in Egypt, Algeria 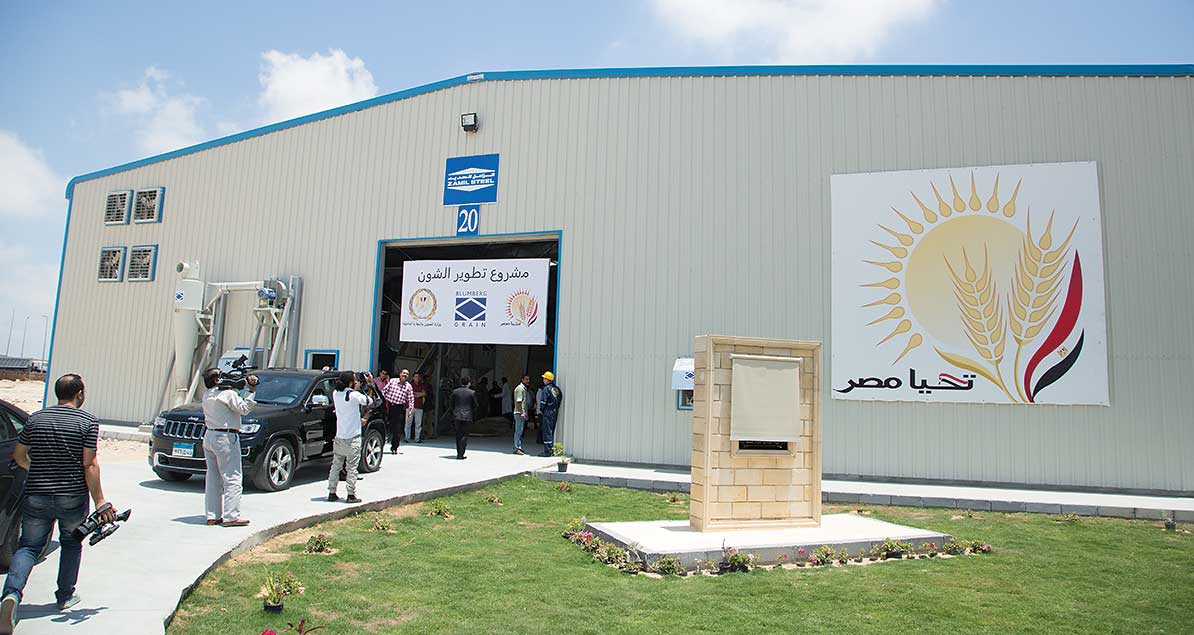 Coral Gables-based Blumberg Grain has struck agreements to contract with Egypt and Algeria for monumental projects in developing one of the world’s largest food security systems to help the governments improve citizens’ food access.

The company’s sophisticated digital platform would create control centers to oversee every facet of grain storage that now takes place in open-air sites that are often built of sand and dirt.

In the past few months, the father-son duo of Philip Blumberg, founder and chairman of Blumberg Partners, the holding company of Blumberg Grain, and David Blumberg, the CEO of Middle East and Africa for Blumberg Grain, met with Egyptian President Abdul Fattah al-Sisi and Algerian Prime Minister Abdelmalek Sellal and agreed to replace their food preservation systems with modernized technology.

These projects would help not only provide food but also reduce waste and post-harvest losses of grain, especially wheat, where globally nearly 60%  is lost due to outdated storage that exposes food to rot.

“We brought food security and a concept of how to secure safely your food that is grown by farmers,” Philip Blumberg said. “I think we can build a better life. For most government officials, food security is on the top of their minds. We can feed them with our technology. We can make farmers more valuable.”

As contract negotiations are ongoing with Egypt and Algeria, the total costs were not disclosed.

The Blumberg Grain technology that would be brought to Egypt consists of the highest levels of grain conditioning, inventory management, grating, access management, security management and a slew of other enhanced features to create ideal conditions for grain handling and storage, said David Blumberg.

This is especially important to Egypt, which is the world’s largest importer of wheat; Algeria is a close second within Africa.

“Egypt buys wheat from farmers all across the country at a subsidized rate that encourages them to farm and harvest. That makes its way to their shouna system, and that is the level Blumberg is playing a role to increase the level of technology and enhance the storage capabilities,” David Blumberg said. “This is a huge program in the space of food subsidies in the world and is one Blumberg Grain is very proud to be a part of, modernizing and making more efficient to the implementation of our technology.”

Agriculture and processing centers are in implementation stages where over 300 centers would be installed under the contract to provide full coverage across 22 of the 27 governorates of Egypt for wheat harvest procurement.

KPMG, which provides audit, tax and advisory services, estimates the project would save the Egyptian government $550 million annually in waste.

“It’s the access to the basic necessities in those countries that are important to the government in power,” David Blumberg said. “And the fastest way for a government in many of these regions to increase the amount of food available, agriculture output, agriculture availability to market is to ensure the product that is produced or harvested in countries is not lost before it gets to the consumer.”

While a definitive timeline has not been confirmed, Philip Blumberg said he hopes construction will be completed in time for Egypt’s next spring harvest.

The project in Algeria is on the same size and scale as Egypt. Algeria also has inefficiencies in wheat storage, according to David Blumberg.

“We were asked to revamp the storage infrastructure and create a modern network of food security for the country’s local wheat harvest,” he said.

In development is a network of 200 facilities all across Algeria to store wheat in bulk. The configuration is different than in Egypt, because Blumberg Grain designed the program to be specific to the environment and context of Algeria.

“The Algeria technology is different in the sense that we primarily focus in Egypt on a bagging technology. For Algeria we are focusing on bulk technology. That is how they handle their wheat,” David Blumberg said.

Blumberg Grain uses an overhead chain and pedal conveyors for the movement of grain as well as wired temperature and humidity sensors that drop through the ceiling and into the piles of grain to read specific information such as temperature and other environmental factors so that the intelligence system can utilize that data to make adjustments at the storage facility to ensure that the grain is maintained in an ideal state.

“For example,” David Blumberg explained, “if our temperature sensors strike a high reading, then underneath the grain aeration fans and tubes will allow cool air from the outside to enter into the warehouse, permeate throughout the grain, moving the heat that is trapped within the grain to the top of the grain piles and then be evaporated through a ventilation system that allows the hot air to exit the building, creating a cooler environment, which is preferable for long-term storage of wheat.”

Data tracked in the center include detection of unauthorized break-ins and abnormal weather. From there operators can enact any protocols to ensure the long-term safety and security of the grain and food products held in their infrastructure.

Algeria has more than 400 sites for locally harvested crops, but these open-air pits and sheds provide poor quality storage. The government today has about 2 million tons of local wheat storage capacity.

David Blumberg expressed hopes that a deal could become final in the next few weeks, telling Reuters at the Global Conference in Dubai that he initially aimed for an agreement before the start of Ramadan, a religious observance practiced by Muslims, fasting for an entire month every day from sunrise to sunset. Ramadan this year began June 5 and ends July 5.

The President of Egypt praised projects carried out by Blumberg Grain in Egypt and welcomed its increased investment in the nation, according to presidential spokesman Ambassador Alaa Youssef.

The president also said he looks forward to completion of Blumberg Grain’s projects in Egypt as soon as possible, especially construction of the advanced shounas, because they serve the agricultural sector, help the government provide food, provide jobs, stabilize prices, help provide various food types throughout the year and avoid crop waste due to poor storage and handling.

Colombia, Ukraine and India are also possible sites for Blumberg Grain’s technologies, with India having one of the world’s largest markets for food security.

Within Africa, Blumberg Grain is looking to expand its presence in Senegal, the Democratic Republic of the Congo and Nigeria, places where contacts have already been made.

Apart from creating better food access, the projects would help combat famine and stabilize the food supply chain, which can incidentally lead to fewer protests or riots, according to David Blumberg.

“In some other cases, as military officials would tell you, the creation of better food security is equivalent to, in essence, combating the rise of extremism, which is propagated by the lack of access to food,” he said. “There are people who are starving, and every day another hungry belly creates a situation where one might be more inclined to join a radical group promising food on the table.”

Blumberg Grain hopes to be able to help the countries it serves.

“Not to be cliché, but we want to try and change the world in the aspect of creating better food security globally,” David Blumberg said. “We are motivated altruistically by the vision and type of work we do and the impact that we will have.”