Advertisement
The Newspaper for the Future of Miami
Connect with us:
Front Page » Transportation » Beach’s Washington Avenue to turn parking into parks 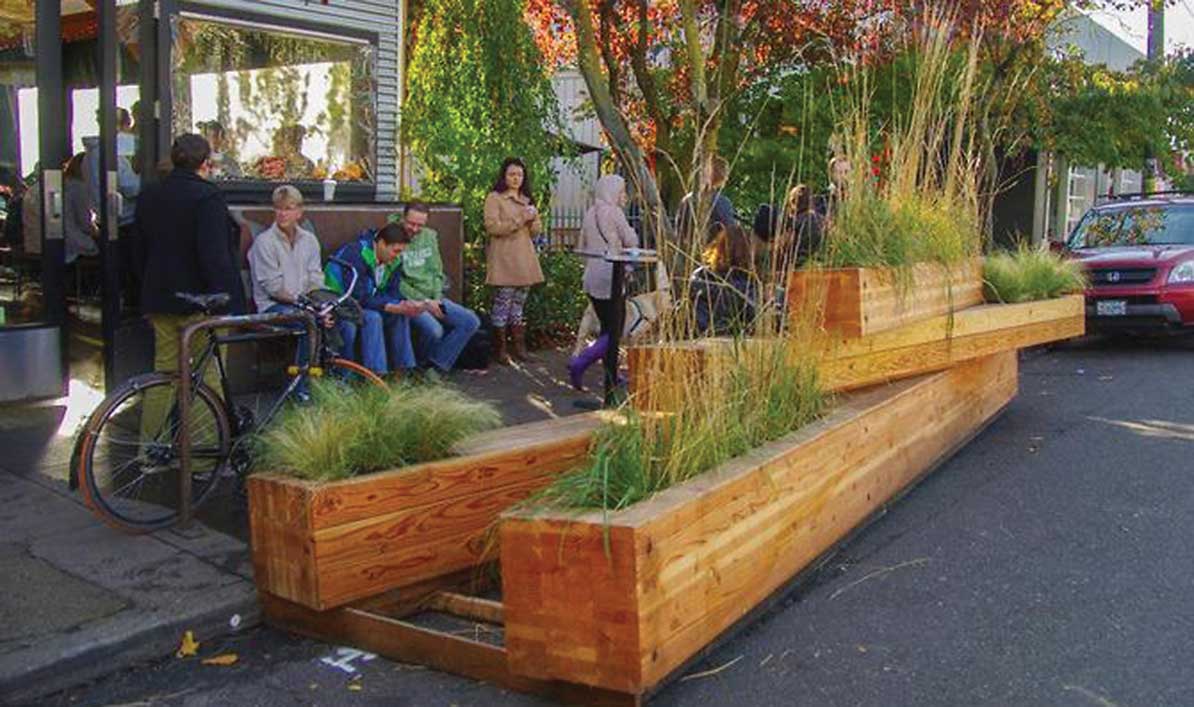 Miami Beach hopes to enhance the landscape of Washington Avenue with a one-year pilot parklet program that invites merchants along the corridor to apply for a parking space to use creatively for the public.

The city commission established the pilot program May 11. Businesses with sidewalk cafes from Washington Avenue Sixth Street to Lincoln Road can submit a sketch of what their proposed parklet would be.

City Manager Jimmy Morales was excited about a program to add another layer of beauty and safety to the city.

“The parklet pilot program provides a path for our Washington Avenue businesses to take individual actions in the development and beautification of our city’s public realm,” Mr. Morales said. “It also reflects our commitment to encourage bicycle and pedestrian-friendly streets.”

The parklet would occupy a street parking space in front of the business establishment. City Transportation Director José González said a typical parking space is 18 to 20 feet long and 7 to 8 feet wide. He also mentioned that the merchant could potentially use two parking spaces for a parklet.

Currently in the pilot program, parklets will only be allowed in front of sidewalk cafes. The parklet could be used to extend the sidewalk café, as a green open space, as a creative public space or whatever the restaurant has in mind.

“This helps restaurants expand their services into the sidewalk and parklet area,” Mr. González said. “It was seen as something beneficial for the restaurants that have sidewalk cafes to be able to expand and repurpose public space in a manner more meaningful and engaging to the community.”

The city is to provide a manual of specific guidelines and criteria when sketching the parklet called the Washington Avenue Pilot Parklet Permit Program. The manual isn’t yet available online, but Mr. González said he hopes it will be soon.

The parklet space would cost the city nothing. The payments, construction and design would come from the individual merchants.

A framework used by the city was Portland and San Francisco’s parklet programs, which Mr. González said achieved “positive results.”

Dylan Rivera of the Portland Bureau of Transportation said their idea of parklets, or “street seats” as Portland calls them, has received approval from the public where many of their spaces have been used creatively.

Apart from extensions of cafes, which have been common, other uses in Portland include “whimsical, creative” use of space such as ping-pong tables, artistically designed chairs and landscaping models.

“It was very successful when we first started. It grew over the years. When people see the creative use of public space, they get inspired to do something on their own,” Mr. Rivera said. “There is definitely a rising interest in this in Portland, where people are concern about the quality of life and wanting to really enjoy public space and not have a street where you pass through or handle dangerous fast-moving motor vehicles, but actually a space that people can relax and enjoy.”

A popular effort by Portland using the space was installing bike corals, a series of four or five bike racks that have been popular among businesses and encourage residents to use bicycles.

“They are like bike parking spaces, and businesses have been requesting to convert parking spaces to more bike corals,” Mr. Rivera said. “We recently installed our 1,000th bike coral. It’s just another way of using our public space for non-motorized uses and community uses.”

San Francisco’s parklet program, called Pavement to Parks, has been in the city since 2010 and has led to more parklets appearing around the city each year. They use underused land by quickly and inexpensively converting sites into new pedestrian spaces to work with local communities.

Like Portland, the goals of the San Francisco program were to encourage non-motorized transportation, enhance pedestrian safety and support local businesses. Robin Abad Ocubillo, who managed the parklet program for two years, said parklets have brought the community together.

“Parklets has helped us learn a lot about how a city can respond to grassroots ideas for creating neighborhood gathering places,” said Mr. Ocubillo. “Every parklet has an incredible community story behind it. Small business owners, nonprofits, schools, art galleries – they’re all banding together in collaborations with the city that honor the cultures and values of each of our unique neighborhoods.”

The City of Miami Beach hopes to follow in their footsteps. With 25% of Miami Beach’s land area serving as public right-of-ways, parklets promote a low-cost, easily implementable approach to improving public space by widening sidewalks and providing amenities while improving pedestrian safety.

“This is a forward innovative idea and concept to help revitalize the Washington Avenue corridor,” Mr. González said. “We are hoping that restaurants are excited about this opportunity to create a livable space within the public right of way that will allow for an expansion of their services.”