Advertisement
The Newspaper for the Future of Miami
Connect with us:
Front Page » Profile » Laurent Fraticelli: Preparing to open new Asia-oriented hotel in Brickell 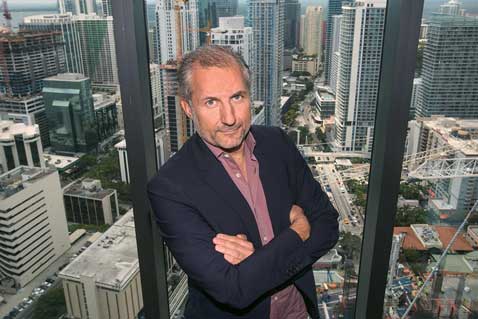 Laurent Fraticelli learned a tremendous amount about how to make people happy while working as a DJ in his hometown of Marseilles. He quickly knew playing the right song created an energy that made people want to drink and dance, he said, while playing the wrong one wrecked customers’ moods and they left the club.

It was an easy, fun way to make money, Mr. Fraticelli said, but eventually he realized there must be a larger scale from which to please people.

That’s when he left home and enrolled at the Lausanne Hotel School – the world’s oldest hotel school – to study hospitality management. He has been working in the industry ever since.

The general manager of EAST Miami for a year and a-half before its opening at Brickell City Centre on May 31, Mr. Fraticelli said he feels lucky to have been part of the planning and organization, working with the architects and designers on every aspect of what he calls the “flow of experience” for the guest.

The concept for EAST Miami is a Zen and very spiritual hotel, Mr. Fraticelli said, so he traveled to China for six weeks when he first joined Swire to visit the company’s hotels in Hong Kong and mainland China, where he observed décor and Eastern influences. This will be the hotel group’s first property in the US and the third hotel under the EAST brand, Mr. Fraticelli said, following EAST, Hong Kong in 2010 and EAST, Beijing in 2012.

This EAST will be very special, Mr. Fraticelli said. It’s part of Brickell City Centre, a mixed-use development spanning more than 9 acres, which he said will further enhance the urban neighborhood, and the idea behind the hotel is to bring Miami life inside.

EAST Miami is connected with the community and partnering with local people, Mr. Fraticelli said, offering guests from afar a home away from home in any of the 352 guest rooms, including eight suites and 89 residence suites; and to locals and travelers an array of activities and destinations including art exhibits, lobby café and bar, and Miami’s first Uruguayan restaurant, Quinto La Huella, via a partnership with a restaurant group from Uruguay called Parador La Huella that has been in Jose Ignacio for 14 years.

Quinto is a word that’s easy to say in every language, Mr. Fraticelli said, even Chinese and Japanese – and he’s expecting Chinese and Japanese to be a large part of the clientele in the hotel as the group is from Hong Kong. It’s an easy word to say in Spanish, French and English, he said. Hence, the name of EAST Miami’s is Quinto La Huella.

There will also be a rooftop bar and ballroom on the 39th floor offering 270-degree views of Biscayne Bay and the city’s skyline.

Miami Today reporter Susan Danseyar interviewed Mr. Fraticelli in one of EAST Miami’s resident suites just days after he and his team received a certificate of occupancy.