Advertisement
The Newspaper for the Future of Miami
Connect with us:
Front Page » Government » Water Taxi Miami heads for Miami Beach’s Purdy Avenue

Written by Marcus Lim on May 10, 2016
Advertisement 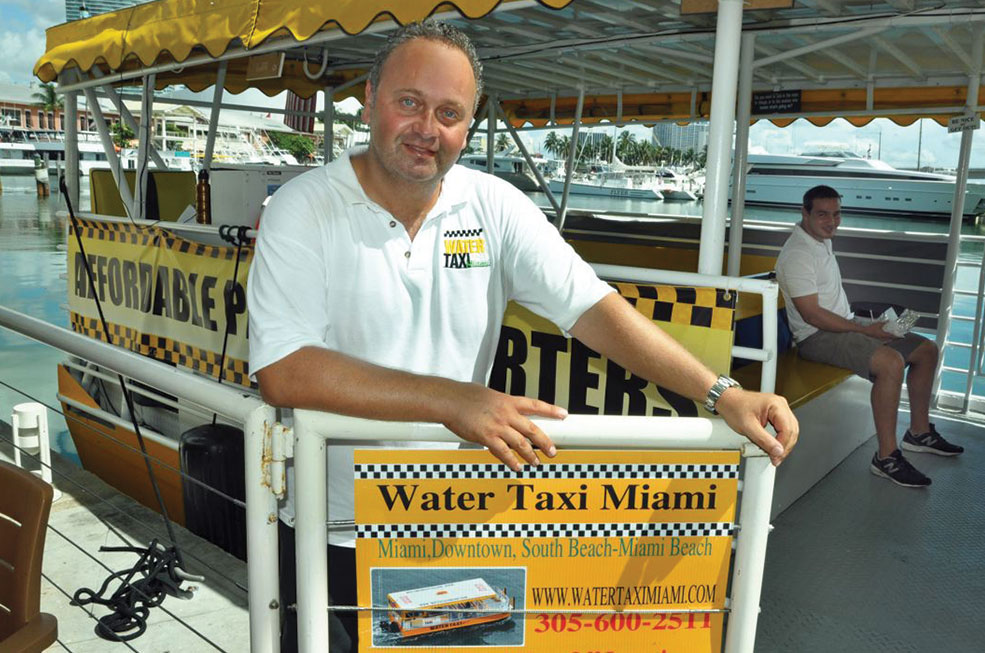 Water Taxi Miami aims to introduce a one-year pilot program to take commuters to and from Miami Beach’s Purdy Avenue Dock by water, adding a route for traveling between Miami Beach and downtown Miami.

This would add a route for the water taxi that has been operating since 2012 and currently links Bayside Marketplace, Miami Beach Marina and Sea Isle Marina.

The Miami Beach City Commission approved the pilot program. Service is to be offered Fridays through Sundays, tentatively from 11:30 a.m. to 7 p.m. with the ability to extend time and increase days if demand warrants.

José González, Miami Beach’s director of transportation, said the waterborne taxi is a good alternative and a more relaxing way of commuting, mentioning that the water has a calming effect and that it saves commuters from going through weekend traffic.

“This connects residents and visitors alike from Miami Beach to the city of Miami in lieu of using our very congested causeways and is a more stress-free way of commuting,” Mr. González said.

A launch date has yet to be announced as the City of Miami Beach and Water Taxi Miami negotiate an agreement. Mr. González said a contract is being drafted and he hopes service will be launched within 60 days.

“The concept of a one year pilot water taxi service was very well received by our city commission and it is something that the water taxi company felt would be a proven way for them to start the service, build ridership and ramp up the service slowly,” Mr. González said. “And that is the intent and goal for the pilot service, to be enhanced to be a permanent full-time water taxi service.”

“We are looking together with the city to turn the water taxi into waterborne transportation to be able to transport people from one side of the bay to another without them using their cars,” Mr. Vlessing said.

A 38-passenger boat and a 49-passenger boat under Water Taxi Miami embark every hour and a half, offering two routes. The yellow route is commonly taken by commuters. The green route, for those who want to see more of Miami, additionally ferries passengers to Virginia Key.

The new service at Purdy Avenue Dock will be included in the yellow route that travels among Bayside Marketplace, Miami Beach Marina and Sea Isle Marina. According to Mr. Vlessing, that option may change.

“We may consider it as a whole separate route, depending on the amount of people who are going to take this,” Mr. Vlessing said. “The more routes and stops you put in between, it will take longer to get from one side to another. We will operate as conveniently as possible for the riders.”

Fares for adults and children over one year of age will be $15 one-way and $30 round-trip. According to the City of Miami Beach, Miami Beach residents identified by the address on their driver’s license, senior citizens and military service members will have a discounted $10 one-way and $20 round-trip fare. A monthly pass is to be $95 along with a $295 annual pass option.

Mr. Vlessing said prices for local residents could dip to $5 because he wants to encourage commuters to use this form of transportation, which also helps cut fuel costs.

“When you think about it, the amount of people the boat moves means that many would not have to drive a car. This saves using fuel and is better for the environment and the economy,” he said. “That is why we have a pilot, to see how many people would use this. We will see what we need to adjust and will accordingly adapt and try to make our services better every time and to fill in the blanks along the way,”

Some already showed that they’re receptive to water transportation: during the 2016 Progressive Insurance Miami International Boat Show in February, 52,224 guests were ferried by water taxis to the event in Virginia Key.

“The amount of people using the water taxi shows that we definitely have a need for waterborne transportation, especially in Miami, where we are surrounded by water,” Mr. Vlessing said. “We hope the need will give us a long-term commitment to the City of Miami Beach.”

Mr. González said he hopes there will be a future for the pilot program in Miami Beach’s plans.

“The city’s goal,” he said, “is to expand the pilot as a permanent commuter based water taxi service.”