Advertisement
The Newspaper for the Future of Miami
Connect with us:
Front Page » Top Stories » All Aboard Florida notified of soil arsenic contamination

All Aboard Florida notified of soil arsenic contamination

Written by Susan Danseyar on May 10, 2016
Advertisement 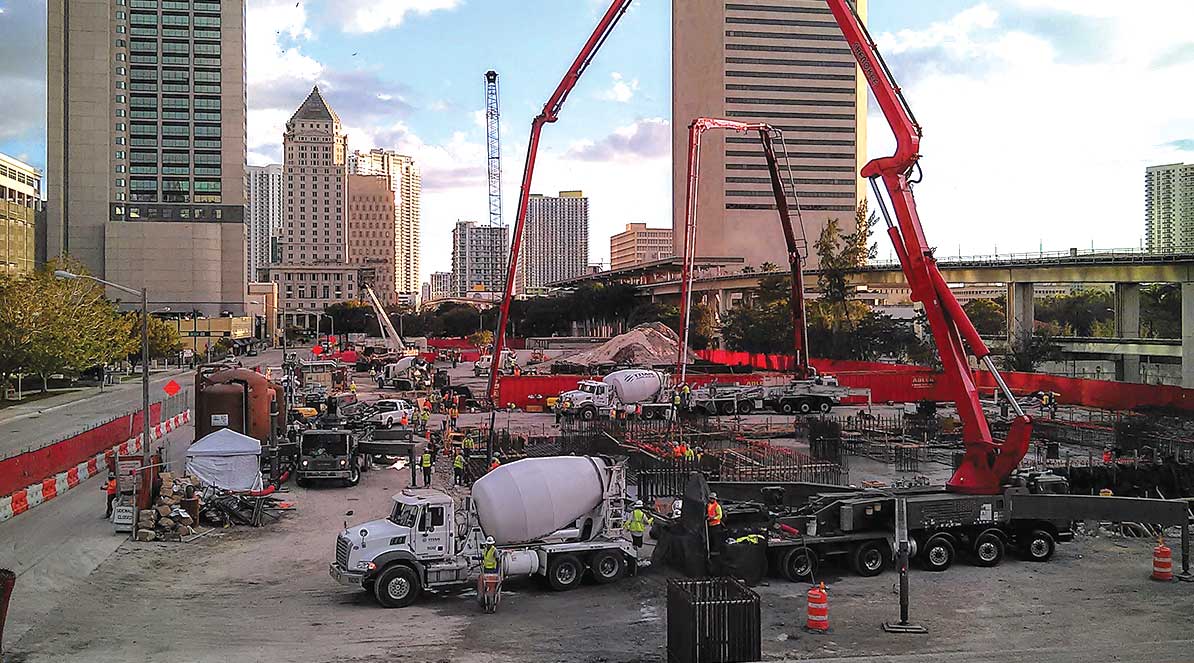 After finding contaminated soil where MiamiCentral is under development, the county’s Department of Environmental Resources Management has notified All Aboard Florida that it must report remedial action it takes but future construction at the site can go on if plans clearly identify that the areas will be accessible for monitoring and remediation as necessary.

The Department of Environmental Resources Management (DERM) outlined in a letter to All Aboard Florida the rehabilitation action required by county law on its downtown land near the northwest corner of Northwest Eighth Street and First Avenue.

The site is currently fenced, and All Aboard Florida was ordered to conduct further soil sampling in two-foot intervals or less to determine if there’s evidence of a direct exposure risk to soil contaminated by arsenic and polycyclic aromatic hydrocarbon.

“We’ve worked closely with Miami-Dade County and appropriate agencies since the inception of this project and are following the regulatory framework put in place for issues such as these,” All Aboard Florida spokeswoman Ali Soule said Tuesday.

In March, Wilbur Mayorga of DERM’s Environmental Monitoring and Restoration Division sent a letter to James R. Hertwig, president of Florida East Coast Industries LLC, that explained the arsenic and polycyclic aromatic hydrocarbon levels collected from an on-site soil stockpile that originated from an adjacent excavation on the south end of the parcel (north of Northwest Eighth Street and west of Northwest First Avenue) exceed accepted cleanup target levels and ordered him to submit two copies of a site assessment report for the division’s review within 60 days of the March 11 letter.

Headquartered in Coral Gables, All Aboard Florida – which is developing the downtown depot and other structures on the site of Miami’s former rail depot to serve a new railway linking Miami to Orlando – is a wholly-owned subsidiary of Florida East Coast Industries LLC.

All contaminated soil was properly and safely deposed of and trucked to an approved off-site landfill, an All Aboard Florida spokesperson said, and any required dewatering was done through a properly engineered and designed water treatment system.

DERM officials told Miami Today on Tuesday that it’s not uncommon to find certain constituents such as arsenic in soils in the vicinity of former or current rail lines due to historic operations (e.g., the spraying of pesticides for weed control, etc.). Polycyclic aromatic hydrocarbons (PAHs) may be associated with the incomplete burning of organic material including coal, oil, gasoline and garbage, they said, and are also found in crude oil, coal tar, creosote and asphalt.

However, DERM officials said PAHs and arsenic are known carcinogens. The likelihood of potentially adverse effects on human health can be attributed to several factors: exposure pathway routes, the degree of contamination and length of time a person is exposed to the contaminant as well as the physical and chemical properties of the contaminated soil, among other circumstances.

The report DERM requires was due May 10. One objective, DERM officials said, is to establish the vertical and horizontal extent of the contamination in soil and, if applicable, groundwater.

The report must include a timeline of the excavation activities at the site; whether any of the excavated soil has been disposed off-site and, if so, how it was disposed, where and analysis of the waste; groundwater sampling for contaminants of concern via the installation of shallow monitoring wells in appropriate locations; along with soil and groundwater samples analyzed for arsenic and polycyclic aromatic hydrocarbon, a subset of which is analyzed for a number of environmental hazards including metals, herbicides/pesticides.

The letter also reports some excavations at the site were inadvertently dug to the water table. Thus, the water had to be pumped out to another excavation to allow for continuation of development.

All dewatering activities were ordered to immediately cease and All Aboard Florida was ordered to contact Mayra De Torres of DERM’s Water Control Section within five days of receiving the March 11 letter to obtain an “after-the-fact dewatering permit.”

Additionally, the site assessment report must include a soil management plan, health and safety plan and dust control plan for the site; a scaled map that clearly depicts the extent of all sampling locations for all excavations, property boundaries and pertinent surface and subsurface site features along with the historical and proposed development features including all proposed drainage features and utility lines; and a $1,350 review fee.

“Be advised that DERM does not object to future construction/development at the site provided that any future development plans clearly identify the source area(s) and areas that will be assessable for future assessment, remediation and/or monitoring,” the letter states. “Furthermore, be advised that [federal Occupational Safety and Health Administration] regulations must be followed by workers during construction to minimize exposure to the contamination existing at the site.”

According to DERM officials, the assessment work All Aboard Florida must do requires – among other tasks – the collection of soil samples to determine the degree and extent of the contamination.

“DERM will have a better understanding of the degree and extent of the impacted media once SAR is submitted for review,” a department spokesperson said. “Once the report is reviewed, DERM will provide comments/directives on the next phase of the cleanup.”

All Aboard Florida is an intercity passenger rail project that will connect Miami to Orlando with intermediate stations in Fort Lauderdale and West Palm Beach. One of its four stations, MiamiCentral’s primary function is home to a new passenger rail service called Brightline. The Brightline station is expected to open in mid-2017. Work is more than 40% completed at this time, All Aboard officials said this week.

Service on the new express inter-city service from Miami to Fort Lauderdale and West Palm Beach is also scheduled to begin in mid-2017.

All Aboard Florida parcels extend northward from Northwest First to Eighth streets, generally west of Northwest First Avenue. The linear stretch was once home to the city’s main train depot.

The company estimates the project would eliminate more than 3 million cars from the region’s roadways each year.

2 Responses to All Aboard Florida notified of soil arsenic contamination