Advertisement
The Newspaper for the Future of Miami
Connect with us:
Front Page » Communities » Rickenbacker Causeway on Virginia Key may get more bike friendly

Rickenbacker Causeway on Virginia Key may get more bike friendly

Written by John Charles Robbins on May 3, 2016
Advertisement 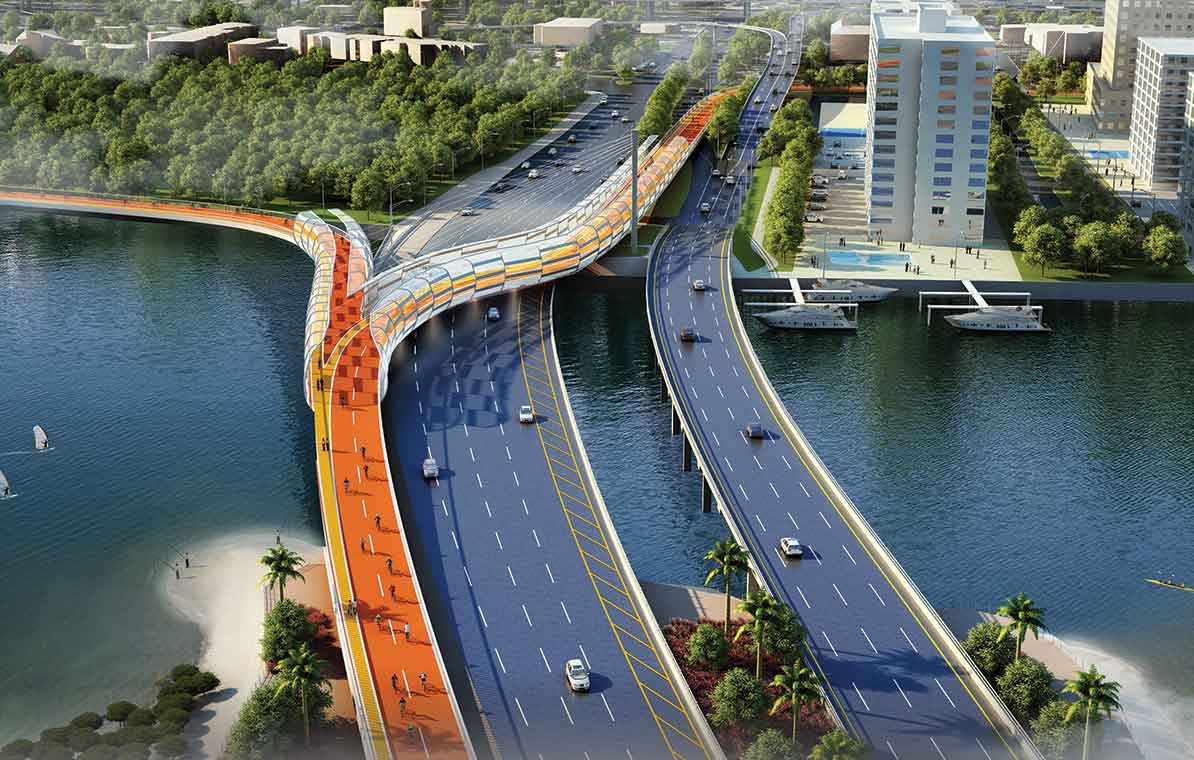 A plan to turn parts of the Rickenbacker Causeway on Virginia Key into a state-of-the-art bike and pedestrian path and parkway has been upgraded.

From Miami architect Bernard Zyscovich comes Plan Z 2.0, and he’s hitting the road with the redesign for new vows of support from elected leaders in the area.

The Key Biscayne Village Council is expected to be the first to see the upgraded plan this month, according to Aymee Zubizarreta, a consultant to Mr. Zyscovich.

The plan basically calls for turning the causeway into a “scenic road through a park.”

The Rickenbacker Causeway has long been popular with bicyclists as it has scenic views of Biscayne Bay and the City of Miami skyline. But heavy traffic endangers cyclists and pedestrians.

Mr. Zyscovich, a cycling enthusiast, is advancing the plan to try and make a safe and secure park out of what today is a busy highway. Cyclists have been injured and killed on the causeway, prompting Mr. Zyscovich to call together his team and begin assembling the pieces that will become Plan Z.

The proposal calls for reducing vehicular lanes on the causeway, from the mainland to the entrance of the Key Biscayne, from three to two and using the newly liberated space for a bicycle and pedestrian path.

The plan received the backing of city and county officials last summer. The City of Miami owns the bulk of Virginia Key, while the county has jurisdiction over the roadway and causeway.

The initial plan was met with some concerns on the part of Key Biscayne officials, said Ms. Zubizarreta, “because this is their driveway home.”

Concerns were expressed about the Powell Bridge and Bear Cut Bridge.

“Like everything in life, they are reaching their level of maturity and these bridges will need to be replaced at some point,” she said.

In December, Mr. Zyscovich was challenged by Key Biscayne leaders to “look at everything from a bigger picture” and design Plan Z as if money were no object, Ms. Zubizarreta said.

The new, bigger and bolder plan would connect to The Underline via Vizcaya’s transit station and the City of Miami’s Alice Wainwright Park.

“The new design that Bernard conceived now also includes a new signature entrance that serves as a skybridge for cyclists and runners who choose to enter the Rickenbacker Causeway either from the north – Downtown Miami or Brickell – or the south… and a running/cycling path along the seawall at Alice Wainwright Park,” said Ms. Zubizarreta.

The Underline is a plan backed by the county to transform about 10 miles of land under Metrorail’s elevated tracks into an urban linear park and pathway.

Plan Z 2.0 also includes an iconic observation deck for cyclists and runners on the William Powell Bridge, as well as nearly 20 acres of identified green space for recreational use along a stretch of the Rickenbacker Causeway, Ms. Zubizarreta said.

Mr. Zyscovich has the support of county Mayor Carlos Gimenez for the updated plan, and Bruce Matheson, spokesperson for the Matheson Family, is backing the proposal, she said.

Mr. Zyscovich is also planning to presented the redesign to the City of Miami.

Miami-Dade County recently applied for a grant to help complete Plan Z’s pilot project, which calls for painting the entire existing bike path green and adding reflectors, from the entrance to the causeway to Bear Cut Bridge. At present, the green bike path appears only in select spots such as conflict zones and then after Bear Cut Bridge as riders approach Key Biscayne.

Ms. Zubizarreta said the Florida Department of Transportation says Rickenbacker is the most utilized corridor in the entire state for cycling and running.

That fact may help Mr. Zyscovich as he works to garner funding for the project.