Advertisement
The Newspaper for the Future of Miami
Connect with us:
Front Page » Top Stories » Miami Parking Authority to centralize valets 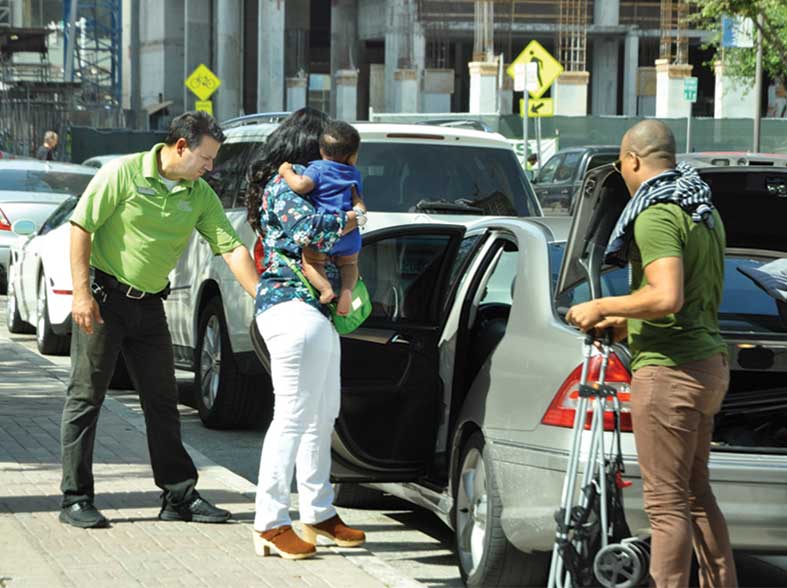 It took some doing, but the Miami Parking Authority has taken the first step to centralize valets to make parking easier for drivers and share in valet parking revenues.

The city’s Off-Street Parking Board last week approved a half dozen potential providers of centralized valet parking using the authority’s on- and off-street parking spaces.

“We’re getting there,” said Authority CEO Art Noriega of the new program.

The initial hubs of centralized valet parking will be in Coconut Grove, Wynwood, Flagler Street downtown and Jackson Memorial Hospital.

The board first discussed centralized valets last October and authorized staff to seek qualifications from operators in order to build a pool of vendors that can be called upon for quotes to create centralized or individual site valet operations throughout the city.

An introduction to the request for qualification stated, “A centralized valet program is beneficial in Central Business Districts and urban areas as it allows for increased business activity while insuring that there are no traffic tie ups or dissatisfaction by patrons who cannot find a space and need to circle. Having a centralized location and one vendor insures efficiency and convenience.”

Mr. Noriega sees centralized valet parking as a revenue opportunity. He said the Business Improvement District boards in the Grove and Wynwood are open to having the parking agency organize a central valet program in their communities.

The program could be site specific too, Mr. Noriega said, offering an example of a public-private partnership between the authority and All Aboard Florida involving management agreements to provide valet parking at MiamiCentral, the new train station under construction downtown.

Gathering the qualified vendors was “quite an exercise,” Mr. Noriega told the board last week.

The first attempt only snagged one interested party, he said.

“After a lot of outreach – coaxing and massaging it – we had a robust response,” he said.

Of the nine respondents, the selection committee qualified six for a pool “that we can tap into” for centralized valet parking services, he said.

Vendors the board approved are AmeriPark, DEC, MAC, Park 1, SP+ and VIP Parking.

The original call for qualifications had a Nov. 20 deadline. After the dismal response, staff tweaked the request and set a new deadline of Jan. 6, and later Jan. 13. Plus, authority staffers actively sought proposals and interest from valet parking vendors.

Revisions on the scope of the work and requirements were published by Rolando Tapanes, director of planning/ development and procurement.

•The provision of parking management must be the primary focus of the business.

•A minimum of five years experience in valet parking management.

•The vendor must have planned, set up, managed and operated valet parking at mass gatherings such as restaurants, hotels and resorts, concerts, stadiums, sports arenas, festivals, health care facilities, airports and office buildings.

•Worked with police and departments of transportation in planning and executing valet parking.

A selection committee used a points system to rate the most qualified companies.

Board member Stephen Nostrand said he was impressed by the extra effort in lining up qualified valet services.

“It’s a good example of reaching out,” he said.