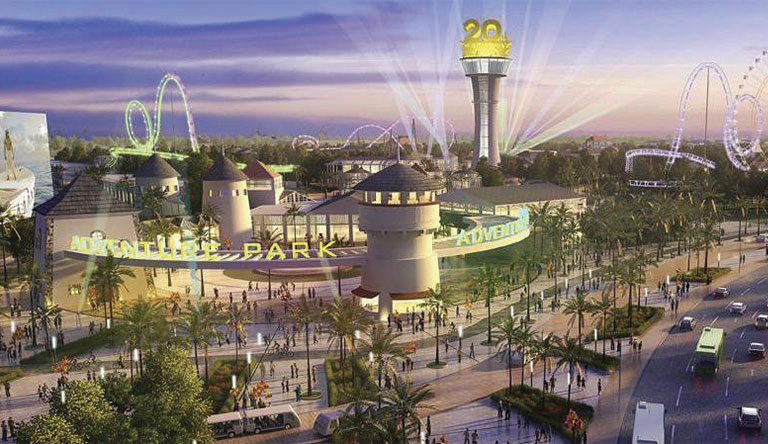 Miami Wilds LLC, approved for a $13.5 million county Economic Development Fund grant, has modified its plans for a theme park in the ZooMiami area should the Miami tiger beetle be listed under the Endangered Species Act.

The U.S. Fish and Wildlife Service announced this month its proposal to list the beetle as endangered after review of the best information possible. Thought to be extinct for over three decades, biologists found the beetle living in pine rockland in 2007 close to land where the proposed theme park was planned. Other populations of the beetle were subsequently found in the vicinity.

Paul Lambert, a member of Miami Wilds LLC, said this week the project has already been impacted just by the proposal to list the beetle as endangered.

Last summer, project partners began evaluating a phased approach – in two parts – to accommodate upcoming environmental surveying on federally-owned land where the Coast Guard has facilities. Development was originally planned there as well as on county-owned Zoo Miami land in South Miami-Dade.

In July 2015, Mr. Lambert said Phase I development, all taking place within existing county property, could include a water park, limited lodging and some retail.

Phase II, he said, could later include development on the adjacent Coast Guard land that would include the theme park and significant retail.

On Monday, Mr. Lambert said the federal review will eventually provide specific boundaries for the beetle’s habitat but the Fish and Wildlife Service doesn’t yet know what they are.

“We can’t move forward unless we know the habitat of the beetle,” he said. “Both the government-owned Coast Guard land and ZooMiami property have pine rocklands, so we’ve already implemented two levels of modification.”

Miami Wilds LLC’s footprint has been shrunk to stay away from any forested area, Mr. Lambert said. “As a stand-along project, it’s still viable as long as Phase I doesn’t fall within the boundary of the endangered species, so for the portion on county-owned land, we’ll only build on zoo property that’s paved or mowed.”

At this time, he said, Miami Wilds LLC recognizes that the Coast Guard portion will take more time to come to fruition for a number of reasons, including the potential for the endangered beetle found immediately adjacent to the land.

Therefore, Mr. Lambert said, plans for Phase II are on hold and the project is focusing primarily on Phase I.

County staff and Miami Wilds LLC are currently negotiating a lease for the county-owned land before going to the county commission for final review and approval.

Mr. Lambert said the entire project was to bring 2,700 to 2,800 jobs for the two properties combined.

Phase I, to be built on the county-owned land, was to bring 403 of those jobs. Mr. Lambert said that number has not changed.

“We are close to an agreement with the county for leasing land,” he said. “From our perspective, but for the beetle issue we would be moving forward with Phase I and Phase II.”

Habitat loss, degradation and fragmentation have destroyed an estimated 98% of the historic pine rockland habitat in Miami-Dade County, with only two known Miami tiger beetle populations remaining, according to the Fish and Wildlife Service.

Staff from the county’s Department of Environmental Resources Management said development at Miami Wilds that might affect the Miami tiger beetle would require approval from the Fish and Wildlife Service to avoid, reduce or mitigate potential impacts to a protected species or to ensure actions don’t negatively affect protected species or modify their habitat.

Depending on the proposed impact of the project, staff said via email, the Fish and Wildlife Service may require the property owner or applicant to minimize the impact and modify the site plans to avoid negatively impacting the beetle.

Mr. Lambert the project made changes to the project to avoid negatively impacting a protected species well before notice of the specific boundaries where the beetle lives, and it has no intention of disturbing the beetle’s habitat.

The county commission had long sought development of a major attraction beside ZooMiami. The Miami Wilds project was chosen several years ago from among applicants to negotiate for and develop the attraction.