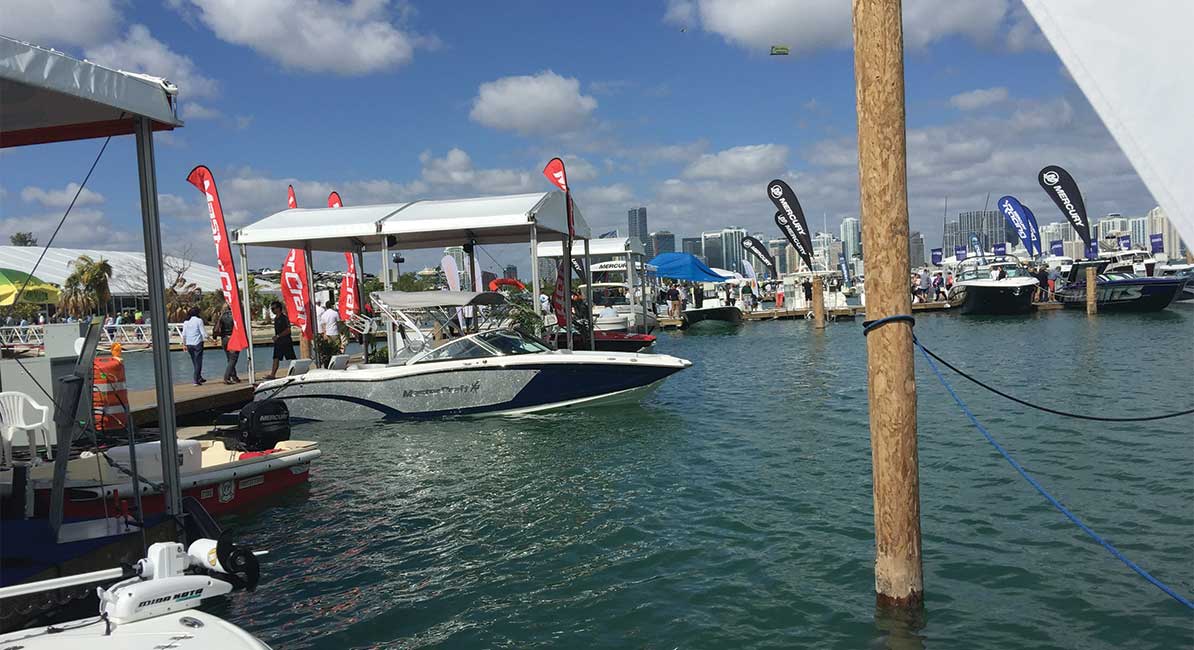 Miami city commissioners were impressed last week by details of the mass transit plan put into place for the Miami International Boat Show in February.

Held on the same weekend as the Coconut Grove Arts Festival, critics predicted massive traffic jams and a potential cutting off of Key Biscayne from the mainland with the boat show traffic sharing Rickenbacker Causeway.

Boat show and Miami-Dade County officials said the roads saw a modest increase in motor vehicles but no major problems from the influx of thousands of visitors.

The boat show’s Maintenance of Traffic Plan was reported as effective, ensuring that traffic to and from Key Biscayne flowed throughout the event via lanes designated for Key Biscayne traffic.

Alice Bravo, director of Transportation and Public Works for the county, presented the city commission with a post-event report on traffic during the show. Miami Mayor Tomás Regalado had asked for the follow-up report.

The boat show organizer, the National Marine Manufacturers Association, partnered with city and county police to handle the traffic.

More than 53,000 people were transported to the boat show’s new venue on Virginia Key by a fleet of water taxis, representing more than half of the 100,000-plus who attended the event, according to the association.

Another large number of attendees was transported to and from the city-owned site around Marine Stadium on shuttle buses. More than 78,000 people were transported by shuttle bus to the show site from downtown.

Commissioner Frank Carollo said, “A hundred thousand visitors to the area and 80% use mass transit. I think that’s pretty impressive.”

He said the success of alternate forms of transportation illustrated that “we can change the culture of using our cars” to get everywhere.

Mr. Carollo said he traveled on that Saturday afternoon to the boat show and saw no problems with traffic.

“There was no backup,” he said. He’s attended the boat show for years, he said, when it was held primarily inside the Miami Beach Convention Center. Mr. Carollo praised the new event space on the water and land surrounding Miami Marine Stadium for being more conducive to a marine-related event.

•Police presence at all intersections.

•Pedestrian fence along the beach side to avoid pedestrian crossing at undesignated areas.

•Operation of a central control center for the event.

•Restricted parking locations at the location.

•Park-and-ride locations within the city with free shuttle service.

Officials used traffic cameras, high-tech monitoring devices and on-the-street observations in adjusting law enforcement personnel to various locations and duties with the goal of keeping traffic moving. Tracking devices were placed at South Bayshore Drive and 26th Road, and the traffic signal at the entrance of Mast Academy.

Commissioner Francis Suarez said he would echo the praise from Mr. Carollo.

Mr. Suarez said the traffic management plan that was put in place by the association, the city and the county was “robust” and “on another level.”

Mr. Suarez added, “It’s hard to dispute the facts and images. Kudos to the boat show people for taking it seriously, especially considering the waterborne transportation.”

The association invested more than $800,000 in the comprehensive traffic plan, focusing a large part of the plan on the park-and-ride model, which proved effective with an estimated 80% of boat show attendees parking at designated offsite locations and arriving via shuttle bus or water taxi.

The county study found there was an average of 5,000 additional cars on the Rickenbacker Causeway each day of the event compared to the same period in 2015, a figure that parallels the estimated 4,000 pre-paid boat show parking spaces that were available on Virginia Key and shuttle traffic.

“We are very pleased with the extraordinary joint effort that was put forth by the NMMA, the City of Miami and Miami-Dade County,” said Ms. Bravo. “The success of the boat show traffic plan demonstrates that with good planning, coordination and dissemination of information, multiple agencies and organizations can develop and implement a plan that avoids significant traffic issues. This will be a model for other major events in Miami-Dade County.”

“We demonstrated that you can move a lot of people using mass transit,” Ms. Rick-Joule said.

While long waits were reported for some water taxis and shuttle buses, improvements were made each day to keep them moving more smoothly and the boat show organizers say they will be making additional improvements for the 2017 show to eliminate long waits.

“We were excited to see so much enthusiasm for the park-and-ride service, especially for water taxis. We know that in many cases, attendees waiting for a water taxi were offered shuttle bus rides but were willing to wait to be able to arrive to the show by water,” Ms. Rick-Joule said.

“We came away from the 2016 Boat Show with lessons on how we can eliminate long wait times for next year.”