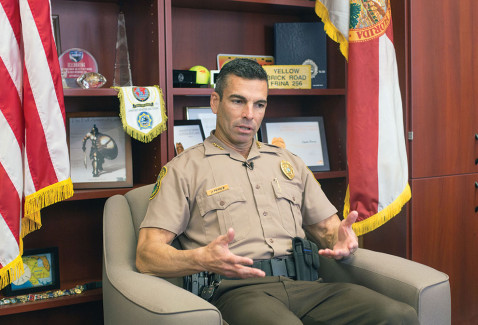 Juan Perez knew he needed to put himself through college, so after graduating from high school he took a security job at Burdines, then the leading Florida department store chain. He was a store detective while taking criminal justice courses at Miami Dade College and it turned out he had a sixth sense for picking out shoplifters.

Mr. Perez quickly rose in the ranks during 3½ years at the store and then was hired by the police department and realized he was good at this type of work and enjoyed it.

After 25 years with the Miami-Dade Police Department, Mr. Perez was named director Feb. 1. He now manages one of the largest police agencies in the nation.

Mr. Perez said it’s one of the most rewarding professions, even though police aren’t rewarded very often. People see police at their worst times and may not like them, he said. However, whenever a person calls 911, Mr. Perez said, police respond and can save lives.

It’s not necessary to be publicly recognized for such service, he said, because the reward comes in making a difference for the community’s benefit.