Advertisement
The Newspaper for the Future of Miami
Connect with us:
Front Page » Top Stories » 513-condo arts area condo by NR Investments begins 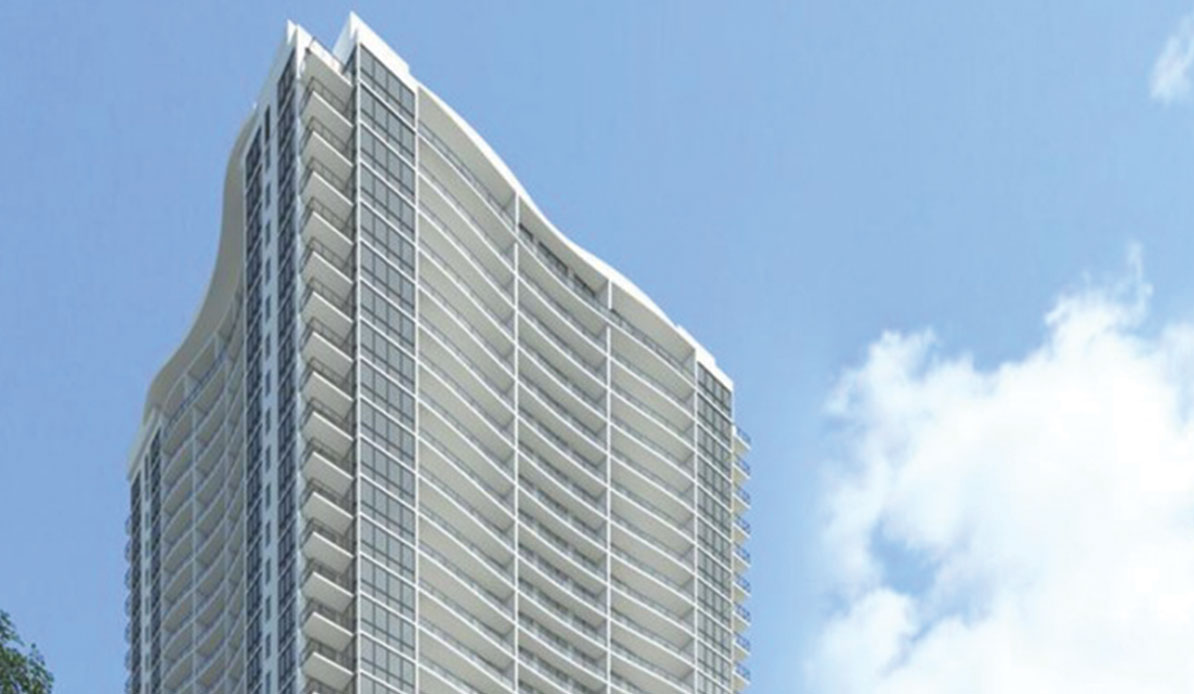 NR Investments has begun work on a mixed-use project designed to bring renewed life to a long-barren section of Miami.

A groundbreaking was held in February for CANVAS, 513 condominiums in the heart of the city’s fledging arts and entertainment district.

The company, which says it’s bringing affordable luxury to the area, recently announced that the 37-story CANVAS is 58% sold with $120 million in sales.

Work has commenced at the 1600 NE First Ave. site.

The neighborhood, for the most part, has remained stagnant for the last half-dozen years and city officials hope this project can lead the way to further growth.

The property is bounded by Northeast Miami Place, Northeast First Avenue, Northeast 16th Street and Northeast 17th Street. It is just a few blocks from the Adrienne Arsht Center for the Performing Arts.

CANVAS gained the backing of the Omni Community Redevelopment Agency in June 2014. The following month, the city commission approved a partial alley closure that cleared the way for work to begin.

Pieter A. Bockweg, CRA executive director, said then that work might begin by June 2015, with a targeted opening sometime in 2017.

The developer adjusted its schedule based on sales, and with a Feb. 15 start the company now anticipates delivery of units in March 2018, according to Nir Shoshani, co-principal of NR Investments.

He said the project has a 24-month construction schedule.

Asked why groundbreaking was delayed, Mr. Shoshani said, “We set very ambitious pre-sale goals from the onset, and until those benchmarks were met -– and they were – we adjusted our groundbreaking timeline accordingly.”

He also said CANVAS went through a 12-month pre-construction period.

“We do not see ourselves as a luxury condo – rather, an affordable luxury one,” said Mr. Shoshani. “As such, although the market has cooled off, we do expect sales to continue at a steady pace, up to the selling-out of all units.

“Although there is a cooling of the market, we are experiencing a higher level of interest and movement within the project and sales center since the beginning of the year,” he added.

With prices starting in the mid $300,000s to the $550,000s, the company says CANVAS will introduce affordable luxury to the area and will complement the neighborhood’s existing 81-unit loft building, Filling Station Lofts.

Mr. Shoshani said the initial plan for CANVAS has not changed. It is to include 513 residential units, 10,000 square feet of ground floor retail and about 5,000 square feet devoted to rooftop commercial uses, he said.

Mr. Shoshani also mentioned a “three-concept food and beverage” entity named Otabe, put together by a partnership between Kevin Aoki, Roman Jones and NR Investments. The three concepts will consist of a Japanese grill (Teppanyaki), noodle bar and a compressed juice bar concept, he said.

CANVAS is designed with neutral tones so that residents can customize their home based on their personal style. Residents will have the option of five floor plans ranging from 620 to 1,150 square feet, along with amenities such as gardens, children’s playrooms, and fitness and business centers.

The building stands to fill a void for young professionals seeking a sense of community, easy access to public transportation, mixed-use retail and affordable residential options, the company says.

Helmed by its two principals, Ron Gottesman and Mr. Shoshani, NRI has acquired more than 5,000 commercial and residential units since its inception and currently has about 1 million square feet of rental and converted office condominium product on the market.

In the essence of not only creating a building but creating a community for residents and neighbors, CANVAS has been host to numerous cultural events in the past year and a half. NR Investments works with area officials and cultural partners to host seasonal programming and events – including the Miami Flea, acoustic performances, live art sessions and more.

The company sees the area as a burgeoning walkable and bike-able “urban village” in downtown Miami, bordered by popular neighborhoods including Wynwood, the Design District and Brickell.