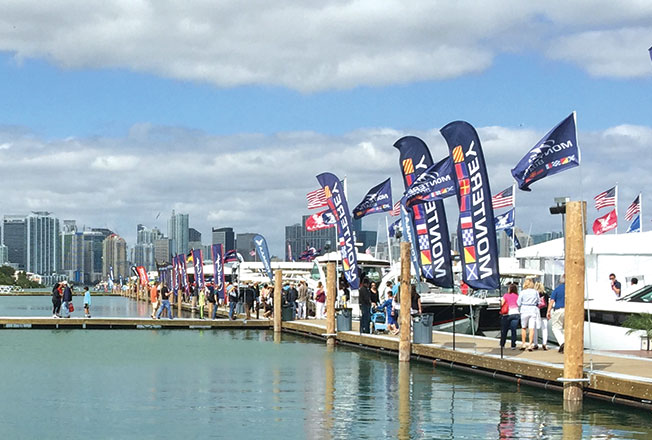 What better way to get to a boat show than by boat. That seemed to be the consensus of many who ventured to the 2016 Progressive Insurance Miami International Boat Show at its new Virginia Key site.

Show producer the National Marine Manufacturers Association lined up a fleet of water taxis in various shapes and sizes in a quest to keep vehicle traffic flowing to the island and beyond to Key Biscayne.

The move was deemed very successful, with some 52,224 people transported by water taxi, according to Cathy Rick-Joule, boat show director, more than half of the 100,000-plus attendees.

Miami Commissioner Wifredo “Willy” Gort, who has championed expanding water transportation in the area, asked about the number who took advantage of the water taxis.

The show was assessed at the start of the city commission’s Feb. 25 meeting, attending by Ms. Rick-Joule.

“Everyone said the public transportation would not work. It worked fabulously,” Ms. Rick-Joule said. “The only problem was, we couldn’t keep up with it. It was more popular than we could have possibly imagined,” she said. But that is “fixable,” she said, “and we are excited about that opportunity.”

The five-day event was held over Presidents Day Weekend, on city-owned property and the water surrounding Miami Marine Stadium.

The city entered into a license agreement with the National Marine Manufacturers Association to stage the 2016 event on land and water surrounding the stadium. And the city spent more than $20 million to improve the area around the long-idled stadium into a flex park for multiple uses after the boat show.

City Manager Daniel Alfonso was the first to bring up the show at the Feb. 25 meeting, when he said he wanted to thank and recognize city staff, police and others who worked hard to make the show succeed.

“There was a lot of concern about how the boat show was going to go, and what issues there were going to be, but you know what?… It was really an all hands on deck effort,” Mr. Alfonso said, launching into a list of facts about the show.

“We had over 100,000 visitors, folks came from 35 different countries, and over 200,000 hotel nights were registered related to the boat show in the surrounding area,” he said.

The city manager referred to cooperative efforts of the association and city personnel. And he pointed out the association spent about $800,000 to hire off-duty police and to manage the traffic.

“This was an unprecedented amount of resources devoted to it – and they stepped up. It worked out well,” he said.

The mayor asked the boat show producer to come a March commission meeting to show an hour-by-hour report of how traffic flowed on the causeway during the event.

“We want to show that by working together and organizing the traffic with Miami-Dade police, with City of Key Biscayne police and City of Miami police, it really worked,” the mayor said.

“It was absolutely amazing to stand side by side with all of you to create this event,” said Ms. Rick-Joule.

“Together we produced a spectacular, world-class boat show that attracted more than 100,000 people from around the globe, in a time limit no one believed was possible. Thank you for accomplishing what we believe no other city in the world could have accomplished.”

The success of the water taxis to ferry attendees to and from the venue led Mr. Gort to mention plans to bring up a pocket item – one not on the agenda – related to water transportation, later in the meeting.

But the item was postponed as the commission held a marathon meeting.

In the recent past, Mr. Gort has discussed the value of using the area’s waterways for transportation, in further efforts to unclog the roads and highways in the area. Last year he tried to encourage the Miami-Dade Metropolitan Planning Organization to study the feasibility of water transportation.

“As of now, there is no organized water taxi transportation in the City of Miami, or Miami-Dade County for that matter. And we live with water, we are surrounded by water… it’s a no-brainer [and] it was the boat show that started this conversation,” Mr. Regalado said.

The 100,279 attendees, up 4% over the 2015 show, helped the show celebrate its 75th anniversary. Exhibitors reported strong sales, with many citing increases from 20% to 400%, according to the association.

The year show also sparked momentum to restore the Marine Stadium, with an estimated 100,000 people either being reintroduced to the landmark for the first time in years or seeing it for the first time. The National Trust for Historic Preservation, Dade Heritage Trust and non-profit Restore Marine Stadium Inc. jointly operated an informational booth in front of the structure, where they gathered 2,300 signatures in support of Marine Stadium restoration.

Plans are under way for the 2017 boat show to be held at Miami Marine Stadium Park and Basin from Feb. 16-20.

Three days after the conclusion of this year’s show, the Village of Key Biscayne announced it had filed a new lawsuit related to the show, this time taking on Miami-Dade County government for allowing the show to turn public park land into an exhibition center.

“As city and county officials conduct their ‘post-mortem’ on its impacts, there is no appropriate decision but to relocate the boat show to a more appropriate venue next year,” she said. “With this lawsuit, we hope the county finally comes to its senses and puts the will of its taxpayers and need for public park land ahead of short-term profits.”