Advertisement
The Newspaper for the Future of Miami
Connect with us:
Front Page » Top Stories » Venetian Causeway to reopen Monday 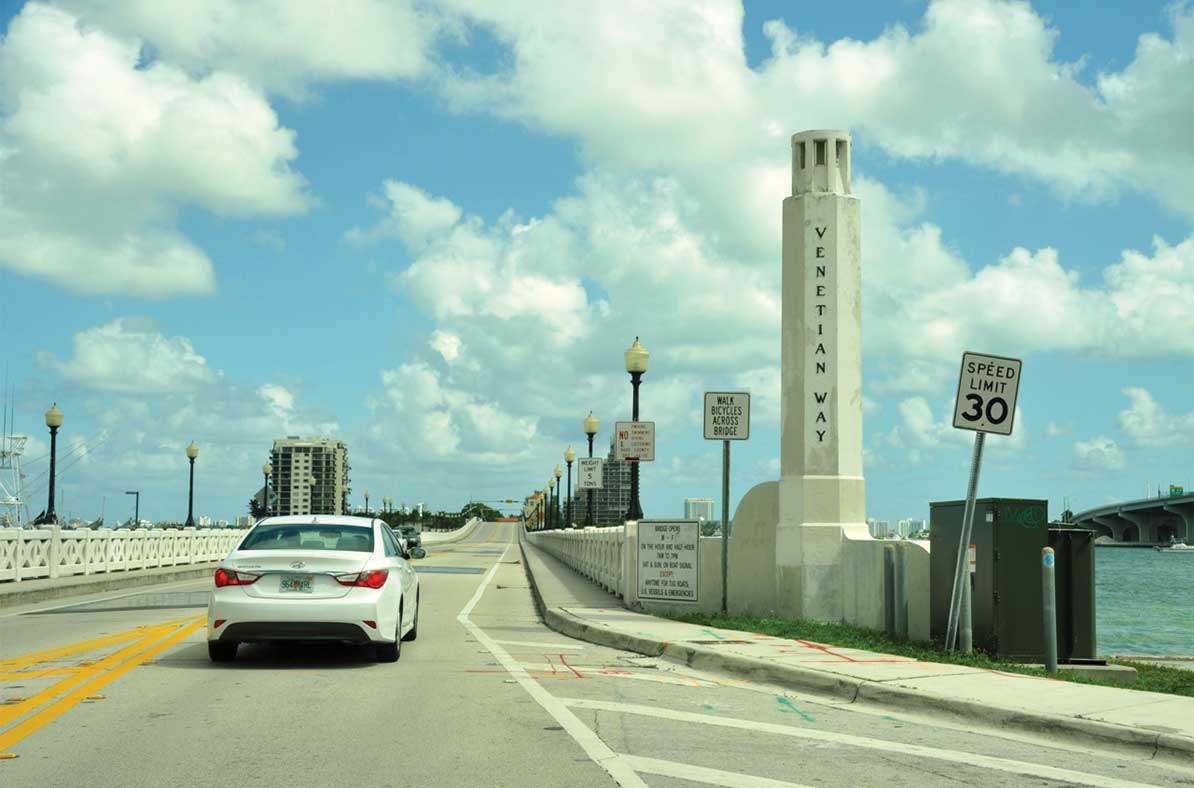 The Venetian Causeway, a vital artery connecting Miami Beach to the mainland, is ready to reopen after several months of repairs sent motorists and cyclists to two other busy routes.

Reopening is due Feb. 29, weather permitting.

“We are very excited about the reopening of the West Venetian Bascule Bridge,” said Karla Damian, media and public relations officer with Miami-Dade County’s Department of Transportation and Public Works.

County officials hope to have a ribbon-cutting to mark the reopening, she said.

The 12-bridge causeway, built in 1926, wends its way through a cluster of 11 man-made residential islands. Ten fixed bridges and two bascule bridges make up the causeway.

It’s Florida’s oldest causeway. Some of its historic characteristics include the arched form of the superstructure, the railings and the light poles.

The West Venetian Bascule Bridge Rehabilitation Project replaced the causeway’s westernmost portion by removing 730 feet 9 inches of the structure, disposing of it in an artificial reef and replacing it with a new bridge.

During construction the causeway was closed to motorists, pedestrians and cyclists.

Because there’s been no access to the Venetian Causeway from the mainland, travelers to Miami Beach and the Venetian islands from mainland Miami used the MacArthur Causeway (I-395) or the Julia Tuttle Causeway (I-195).

County officials say weight limits on the Venetian Causeway have been lowered from 15 tons to 11 on all bridges except the easternmost bridge that connects Belle Isle to Miami Beach. The weight limit on that bridge was increased to 16 tons.

The county hired GLF Construction Corp. to replace the affected segment of the western bridge. Actual closure began June 1, 2015, and was expected to last up to nine months.

The estimated cost for demolition and replacement of this segment is $12.4 million. The work is projected to add 60 years to the life of the bridge.

With the western end repaired, what’s the next step to maintain the causeway?

The Florida Department of Transportation is doing a Project Development and Environment study that’s to be done in July 2017, said Ms. Damian.

This study makes the future bridge rehabilitation and replacement eligible for federal funds, she said.

After the study, design would begin in earnest. That would take two years for needed permitting, historic coordination, public involvement efforts and so on.

After the designing, if construction money were available the state would advertise and procure a design/build contract, Ms. Damian said. Because federal and quite possibly state funds will be involved, a local agency participation agreement would be needed and the Florida Department of Transportation would have to sign off on it, she said. That process will probably take a year.

If construction money is available, county officials anticipate the earliest start would be in July 2020.

The total cost isn’t known because whether to rehabilitate or replace the structure would be decided after the study. The replacement option could cost around $100 million, said Ms. Damian.

In the interim, she said, the bridges need significant maintenance such as rehabilitation of the east bascule bridge’s mechanical/electrical systems, currently under design, as well as significant structural repairs to 11 of the 12 bridges.

Miami-Dade County has jurisdiction over the causeway but the state is doing the study because the state could facilitate federal funding for causeway construction.

Meetings were held in May 2015 with Venetian islands residents who rely on the causeway to determine their preference for improving the aging causeway: do nothing other than routine maintenance, rehabilitate the bridges, or replace all or parts of the bridges, according to state officials.

Replacement ranked first with 16 votes; rehabilitation second with nine votes. There were no votes for the no-build alternatives, said a newsletter from the state transportation department.

In 1989, the Venetian Causeway was included on the National Register of Historic Places. Additionally, the cities of Miami Beach and Miami have designated the causeway as a local historic landmark.