Advertisement
The Newspaper for the Future of Miami
Connect with us:
Front Page » Government » Upset commission defers report on PortMiami’s southwest corner 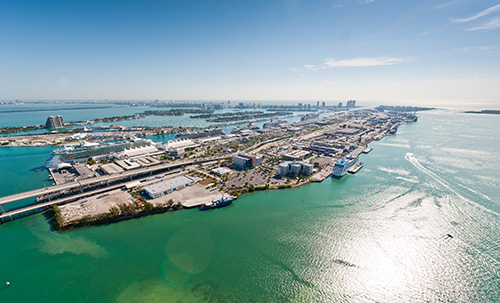 County commissioners upset with Mayor Carlos Gimenez’s handling of their directive to seek proposals for developing PortMiami’s southwest corner agreed to defer accepting his report detailing ways he’s looking for the valuable land’s best use rather than sending a negative message by rejecting it.

Last week’s 10-0 unanimous vote to put off action until a workshop or special meeting is scheduled came after lengthy discussion concerning the decision Mr. Gimenez made to seek stakeholder input on best use for the coveted property. Commissioners Juan Zapata, Javier Souto and Jose “Pepe” Diaz were absent.

At issue for several commissioners is their concern that the mayor’s instruction that any uses by the port of its 11-acre corner remain consistent with traditional maritime activities and that Director Juan Kuryla meet with stakeholders to hear their ideas before presenting findings to the commission is a “stall tactic” that disrespects them and their authority.

Mr. Gimenez, on the other hand, said the commission’s resolution last fall ordering him to prepare a solicitation, subject to legal restrictions, for the expedited development of the southwest corner consistent with the 2035 master plan for the seaport came in response to circumstances that now differ.

He told Miami Today in January that much has changed since the master plan was put together in 2011, which included potential commercial development for the bare land. At that time, Mr. Gimenez said, the port needed money and was about to issue new debt.

However, between 2010 and 2013 port revenue soared 31% and its southwest corner is no longer vital for revenue, Mr. Gimenez said. Additionally, he said, title searches revealed half-century-old state and City of Miami deed restrictions. Of particular concern is the City of Miami’s stipulation that the land must be used for seaport purposes or it reverts to the city.

Mr. Gimenez outlined this information in a Feb. 4 report to commissioners and said he will return with an update on what the stakeholders recommend, probably in April when port officials estimate they will have completed discussions with the five remaining stakeholders. To date, Mr. Kuryla said, he’s had discussions with 10 port partners including the largest cruise lines and labor. “The responses are somewhat varied, depending on who you speak to,” he said. In one instance, however, the harbor pilots said Mr. Gimenez’s plan makes sense because the one thing the port has that nothing else in the county does is access to water.

“The demands of the port have substantially changed over time,” Mr. Kuryla said. “If you asked me what’s the biggest need the port has right now it would be cruise terminals.”

Bruno Barreiro began the often-heated conversation lasting almost two hours by saying he doesn’t like the report nor the way Mr. Gimenez handled the commission’s directive and made a motion to not accept it with the intention of continuing discussions.

He said the number-one priority for the commission’s directive in expediting the process for proposals was making sure anyone who bid knew it was pending the release of the reverter clause from the City of Miami.

Barbara Jordan seconded Mr. Barreiro’s motion, and said she did so because she expected to see an expedited request for proposals to come back rather than the mayor’s report, which “disrespects” the commission’s directive.

In fact, Ms. Jordan said she finds it a “stall tactic” to receive a report that’s well overdue only to read Mr. Gimenez will be ignoring the directive and instead seek input on future port needs when a number of studies have already been completed on uses that would be port-related.

She said she agrees with taking care, given the reverter clause. “What I do not agree with is using that reverter statement as a scare tactic because that’s what I believe is happening.”

Nothing in the motion Xavier Suarez put forth mentions anything commercial, Ms. Jordan said. “It just said to bring back an expedited process within what was legally acceptable.”

However, she said, “instead of bringing back an expedited process, the report says we’re going to do more studies and [use] other stalling tactics we employ when we don’t want to do something.”

Mr. Suarez said he’s not sure he’d call the parties port officials are speaking with “partners” when he thinks of them more as tenants. “The mayor is right: We have to toe the line very carefully with the deed restriction,” he said. “All we have to do is make sure we have maritime uses.”

To say the county has to spend more time to be compliant with ‘partners’ is not sensible, Mr. Suarez said, because he’s met with at least one group that spoke about bringing billions of dollars in investment that would be maritime use.

“I don’t know if anyone is dragging their feet on purpose,” Mr. Suarez said. “But we do need to use that facility. It’s one of the prime locations for freight or passenger activities, so let’s have those discussions and come back to us with a use.”

Mr. Suarez added he was never in favor of commercial use.

It’s the last piece of port ground to be addressed, Mr. Gimenez said. Without the need for revenue from it and the restrictive deed, he said the prudent course of action is “let’s keep the port as a port.”

The county doesn’t know what the port will need in the future, Mr. Gimenez said, so he thinks the best course of action is to speak with those who use it and get their ideas on what port needs will be once the expanded Panama Canal comes into use.

If the county goes forward now with commercial development, he said, it could lose the port because it will revert to the city.

“The county does hold a reverter clause with the City of Miami that they want with the Marine Stadium which they’ve broken, but I don’t want to play that game right now,” he said. “Yet I also believe even without a reverter issue, we should be looking at the property with our port partners for uses that enhance the port property.”

Mr. Barreiro said he can understand the mayor not wanting to push the issue of the reverter clause the county holds with the City of Miami. “I know it’s tough during times of politics and re-elections, but I think it’s time to show some strong leadership and push on issues that are beneficial to all entities in the county.”

Without specific guidelines that spell out what could be built on the property, Mr. Gimenez said, no one would submit a proposal. Therefore, he said, he needs to have a better idea of what the port stakeholders consider best use for the port before seeking proposals.

“I want to make sure we do this right, not fast,” he said. “Why not take our time? It’s the last piece. Let’s figure out what really needs to go there that will be best for the port in the future. Once it’s built, it’s built and we can’t take it back.”

However, Mr. Gimenez said, if the commission wants to go in a different direction, he’ll try his best to comply.

Certainly, he said, the county has a reverter clause on property that’s important to the City of Miami. Should the commission decide to take the route of discussing what the reverters mean to both parties, Mr. Gimenez said, he’ll need commission guidance on how to approach the issue.