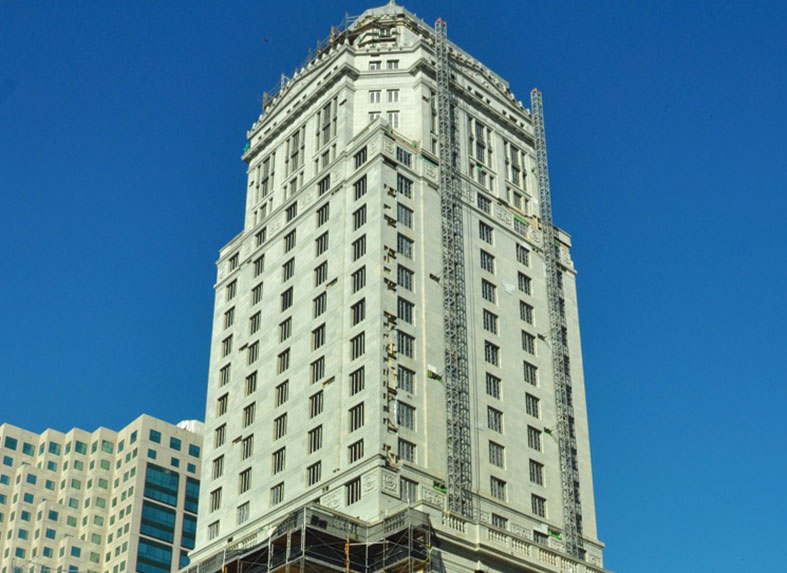 A task force to survey Miami-Dade’s trial court infrastructure concludes the civic court should be in a purposely-built structure with 21st century attributes and that the historic building at 73 W Flagler St. can no longer support its functions.

The Miami-Dade Court Capital Infrastructure Task Force’s final report, sent to the county commission this week, states the “Dade County Courthouse is no longer able to support the operational and spatial needs of the civil court and related functions in an environment that is functional, flexible, secure, accessible, dignified and technologically current.”

The seven-member task force, created by the commission on Feb. 3, 2015, concluded after nine meetings that through 2035 the county will need 53 courtrooms to accommodate 53 judicial officers for the circuit civil, probate and county civil courts and the associated operations of the Administrative Office of the Courts and Clerk of Courts; appropriate jury assembly and grand jury space; law enforcement area; law library/community space; as well as security and building management functions.

Additionally, the task force recommended, the facility should be downtown near related courts, and as near as possible to a major transportation hub with adequate parking.

The deterioration of the Dade County Courthouse, built in 1925, has long been discussed, with some judicial leaders saying the building has system collapse and significant electrical and air quality issues. But in 2014, voters rejected a tax increase to fund a $390 million replacement.

After the election, Chief Judge Bertila Soto said she and others were asking elected leaders to find $25 million to repair deteriorating support columns.

Judge Soto set a priority of finding a new building even before problems with basement supports were uncovered.

Of that allocation, $11.8 million went to the Joseph Caleb Center Tower Renovation and another $30 million was set aside for emergency repairs to Dade County Courthouse. After paying for repairs at court facilities, the allocation is down to $46 million.

The task force said the main need is a larger facility with 50 courtrooms for the civil court. Secondary needs include those of the Richard E. Gerstein Criminal Courthouse, the jails (for which there’s a federal consent decree regarding overcrowding) and correctional facilities; the expansion/remodeling of branch courthouses, and the possibility of adding a West Dade branch courthouse.

The task force limited its work to the main facility. Members studied two alternatives: repair the existing courthouse and provide additional courtrooms in other locations, or build a new civil courthouse to satisfy projected 2035 courthouse needs.

Additionally, a one-member minority report recommends complete remodeling of the Dade County Courthouse, in which some renovations are already funded. In addition to the remodeling, the report says space could be added by renovating the 140 W Flagler Building.

Most task force members decided building a new courthouse would ultimately cost less over 30 years than the other choices.

The report compares those costs with a $361 million project budget including all capital costs for a new civil courthouse and $509,680,390 for the 30-year timeline of operating and capital costs.

Members requested that policymakers and staff seek opportunities to fund a new courthouse from existing revenues and seek financing options that complement various scenarios, such as selling the Dade County Courthouse at “as is” value with a county leaseback (estimated at $31,281,857) or selling “as is” with the county vacating (estimated at $21,561,857); an allocation of $46 million from the Building Better Communities General Obligation Bond Program to expand court facilities; adopt a new impact fee ordinance; and pass legislation that would urge the Florida Legislature to review the court filing fees structure for the county.

The task force recommends considering a public-private partnership for the project.

In coming months, a scope is to be outlined for the larger phase of the entire courts system master plan to include jail and correctional components.

Prior courts master plans – for 1986, 2002, 2007-2008 and the 2015 Civil Courthouse Master Plan draft – haven’t included the jails, so the scope is being reviewed with the Corrections and Rehabilitation Department and the Administrative Office of the Courts to begin early this year.

Internal Services Director Sara Smith discussed ongoing courthouse projects, 40-year certification and vacant and partially filled county buildings along with the pros and cons of their use and Dade County Courthouse operating/maintenance costs for five, ten and 15 years.

Mr. Marquez brought Robert Warren from the Regulatory and Economic Resources Department to detail the pros and cons of using a public/private partnership for courthouse infrastructure financing.

Other presenters were Eleventh Judicial Circuit Chief Judge Bertila Soto, Circuit Civil Administrative Judge Jennifer Bailey, who discussed the master plan and current/future needs of the courts and provided a tour; All Aboard Florida representatives and HOK architects for the new Children’s Courthouse, who discussed the standards and requirements used to approximate costs of a new civil courthouse; and Marv Hounjet, vice president of corporate development for the Plenary Group, who discussed public-private partnerships.