Advertisement
The Newspaper for the Future of Miami
Connect with us:
Front Page » Government » Miami acts on transit-oriented development 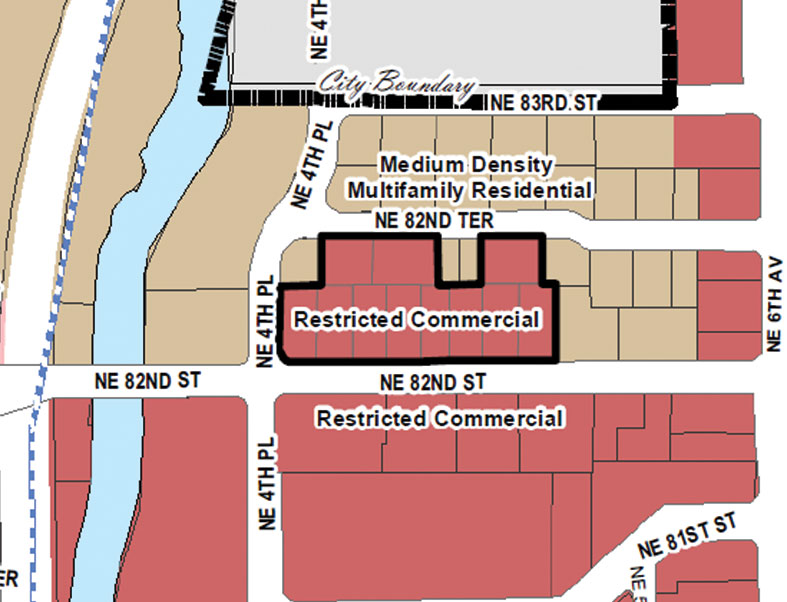 Miami commissioners have approved land use and zoning changes expected to bring new residential and commercial uses to the city’s northern reaches as part of a transit-oriented development.

The Upper East Side site fronts directly on Northeast 82nd Street, just west of Biscayne Boulevard, and is targeted for a mixed-use development that might one day feed a passenger rail line.

Attorney Ben Fernandez appeared before the commission on behalf of the applicants.

In a letter to the city, Mr. Fernandez said the proposed changes would allow the property to be developed in accordance with a plan prepared by Dean Lewis Architects entitled The Wave of Shorecrest.

Commissioners on Jan. 28 approved the second and final reading of two ordinances for the site: One changes the land use designation from Medium Density Multifamily Residential to Restricted Commercial, and the other rezones the land from Urban Center Transect Zone – Restricted to Urban Core Transect Zone – Open.

Included are eight parcels, about 2.3 acres or 98,932 square feet. The site is between Northeast 82nd Terrace to the north, Biscayne Boulevard to the east, Northeast Fourth Place to the west, and Northeast 82nd Street to the south.

The developer plans a mixed-use project compatible with the surrounding land uses, particularly the 79th Street Shopping Center to the south and the pattern of development along major corridors in that area.

Mr. Fernandez told commissioners Jan. 28 the project would “energize” an area long ignored, one “poised to be a transit corridor.”

The area has been identified as a potential future stop for Tri-Rail, Mr. Fernandez said.

A city analysis notes that the area consists of duplex and multifamily residences and the properties involved are near Biscayne Boulevard, an arterial road.

The proposal would enable the property owners to redevelop the site for retail, residential and office uses under the Restricted Commercial designation, which would allow up to 340 dwelling units on the site, though the developer plans to limit that number.

The applicant proposed this restrictive covenant:

•The property shall be developed consistent with the design intent of the plans entitled “Wave of Shorecrest 82nd Street Master Plan” dated July 15, 2015.

•The owners shall not increase the proposed floor area by pursuing a Public Benefits bonus under Miami 21.

•The property shall be developed with a maximum of 232 dwelling units.

The planning and zoning department and the city’s Planning, Zoning and Appeals Board recommended denial of the land use and zoning changes.

The planning department staff recommended denial because, in part, the changes would increase the intensity of commercial use in an area characterized by one- and two-story residential dwellings.

Mr. Fernandez had said the neighborhood is changing, noting the nearness to the residential area of Shorecrest, and said the developer had the support of the Shorecrest Homeowners Association.

The site is very close to the city’s boundary with the Village of Miami Shores. Mr. Fernandez said the zoning on the village’s southern edge has increased density and would allow mixed uses.

He also said the project is designed with no retail uses facing the Medium Density Multi-Family Residential properties across Northeast 82nd Terrace.