Advertisement
The Newspaper for the Future of Miami
Connect with us:
Front Page » Real Estate » 57-story luxury condo tower in Edgewater advances 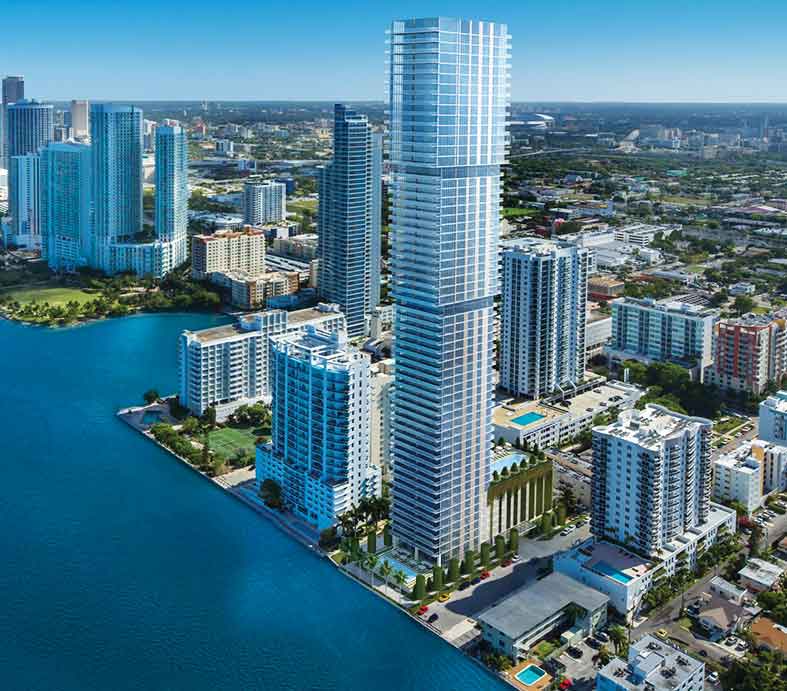 The plan to build a luxury condo tower on the waterfront in Edgewater is moving ahead.

Miami’s Urban Development Review Board has recommended approval of Elysee Miami, a 100-unit condo planned for a parcel at 700 NE 23rd St.

The unusual design of the 57-story tower, with the size of the floors growing larger as it rises, requires permission for lesser setbacks above the eighth floor. Permission was also needed to permit parking into the second floor and beyond.

The plan calls for providing about 229 parking spaces, 69 beyond the required number of 160, according to Iris Escarra, an attorney representing the developer.

The extra parking will allow the developer to sell two spaces per residential unit, she told the board.

Board members had asked the architects to address a staff comment about the project, that it was “disconnected to the pedestrian realm,” due in part to an elevated first floor and lobby.

Representatives of the developer said there were challenges on the narrow site and FEMA requirements to protect against potential flooding.

Designed by Miami architect Bernardo Fort-Brescia of Arquitectonica, the slender glass structure features a three-tiered telescoping shape with only two units per floor, providing direct unobstructed bay and city views from every unit.

Mr. Fort-Brescia said there is a small floor plate at the lower levels, graduating into slightly larger floor plates in the middle and very large on the top floors.

There is an advantage to the parcel as it is positioned between two streets, he said, allowing easier loading and traffic flow.

As for the higher lobby and ground floor area, Mr. Fort-Brescia said it is not a commercial building; there will be no retail or restaurant uses at the ground level that would invite a lot of foot traffic.

Board member Robin Bosco called it “a very interesting building.”

Mr. Bosco said he’d been reading news reports of other towers having serious issues with robotic parking systems and asked what was planned for Elysee.

The tower will have an automated garage that operates with a hard-wire conveyor system, the board was informed.

Board member Neil Hall said, “I see buildings going up that take advantage of the water, but transportation needs are not being addressed.” He voiced concern about increasing traffic.

“It’s simple. Straight-forward. I like the building,” said board member Jesus Permuy.

Two Roads said it expects to break ground on Elysee Miami by the second quarter of this year and finish in 2018.

Elysee is to include 100 luxury residences ranging from three- to five-bedroom units between 2,600 and 4,000 square feet. Preconstruction sales are under way, with prices from $1.65 million to more than $10 million.

“We are pleased that the project site can be cleared now and look forward to proceeding with construction in the months ahead,” Jim Harpel, senior partner and chairman of Two Roads Development, said in a prepared statement.

“This is a special waterfront property in one of Miami’s most desirable neighborhoods, and we believe Elysee’s prime location, price point and boutique design puts the project in an ideal position,” he said.

Residents at Elysee are to have access to two sky-high amenity decks. The seventh floor will include a 75-foot resort pool, an outdoor summer kitchen and barbecue terrace, fitness center and yoga studio, children’s room, men and women’s spa with sauna, steam shower and private massage rooms, and a blow dry bar.

Elysee’s 30th floor amenity level, which is designed to serve as an extension of each residence, will boast 360-degree bay and city views and include a great room, dining room with indoor and outdoor seating for up to 30 guests, chef’s kitchen, library and private theater, full bar and lounge, and wine room.

Two Roads Development is also building Biscayne Beach, a nearby 52-story residential tower under construction at 711 NE 29th St., which is slated to be done late this year. The 399-unit project is being developed in a joint venture with GTIS Partners, a real estate investment firm headquartered in New York.