Advertisement
The Newspaper for the Future of Miami
Connect with us:
Front Page » Profile » Mike Reininger: At the controls of new Brightline railway operations

Mike Reininger: At the controls of new Brightline railway operations 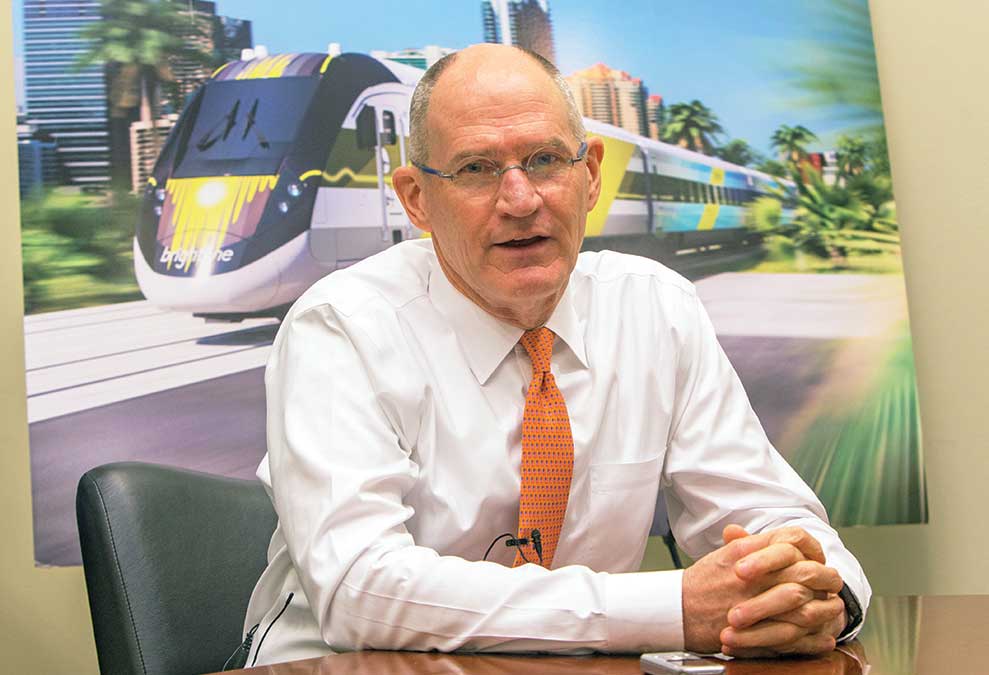 When Brightline launches in mid-2017, President Mike Reininger is confident the rail service from Miami to West Palm Beach will be successful and enthusiastically welcomed by travelers. For one thing, he and staff studied passenger rail systems of all types around the world and learned trains work as the preferred method for people to go back and forth between places with large population centers that have highly mobile activity between them.

Each year, Mr. Reininger said, about 500 million trips are taken between Miami, Fort Lauderdale, West Palm Beach and Orlando, where Brightline will eventually extend its service. About 95% of the trips are in private cars.

If there’s one thing Americans hate more than they love their car, he believes, it’s being stuck in unmanageable traffic. And that’s what happens, particularly in Southeast Florida among the most congested road systems anywhere.

Eventually, Mr. Reininger said, people love their cars less and less because the vehicles are no longer a comfortable and reliable means of transportation. That’s when one starts looking at alternative modes, he said.

A privately-funded venture, Brightline expects to make a profit through ticket sales, ancillary revenue and partnerships. The trains have been ordered and are under construction at the Siemens facility in Sacramento, CA.

All Aboard Florida is really two businesses, Mr. Reininger said. One is Brightline, the transportation and train business, but the company is also heavily engaged in transit-oriented urban real estate development.

In the past, Mr. Reininger has been executive vice president and chief development officer of AECOM Technology Corp., senior vice president of creative services and corporate marketing for the St. Joe Co. and managing partner of Union Station Neighborhood Co.

5 Responses to Mike Reininger: At the controls of new Brightline railway operations