Advertisement
The Newspaper for the Future of Miami
Connect with us:
Front Page » Communities » Float like a butterfly, sting like a parking lot 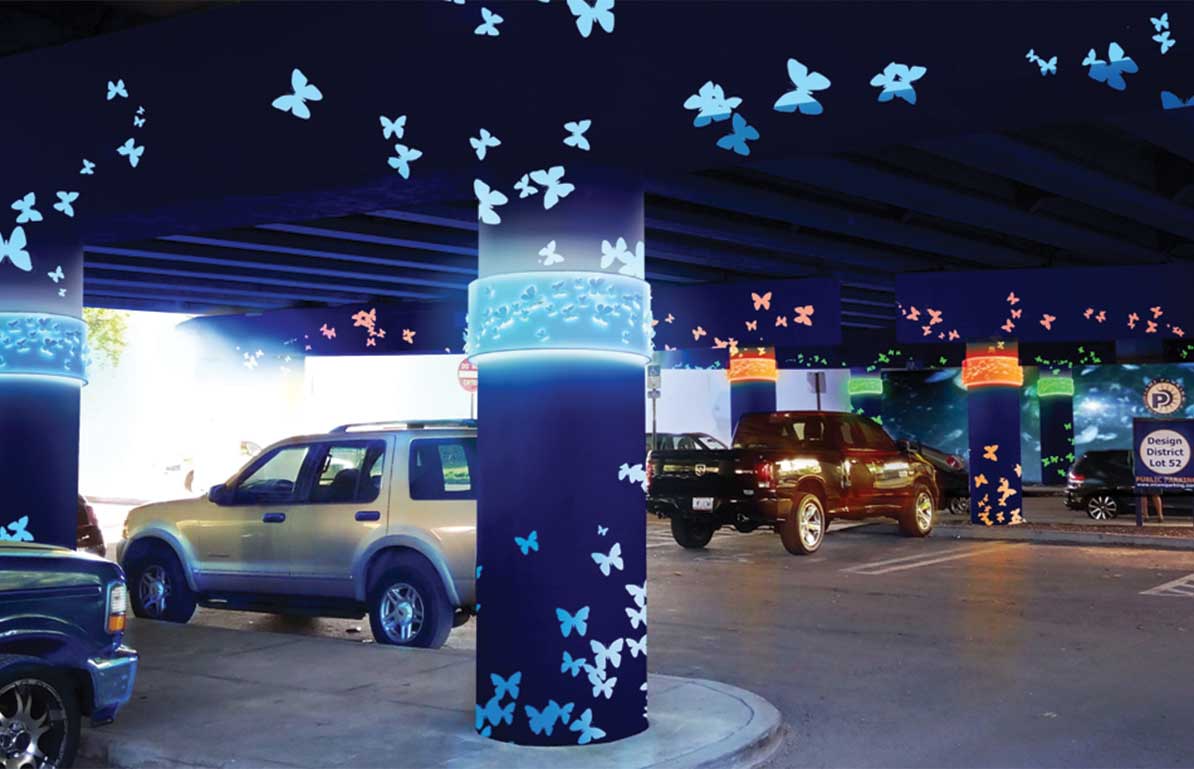 It’s a challenge to spruce up an otherwise bland concrete parking lot.

So the Miami Parking Authority turned to the creative designers at DiBari & Associates to basically reinvent the municipal parking lot.

The city’s parking agency is considering several designs in the planned remake of three parking lots abutting the booming Design District, and near Midtown.

Each lot has the distinction of having Interstate-195 overhead.

Authority CEO Art Noriega presented a slide show to members of the Off-Street Parking Board showing what the lots could look like with a little imagination, paint and lighting.

“Those lots, under the interstate, are kind of an eyesore,” said Mr. Noriega.

The idea is to reinvest in the lots, making them more accessible, safer and friendlier.

The highway overpass presents a natural barrier, but with some fresh ideas the parking areas can be made friendly for cars and pedestrians, he said. Remaking these lots can make them a more inviting pathway from street to the Design District.

A review committee sat down and evaluated about two dozen ideas for the parking lots, he said.

Many of the concepts were innovative and some “stretch boundaries,” Mr. Noriega said.

The committee narrowed the ideas down to five:

•The Butterfly Effect would employ wraparound LED lighting on the concrete support columns, beams and walls, and up-lit stencils of butterflies in shades of blue. Images or patterns could be projected on the walls and other surfaces.

•Bubbly uses groups of blue circles in neon light, and processed backlit glass, creating a water effect. DiBari & Associates said they’d make the string lighting “as vandal-proof as we can make it,” said Mr. Noriega. The state-of-the art LED light strings are very durable and have a long life span, he said.

•Silhouettes is a Tron-like linear pattern in flexible neon lights, glowing on columns, beams, the ceiling and walls (like the classic video game), and includes the Miami skyline.

•“Parking” takes the practical use of the space and blasts it with very bright lights and colors, and uses quotes from famous people. The artsy treatment would have the words backlit on panels.

•Mile Marker Zero incorporates today’s hand-held mobile devices to access and use the space, to chart a course for discovering what the Design District has to offer, and allows social interaction. A motorist could use a smartphone to pay for parking, then fire up a new app to check out shops and restaurants in the neighborhood. This design marks the lots as Zero Mile, with lighted signage pointing one way to the Design District and the other way to neighboring Midtown.

The Mile Marker Zero concept might also display a video loop showing area attractions and the images of famous people. One added idea is to display a blank human silhouette and have periodic contests for people to campaign for the title of District Ambassador, and get their photo on the walls.

Board Chair Thomas Jelke asked who would maintain the mobile application.

“We would. It would be our responsibility,” said Mr. Noriega.

Would the stores – the stakeholders – in the Design District help by subsiding costs to create and maintain the app, asked Mr. Jelke.

Board member Marlon Hill said the agency has many parking lots throughout the city located under an overpass. He asked if this lot improvement plan is site specific.

Mr. Noriega said yes, it is, for two reasons: the three lots abut a unique area, and the improvements require the approval of the Florida Department of Transportation.

Mr. Hill said he’d like to see the program expanded to improve all lots under overpasses.

“Every community wants to be upscale,” said Mr. Hill. “Every lot should be welcoming and aesthetically pleasing.”

Mr. Hill went on to say many parking lots become havens for the homeless, and he wondered how the authority would handle that after upgrading the lots.

“There’s no homeless problem here – none,” Mr. Noriega said of the three lots next to the Design District.

Downtown surface lots do attract the homeless, especially at night when they become empty after 5 p.m., he said. “It’s an ongoing struggle.”

The lots abutting the Design District are very busy at night and on the weekends, and “the homeless can’t migrate in,” Mr. Noriega said.

Mr. Hill requested that Mr. Noriega and staff work on a presentation for February showing “the state of all [lots under] overpasses.”

No decisions have been made on which themes to use in which lots.