Advertisement
The Newspaper for the Future of Miami
Connect with us:
Front Page » Top Stories » David Beckham soccer stadium talks haven’t kicked in 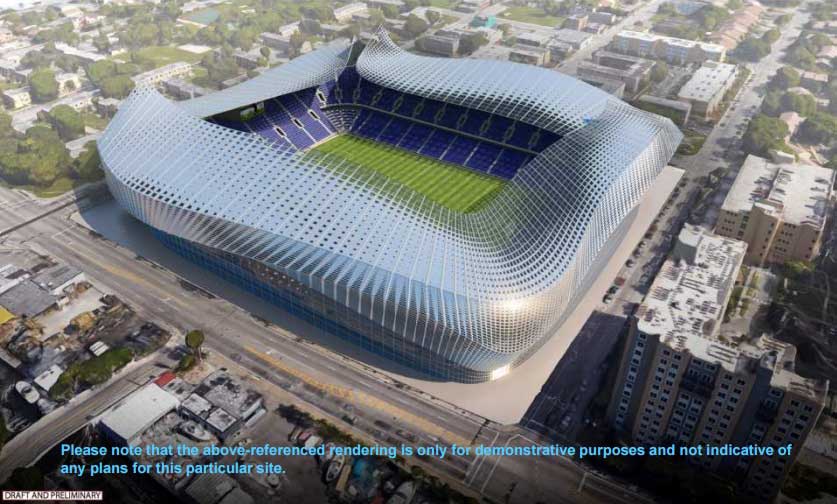 While Miami Beckham United has shifted from seeking a soccer stadium on port land or near Marlins Park and intends instead to negotiate to buy county-owned land near downtown currently managed by the Water and Sewer Department at fair market value, subject to approval of the county commission, formal negotiations haven’t yet started, Mayor Carlos Gimenez said Tuesday.

In early December, Mayor Gimenez signed a non-binding letter of intent with international soccer star David Beckham and his partners, confirming their intention to discuss purchasing property on Northwest Sixth Street and Sixth Avenue as part of the group’s effort to assemble enough land to eventually construct a privately financed and owned Major League Soccer stadium in Miami’s urban core.

Mr. Gimenez said Miami Beckham United would be responsible for paying property taxes annually, just like any other private entity in the county.

On Tuesday, the mayor told Miami Today the state allows governmental entities to sell their property at market value without going to bid if there’s an economic value to the community.

Currently, he said, Miami Beckham United is doing due diligence with privately-held properties and isn’t yet ready to formally negotiate with the county for its property.

However, he said, the county is ready with an appraisal for the land when Beckham United formally asks to negotiate the purchase and will have a report on the economic value the transaction would represent.

In a Dec. 4 statement, Mr. Gimenez said the transaction would be subject to the State Economic Development Statute and create a specific number of jobs for Miami-Dade residents during the construction process and permanent positions once work is completed.

“Although it has been nearly two years since David Beckham and his partners announced that their Major League franchise would be located in Miami, there have been well-documented challenges to securing a viable location for a stadium,” Mr. Gimenez wrote. “The signing of this non-binding letter of intent may be the most significant step in our collective efforts to make Major League Soccer a reality in Miami-Dade County.”