Advertisement
The Newspaper for the Future of Miami
Connect with us:
Front Page » Government » Navigation district lectures state on Miami Circle neglect 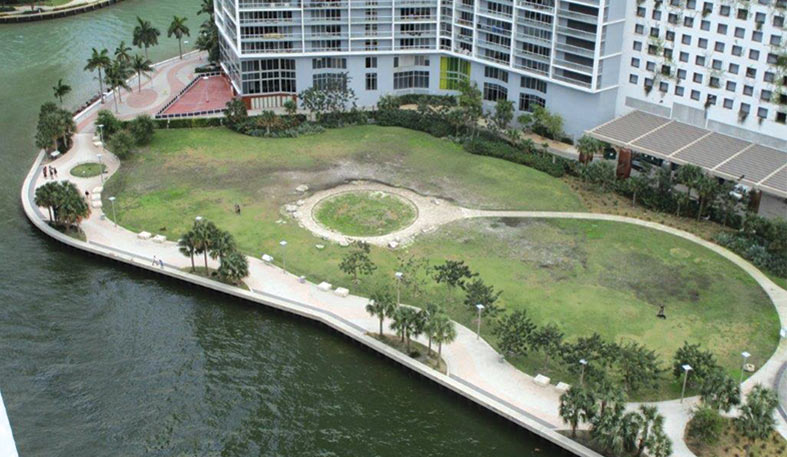 The Florida Inland Navigation District is taking the Florida Department of State to task for ignoring its obligation to maintain the Miami Circle.

Grievances were aired Monday at a Miami River Commission meeting about the condition of the historic site at the mouth of the river, on the edge of Brickell.

The site is home to a 2,000-year-old Native American circular artifact, uncovered in 1998 during a routine pre-construction survey, later designated a National Historic Landmark and now reburied.

The navigation district allocated more than a half-million dollars to shoreline stabilization at the Miami Circle as part of an agreement with the state department to take care of the sensitive area.

After years of neglect, the navigation district is demanding the state meet its obligations or risk an action to recover the hefty grant.

Mr. Crowley is an attorney who represents Miami-Dade County on the board of the navigation district, a group that helps fund waterfront improvement projects.

“We worked very hard to get that site up and running, as part of the riverwalk,” Mr. Crowley reminded the river commission.

But the Miami Circle has suffered from inattention and is in “really bad shape,” he said.

From loads of trash accumulating to illegal parking and a general lack of maintenance, he said, the Miami Circle is in trouble.

“The site is generally in a bad state of affairs… it’s a really sad situation,” Mr. Crowley said.

Among the department’s responsibilities under the agreement – and required by rules of the grant – is to maintain the project “in accordance with the standards and maintenance for other local facilities and in accordance with applicable health standards” and to keep the project “reasonably safe and in reasonable repair to prevent undue deterioration and to encourage public use.”

Mr. Crowley reported to the river commission: “Unfortunately, the state is not living up to its obligations.”

The navigation district board has discussed the situation at length, and in a Dec. 11 letter to Secretary of State Ken Detzner, the board’s chairman asks that the state address the problems.

Mr. Crowley shared the letter with river commission, along with attached photos showing the site’s condition.

“In spite of numerous written and e-mail communications to the Department describing the deteriorating conditions and lack of maintenance of the Project, from both [the navigation district’s] Miami-Dade County Commissioner and from the Managing Director of the Miami River Commission, the Department has failed to correct the situation,” wrote Board Chair J. Carl Blow.

Before the navigation district, or FIND, moves to get back its grant money, the chair asked the secretary to intervene, the letter says.

“If this problem is not resolved, FIND may be forced to invoke the refund provisions in the Agreement. FIND considers this a last resort and we are hopeful that your intervention will make this drastic step unnecessary,” Mr. Blow wrote.

Regarding the navigation district calling back its money, Mr. Crowley said, “We hope that doesn’t happen but we’ve had no response, and I’m not optimistic it will be resolved quickly or amicably.”

Mr. Crowley said a resolution from the river commission urging the state to meet its obligations might help.

Some disagreed on the approach the river commission should take in urging the state to care for the site.

Commission member Patricia Harris, saying the Miami Circle is popular with the public, suggested a “shame on you” campaign directed at the state.

Frank Carollo, a Miami city commissioner and river commission member, said he preferred to take the cooperative route, to try and work with the department of state on the problem.

“It seems as though we’ve already done that,” said Ms. Harris.

Mr. Crowley detailed efforts by River Commission Managing Director Brett Bibeau and a band of volunteers who twice a week clean up debris and attend to the site. The commission has spent some of its funds for the trash removal.

The river commission was also informed of observations by a Native American who visits the site weekly and reported dead and worn grass, homeless camps, an increase in trash and feces, illegal parking, and signs that the land itself may be sinking, as evidenced by berms that are now depressions, elevated sidewalks and exposed underground pipes.

In the end, the commission agreed to draft a resolution detailing its costs to maintain the site and urging the state to assess the Miami Circle’s condition and, consistent with its agreement with navigation district, to maintain the property.