Advertisement
The Newspaper for the Future of Miami
Connect with us:
Front Page » Top Stories » David Beckham’s soccer stadium gets river commission voice 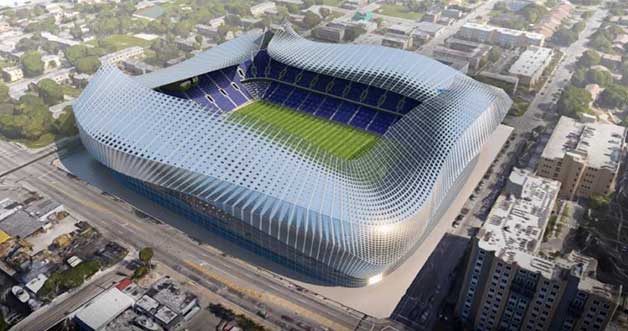 As David Beckham’s group works to get land in Overtown for a Major League Soccer stadium, the Miami River Commission wants a voice in decisions.

The 650 NW Eighth St. site Mr. Beckham’s group seeks is within the Miami River Corridor, about two blocks north of the river and one block east of Seybold Canal. The site in Overtown is adjacent to the Spring Garden Historic District.

The plan calls for buying about 10 acres of private and county-owned land for a privately-financed, 25,000-seat stadium.

At the request of member Ernie Martin, the river commission added the stadium plan to its agenda Monday. Dr. Martin is a member of the Spring Garden Civic Association.

The commission agreed it wants to be labeled a stakeholder in the evolution of the stadium and will communicate that to Miami Beckham United and city government.

At a December meeting held by Mr. Beckham’s group, representatives promised that once a solid plan is prepared, stakeholders will be invited to comment.

“I believe we should be one of those stakeholders,” said Dr. Martin.

At the community meeting, Spring Garden homeowners expressed concerns about the impact of the stadium on their neighborhood. A major worry is an influx of people and cars into the single-family area.

Traffic and other concerns were raised Monday, including lack of parking and soccer relying on alternatives to parking, including use of river water taxis to get fans in and out.

Supporters of a MLS team returning to Miami mention the long tradition of fans “marching to the match,” Dr. Martin noted.

The site Miami Beckham United targets will need land use and zoning changes, he said, and “will have to pass through the review process of the City of Miami.”

That process is expected to include review by Miami’s Planning, Zoning and Appeals Board, the Urban Development Review Board and ultimately the City Commission, he said.

“I ask that we indicate we want to be a stakeholder at the table,” Dr. Martin said.

He wants the river commission to weigh in on topics related to the stadium, including water taxis and the need for taxi landings, a potential parking waiver request, and the impact the stadium could have on abutting neighborhoods.

“The river corridor can encompass this,” said Commission Vice Chair Jay Carmichael regarding the stadium. “It impacts the river as a destination, and we do want the river to be a destination.”

County Commissioner Bruno Barreiro said he was invited to the Dec. 17 community meeting.

“I have serious concerns,” he said Monday. “There are a lot of questions unanswered.”

Those questions concern parking needs, the size of the structure, how people will get to and from the site, how much of a role mass transit will play, how the development will impact neighboring communities and more, said Mr. Barreiro.

“There are a lot of basic questions that need answers,” said Ms. Harris: “Ingress and egress. Noise. Lighting. Hours of operation.”