Advertisement
The Newspaper for the Future of Miami
Connect with us:
Front Page » Top Stories » Entrepreneurs join the Drones Club 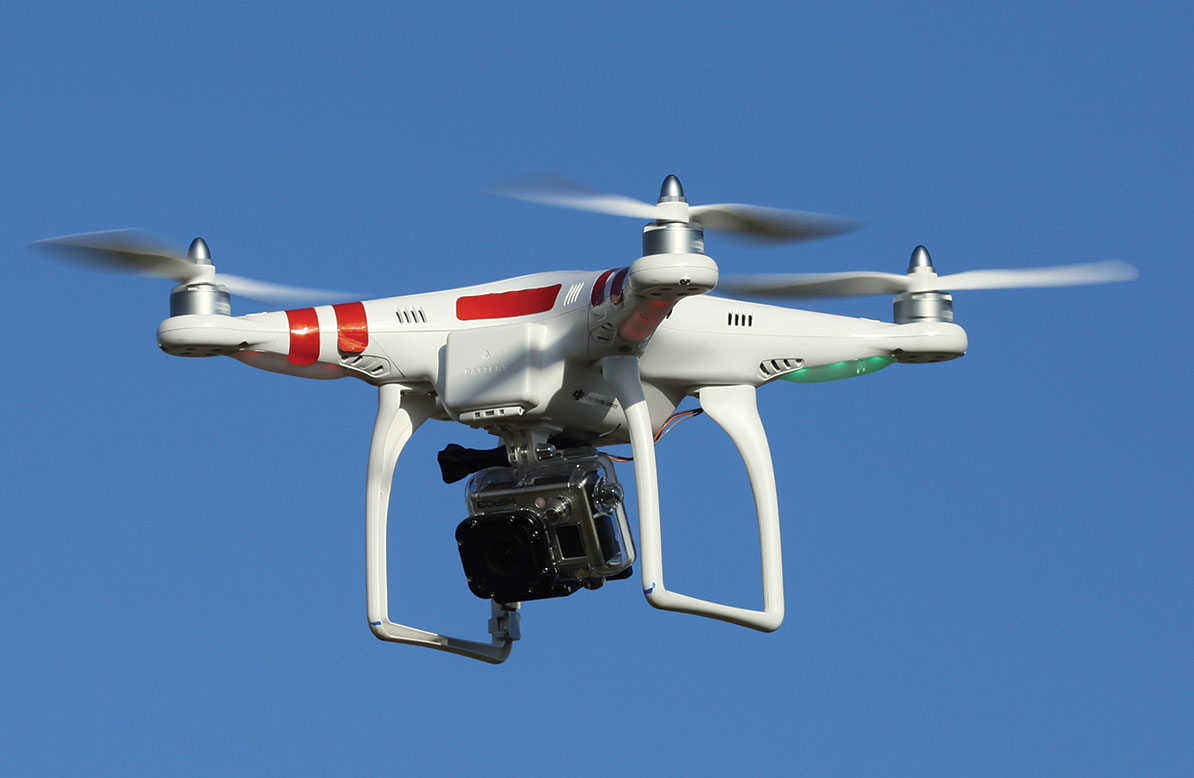 Hovering quietly overhead of hundreds assembled for the Beacon Council’s 30th Anniversary celebration in October was a drone equipped with a camera.

It was technology being employed to capture a large and awesome group photo and video.

A regular photographer was at work, but most of the attention was on the flying whirligig making the rounds of the cavernous banquet room.

Drones, also known as unmanned aircraft systems or UAS, have exploded in popularity.

The reduction in cost has led to many more people having access to these small unmanned flying machines.

They are being used by hobbyists but also have been commandeered by filmmakers, marketing professionals, security firms, realtors and photographers to explore our world from above.

The boom in popularity and the numbers anticipated as Christmas gifts this season motivated local, state and federal officials to quickly cobble together rules and regulations.

From the City of Miami to Pittsburgh and last week the Federal Aviation Administration, authorities are trying to get ahead of this fast-moving technology.

The FAA announced it will require most drones to be registered, beginning this week.

On the cover of the Miami River 2016 Calendar is a sweeping panoramic image of the city hugging the river, taken from high above the urban scene.

The impressive photo was taken by Pietro Taballione.

Mr. Taballione didn’t take the photo from an airplane or a helicopter, and he wasn’t perched on the balcony of a high-rise.

He was on the ground at the controls of a drone fitted with a top-quality camera.

Mr. Taballione is in the process of launching a business called DISCHOVER Aerial Reconnaissance.

He plans to specialize in aerial reconnaissance, videography and surveying, using drones and high-resolution cameras for a wide variety of services, from assistance with engineering, environmental projects, construction and more.

Mr. Taballione is a senior environmental scientist with more than a decade in environmental, engineering and real estate. He has provided transportation engineering services on projects in South Florida for many years.

Donating the photo for the cover of the river calendar to the Miami River Commission recently was a natural for Mr. Taballione. Many years ago he worked an internship with the river commission.

“I know the good work the commission’s done in the past 10 years and I wanted to contribute to that,” he said.

“Drones have been around awhile but they weren’t very affordable or user friendly,” Mr. Taballione said.

Advances in the technology have made them smaller yet easier to maneuver, he said.

The relative affordability of drones has fueled the boom in popularity, he said, and today there are drones so user friendly it “allows you to fly it straight out of the box.”

The improvements in drone usage and stability have led to countless new uses.

Mr. Taballione said drones are extremely useful in environmental work. Poorly accessible areas are no longer off limits, he noted.

“Those high-res cameras provide a tremendous tool for aerial recognition of trees, vegetation and wildlife,” he said.

In his work as an environmental scientist, he’s examined and surveyed many areas of seagrass.

Drones can also be a very good tool to track progress on any type of construction project, he said. “You can access areas usually very dangerous for the crew. In an affordable and quick manner you can check structures that otherwise you could only review with specialized equipment.”

In the environmental field he plans to provide habitat characterization, vegetation analysis, surveying of seagrass, trees and wildlife, 3D mapping and more.

The uses of drones these days seem endless and more and more, drones are playing a major role in the real estate market.

This was noted by newly-elected Miami City Commissioner Ken Russell when the commission debated drone regulations this month.

Some experienced drone operators are able to make a real estate listing “look like it was filmed by George Lucas,” said Mr. Russell.

The commissioner said he supports regulating drones, saying the public’s safety is of paramount concern and he understands the timing of the legislation.

Commissioners wanted rules before the end of the year, with a keen eye on the city’s New Year’s Eve celebration in Bayfront Park, which will be televised live to the nation.

The legislation’s sponsor, Commissioner Frank Carollo, feared new drones fresh from under the Christmas tree being flown over the masses gathered at the waterfront venue and causing potential harm.

Mr. Russell mentioned “a good side” for drone usage, saying the small unmanned devices are being flown for an amazing array of uses.

He said he reached out to drone operators and found many who supported some regulation to control a few “bad apples” spoiling a good thing for others.

In bringing the legislation, Mr. Carollo pointed out that Miami, with its warm and usually welcoming weather year around, has a host of popular outdoor events that attract thousands of participants. Those include the annual Calle Ocho Festival, Miami International Book Fair, satellite events associated with Art Basel, the New Year’s Eve show and more.

The ordinance – adopted unanimously Dec. 10 – notes that declining cost has made drones increasingly popular and available to citizens and hobbyists, and that they can be equipped with high-definition cameras, night-vision cameras and infrared scopes, “as well as with combustive or explosive composites and materials.”

For its part, the FAA announced what it’s calling “a streamlined and user-friendly web-based aircraft registration” for owners of drones, or small unmanned aircraft (UAS), weighing more than 0.55 pounds (250 grams) and less than 55 pounds (about 25 kilograms) including payloads such as on-board cameras.

Registration is a statutory requirement that applies to all aircraft. Under this rule, any owner of a small UAS who has previously operated an unmanned aircraft exclusively as a model aircraft prior to Dec. 21 must register no later than Feb. 19, 2016.

Owners of any other UAS purchased for use as a model aircraft after Dec. 21 must register before the first flight outdoors.