Advertisement
The Newspaper for the Future of Miami
Connect with us:
Front Page » Communities » New look for Grove waterfront 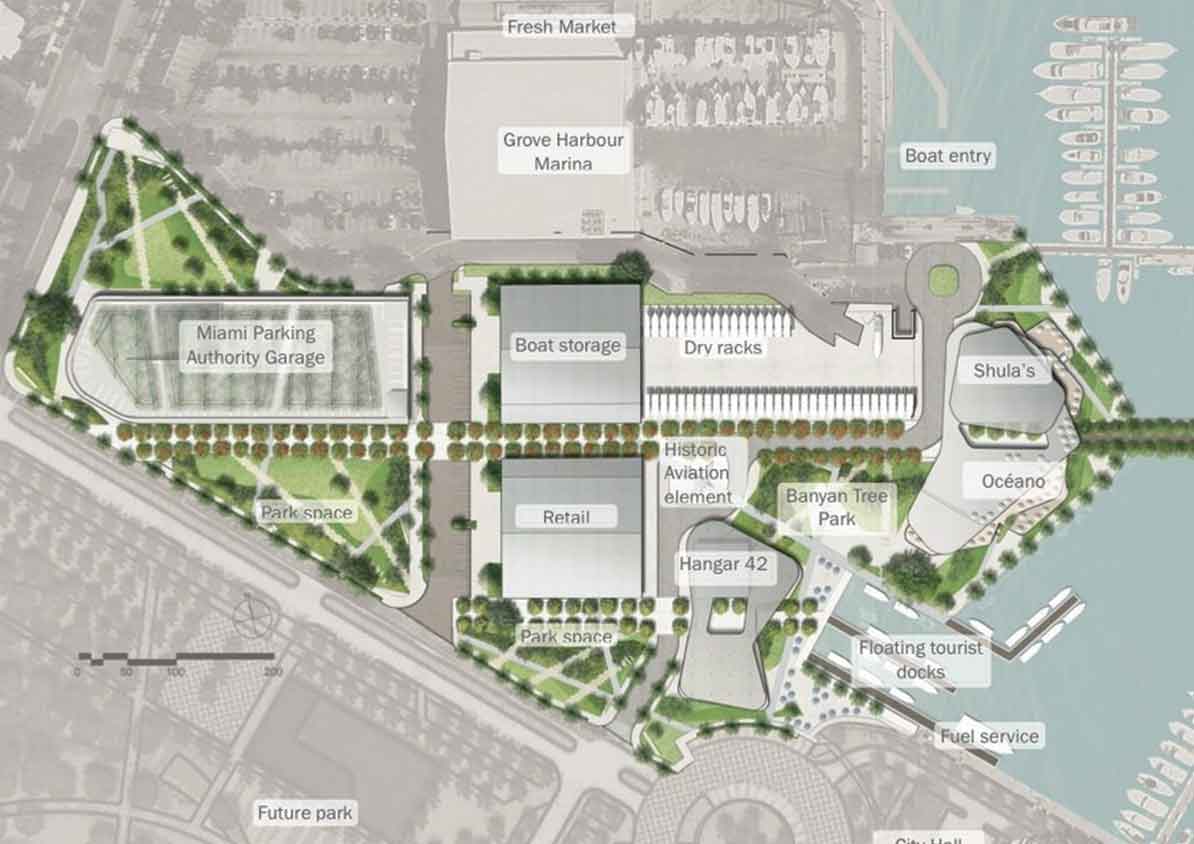 Miami officials are moving ahead with contracts to begin a major rebuilding of the Coconut Grove waterfront that will add a parking garage hugged by retail shops.

They approved an agreement between the city and the Miami Parking Authority; a parking facilities agreement between the city, parking authority and Grove Bay Investment Group LLC assigning the obligation to construct and operate a garage at 3385 Pan American Drive and 51 Charthouse Drive; and an access easement and indemnification agreement among the city, Grove Bay Investment, and Grove Harbour Marina and Caribbean Marketplace LLC allowing for improvement and re-alignment of Charthouse Drive.

The parking authority had approved the contracts in October.

The proposal to redevelop the city-owned waterfront north and east of City Hall includes two formal restaurants, Shula’s and Oceana, and a causal restaurant, Pub & Grub, in addition to waterfront retail and the garage.

In the summer of 2013, the city commission agreed to lease about 7 waterfront acres to Grove Bay Investment Group LLC for $1.8 million a year upon completion, and about $17.9 million of privately-funded improvements to redevelop a marina, construct restaurants, improve the public baywalk, fund part of the garage and make other improvements.

City voters approved the plan in November 2013, but litigation stalled work on the project for two years.

The plan is to remake the waterfront in an area that for years was home to Scotty’s Landing and the Chart House restaurants.

Commissioners approved the contracts but Commissioner Frank Carollo had several questions regarding the garage.

The Grove Bay Parking Garage is planned to rise north of City Hall on Pan American Drive. It had been designed with two levels, with ground floor retail, providing enough area to accommodate about 228 vehicles. The garage is now being redesigned with a third level, bringing total parking spaces to about 333, according to the parking authority.

Mr. Carollo asked who will pay for the garage.

Grove Bay Investment Group is contributing $4 million toward its total price tag of about $8 million, the parking authority says.

Rolando Tapanes, authority director of planning and development, said funds needed to build the garage are in the parking agency’s budget.

This year’s sale by the authority of its Oak Avenue garage in the Grove for $16 million will help offset costs associated with the Grove Bay garage, Mr. Tapanes told the commission.

Mr. Carollo wanted to know where the remaining revenue from the Oak Avenue garage sale would be spent.

Mr. Tapanes said some of the money was returned to the Coconut Grove Business Improvement District in return for a contribution the district made to get the Oak Avenue garage built. The rest has been earmarked for projects in the Grove, said Mr. Tapanes.

In November, the parking board instructed authority CEO Art Noriega to use the sale proceeds for these parking projects:

The resolution came at the request of Mr. Noriega to back up his promise that every penny gained from the sale of the Oak Avenue Garage will be spent on new projects in the Grove.

The parking agency is hoping to break ground on the Grove Bay Parking Garage in June or July.

Part of the lease agreement between the city and developer calls for the parking authority to build the garage, replace existing parking spaces that had served the Dinner Key Auditorium (old expo center) and “provide convenient parking for the patrons of the existing and proposed development contemplated by the lease.”

The authority will build and manage the garage and share no parking revenue with other parties.

The authority will also be creating about 80 parking spaces for city marina users.

The site plan for the reworked waterfront reconfigures Charthouse Drive, which currently extends off of South Bayshore Drive between two hangars and ends at the water. The plan shows that area rebuilt as part of off-street parking and an open area that leads to the water.

The easement approved Nov. 19 notes that Grove Bay has proposed making improvements to Charthouse Drive, which include a change to its alignment to conform to the plans it submitted to the city.

The legislation says the city will derive substantial benefits from the development and operation of the improvements contemplated by the Grove Bay lease.