Advertisement
The Newspaper for the Future of Miami
Connect with us:
Front Page » Government » Authority lease to add parking after challenge 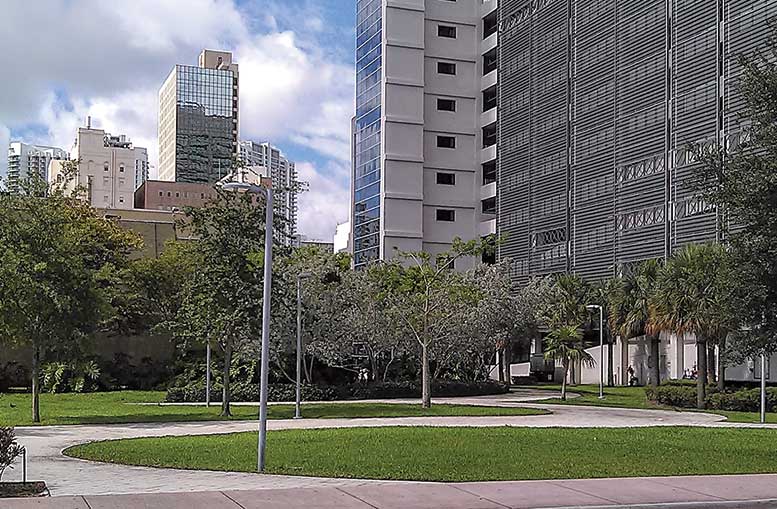 A new public-private partnership between the city’s parking agency and a development firm is expected to bring residential and retail development to Downtown Miami, along with extra public parking.

The Off-Street Parking Board on Nov. 4 approved a ground lease between the Miami Parking Authority and Grand Station Partners LLC for vacant land next to its flagship parking garage.

The land is owned by the authority and is adjacent to its Courthouse Center Garage at 40 NW Third St.

Referred to as Parcel B by the authority – not to be confused with the county’s Parcel B on the waterfront – the undeveloped site is home to grass, sidewalks and small trees and has an address of 240 N Miami Ave.

The parking board on May 6 authorized authority CEO Art Noriega to negotiate with Grand Station Partners for redevelopment of Parcel B.

The company’s proposal includes a new 8-story parking facility for more than 350 vehicles, and a 33-story tower identified as multi-family with about 258 apartments. Retail space would also be part of the project, according to the proposal.

The lease is for 99 years, with one 50-year option to extend. The lease begins when both parties sign it.

Base rent will begin at $240,000 a year, but won’t kick in for six years. Base rent commences the first day of the sixth year following receipt of a certificate of occupancy, according to the lease.

Every five years after the rent commencement date, base rent will increase 10% for the duration of the lease.

The lease spells out the main gain for the parking agency: an approximately six-level expansion of the existing parking garage, providing an additional 355 spaces.

“Landlord will retain all ownership and operational rights to the Parking Facility, free and clear of any and all liens and/or encumbrances whatsoever,” the lease reads.

Construction must begin within 20 months of the start of the lease.

After 11 years, Grand Station Partners will get the option to purchase Parcel B, except for the garage.

As an addendum to the lease, staff prepared a sheet showing facts that influenced the terms, including projected additional revenue from the added parking. For example, the additional parking revenue in year one after the new spaces are available is projected at $737,676.

The board vote was not unanimous. Stephen Nostrand voted no, after an attorney for a competing developer claimed the move to approve the lease would be illegal.

Mr. Fischman alleged noncompliance with the way the parking agency was handling the matter, including errors in publishing the request for proposals.

He said any further action on the property would be “illegal” without a republication.

“Standards for all were not equal,” Mr. Fischman said, asking the board to not approve the lease.

North Miami Ave Realty LLC and its affiliate Mana Miami own the southeastern corner of the block that is home to Courthouse Center Garage and Parcel B.

Robert Burlington, an attorney representing Grand Station Partners, said much work went into crafting the lease and every “i” is dotted, every “t” is crossed.

“There are no improprieties,” he told the board, saying the lease is “properly before you for approval today.”

Mr. Burlington also pointed out that the time for competing parties to appeal was back in early May, when the board authorized Mr. Noriega to begin negotiations with his client.

Mr. Mana’s representatives did not appeal, said Mr. Burlington. Authority staff confirmed this to the board.

Board member Jami Reyes told Mr. Fischman, “It’s interesting you come in at the last minute when you had all this time to reach out to us.”

Back in May, Mr. Noriega told the board he would work to bring both parties to the table: Grand Station Partners and North Miami Ave Realty LLC-Mana Miami.

He said then it was his hope “to bring all parties to the table… and include the other parcel… In the grand scheme of things it would be better to include that piece.”

Mr. Noriega made in clear on the record that he would initially try to negotiate with both parties, in the hope of coming to an agreement that would redevelop the entire eastern section of that block along North Miami Avenue.

But Mr. Noriega stressed that if a collective agreement couldn’t be worked out, he would proceed with a two-party contract between the authority and Grand Station Partners.

And that is what occurred.

“To be frank, it’s been absolutely frustrating,” Mr. Noriega told the board last week, describing what he said were numerous attempts to get Mr. Mana to focus on the matter and sit down for a discussion.

“I get it,” Mr. Noriega said, Mr. Mana is involved in a lot of projects in other areas of the city, but “that doesn’t mean we have to be in a holding pattern.”

Mr. Noriega said he put a lot of effort into making the project work for all parties.

“I stand by the recommendation wholeheartedly,” Mr. Noriega said of the lease with Grand Station Partners.

Opened in 2010, Courthouse Center Garage is a multi-level structure with upper and lower office space and some retail space on the ground floor. The largest office user in the building is the parking agency itself, which takes up about 10,000 square feet on the top floor. A law firm also has part of the 11th floor, adjacent to the authority offices.

2 Responses to Authority lease to add parking after challenge