Advertisement
The Newspaper for the Future of Miami
Connect with us:
Front Page » Communities » Twin 93-story towers shrink to one at 31 stories

Twin 93-story towers shrink to one at 31 stories 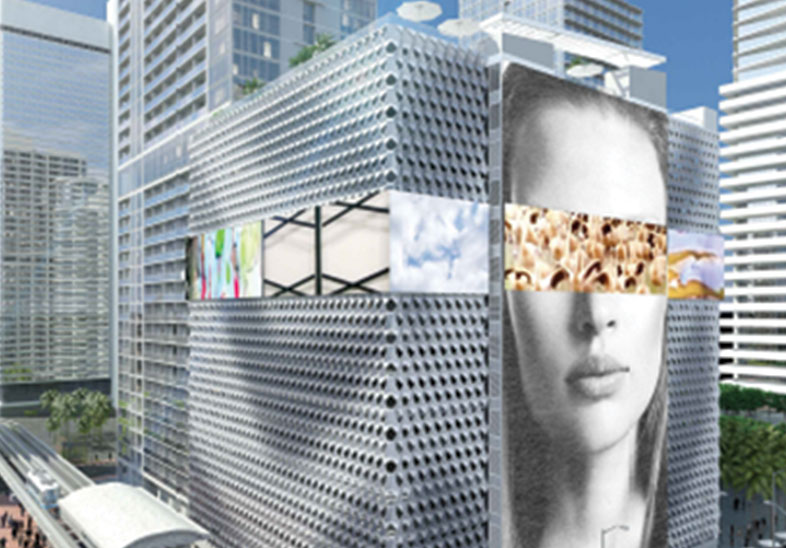 A downtown site in Miami chosen for a pair of 93-story towers will now become home to a far shorter development.

Phase one is to be a condo tower called Vice, at 243 NE Third St., from developer Property Markets Group, or PMG.

The city’s Urban Development Review Board recently recommended approval of the Vice project, with comments.

New site plans and renderings show the proposed development for what had become known as the Empire World Towers site is vastly different.

Another development group had gained approval of a Major Use Special Permit, or MUSP, for Empire World Towers several years ago that allowed for two connected towers each at 93 stories, to become home to more than 1,557 residential units.

The new plan from PMG breaks up development into two phases, according to attorney Javier F. Aviñó, representing the developer.

The new plan comprises a minor modification to the MUSP, he told the review board.

Phase one involves Vice, a 31-story tower with about 464 residences, 7,000 square feet of ground floor retail and a 15-story garage with room for about 670 cars.

Phase one incorporates creation of a pedestrian passageway from Northeast Third to Fourth streets. The plan is designed to activate the street area, said architect Sandy Peaceman.

Vice is to be built adjacent to a Metromover station and is near Miami Dade College’s downtown campus.

Vice will have an amenity deck with a pool and a bike storage area, said Mr. Peaceman. The project also calls for a dog park.

The parking facility is designed with a metal mesh façade – a skin like a giant cheese grater and similar to a new garage completed this year in the Design District. The difference is the towering art element on one end of the garage – the image of a human face from artist Javier Martin.

A band or ribbon of colorful material covers the eyes on the big face and wraps around the building, in renderings shown the review board.

Mr. Perez did suggest more retail uses, noting the potential activity with the pedestrian passageway and the Metromover.

“I’m overwhelmed by the parking garage,” he said.

Mr. Hall voiced concerns about the image of the face, wondering if it would be perceived as an art piece or an advertising billboard. “The garage is a very powerful form,” he said.

In regard to the reference of a billboard, Mr. Aviñó said, “That’s not our intent at all.”

Mr. Hall asked if the residences would include affordable one-bedroom units.

Mr. Peaceman said the units will be smaller and priced toward the “high end.” The building is to include 110 one-bedroom units, some with a den.

Mr. Hall asked who the developers are trying to attract. Mr. Peaceman said they’re those young professionals more apt to use public transportation.

“I’m not sure they can afford this,” Mr. Hall responded.

Board member Willy Bermello was critical of mechanical elements being placed in or near the pedestrian passageway, including the electric vault, generators, a diesel tank and other items.

Mr. Bermello agreed with Mr. Perez about needing more retail and said there ought to be more revenue-producing space near the passageway.

Board chairman Robert Behar said he had many concerns about the project, including that the area of the proposed dog park will never get sunlight. He also complained that plans and renderings didn’t show existing neighboring structures and that the face image would be partially blocked from view.

Mr. Behar also questioned the size of the garage, and said he considered the changes to the original MUSP to be substantial and not minor.

Mr. Peaceman said designers went through 10 iterations of the garage, and “cost-wise” the plan presented is the best.

In relation to the garage, Mr. Bermello said, “You’re creating your own albatross.”

“On the positive [side], we’re not getting a 93-story building anymore,” said Mr. Behar.

The motion to recommend approval of phase one incorporated several board comments, including that the developer consider additional smaller art pieces, relocate the mechanical components including the electrical vault, and study increasing the height of the first-floor retail.

Phase two will be developed under a separate warrant, Mr. Aviñó said. It involves the eastern portion of the site with frontage of Biscayne Boulevard, across from Bayfront Park and Bayside Marketplace.