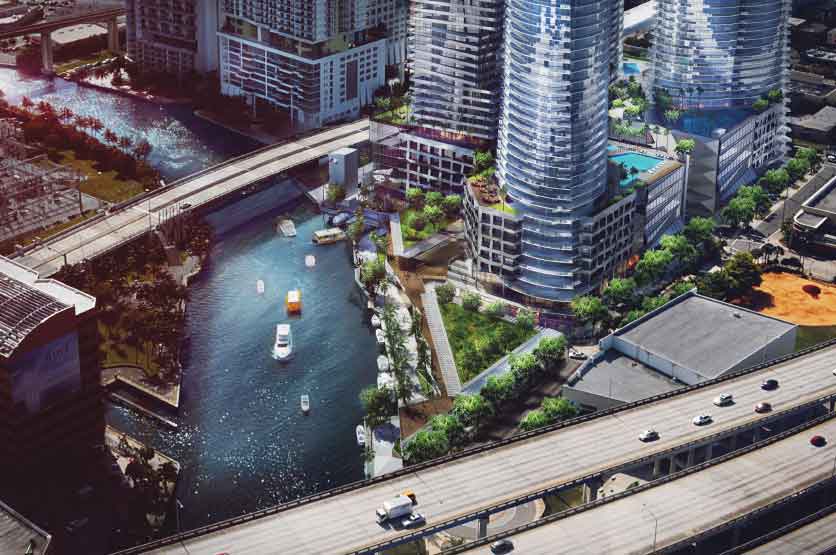 Miami commissioners have approved a large mixed-use development on the Miami River that is expected to revive a city park, extend the public riverwalk, connect Brickell and Little Havana and bring jobs and tax revenue to the city.

Between the first and the final votes, Commissioner Frank Carollo negotiated with the developer and secured promises that will provide money for affordable housing and space for a paramedic station within the development.

In the end the developer agreed to pay $14 million into an affordable housing trust, in staggered payments, with the first $1 million to be paid by Feb. 1, according to Mr. Carollo.

“We will see this immediately,” he told fellow commissioners.

The second $1 million will be paid within three to six months of the developer getting a building permit for the first tower, he said.

“I appreciate the developer’s openness to address this,” said Mr. Carollo.

With the added density and population this project will bring, issues of public safety are even more of a priority, he said, mentioning the impact on response times for fire-rescue calls.

To address this, the developer agreed to provide 8,500 square feet for the city’s fire department to establish a paramedic station inside the development, said Mr. Carollo.

“These are important issues to all residents,” he said.

Mr. Carollo said it is a beautiful project. “I commend the architect and design team,” he said.

The project promises to bring new life to the mostly vacant land just east of I-95. It’s planned for an area bordered on the north by the river, on the south by Southwest Seventh Street, on the west by Southwest Third Avenue, and on the east by Southwest Second Avenue.

Along with its size – four towers, 58 to 60 stories tall on 6.2 acres – this project stands out because the city is a partner.

As part of the Special Area Plan under the Miami 21 zoning code, a portion of Jose Marti Park will become a part of Miami River.

That would result in an extension of the riverwalk west and under I-95, and improvements to the park. A deal struck with CG Miami River LLC also ensures the riverwalk will be extended east under the Second Avenue Bridge and past neighboring condo tower Latitude on the River.

The overall project will see creation of a new street accented by public art, and more than $21 million in public benefit improvements from the developer, including upgrades to the park and the riverwalk.

Mr. Carollo also said he got the developer to agree to increase public benefit payments over time if portions of the project remain unbuilt, with rates tied to hikes in the Consumer Price Index.

•Amended policies to allow up to 400 dwelling units per acre.

•Authorized the area to be master planned to allow a greater integration of public improvements and infrastructure and greater flexibility.

“This is not gentrification – not one resident will be displaced,” she told the commission.

Ms. Tapanes Llahues said it is a billion-dollar investment that will have a $24 million impact on the city, of which $10 million will go to road improvements and $6 million to parks.

Currently the vacant site generates about $520,000 a year in taxes, she said. Once built to its full potential, Miami River is expected to bring $41 million in taxes each year, she said.

Horacio Stuart Aguirre, chairman of the Miami River Commission, spoke favorably of the project, saying the river commission is very enthusiastic about the development coming to a blighted area.

Calling design of the project “fresh, light, airy,” Mr. Aguirre said it will be a neighborhood improvement.

Several residents of Little Havana spoke in support, saying they look forward to the new jobs and the improvements to the park.

Area developer Avra Jain commended the developer and architects on a “beautiful project,” and for outreach to keep residents and officials informed of details as the project progressed.

“They were listening,” she said of the developer’s team, while seeking community input.

Ms. Jain said she bought property in the neighbor in the hope that this project would go forward. She is the new owner of the historic Miami River Inn, just up the river from Jose Marti Park.

Max Vlessing, one of the founders of Water Taxi Miami, said he is 100% in favor of the project, particularly its plan for dedicated dockage for water taxi service to Miami Beach, Virginia Key and other areas. “I’d like to see more like it,” he said.

One major goal of the project is to create a sustainable neighborhood that offers a transition from the lower density of East Little Havana to the higher density of downtown.