Advertisement
The Newspaper for the Future of Miami
Connect with us:
Front Page » Business & Finance » All Aboard Florida ticketing 15 months off

All Aboard Florida ticketing 15 months off 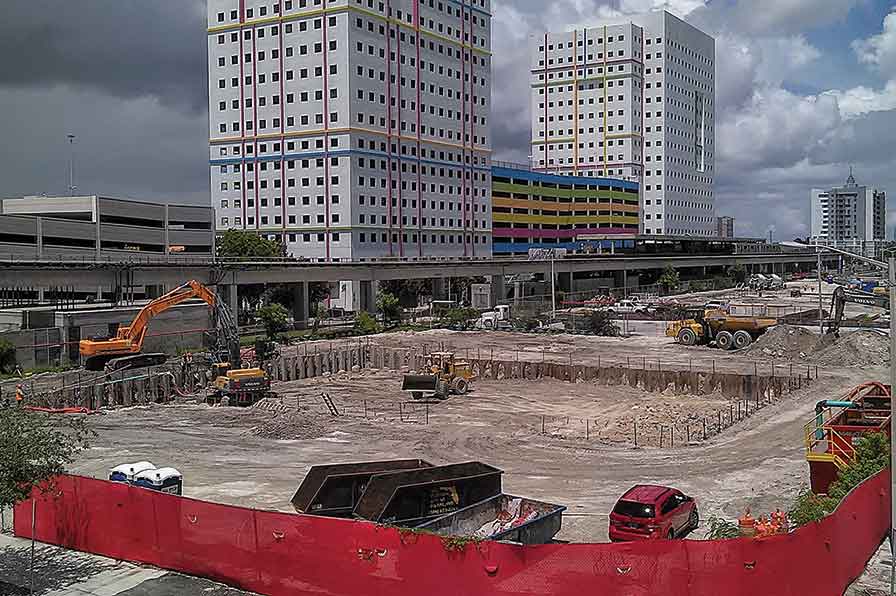 All Aboard Florida trains with all-reserved seats in various sitting arrangements and sizes are to be delivered here in the third quarter of next year and be ready to start carrying passengers at the outset of 2017, President and Chief Development Officer Michael Reininger says.

“The minute we’re in service” the new railroad line will be looking for ways to expand and enlarge its services, Mr. Reininger told a Greater Miami Chamber of Commerce lunch last week in answer to questions about serving more points in Florida than are now planned.

The new rail line is to run from the downtown Miami point where Henry Flagler planted the city’s main station on his Florida East Coast Railway more than a century ago through new All Aboard Florida station developments in Fort Lauderdale and West Palm Beach to the northern terminus at Orlando International Airport, Mr. Reininger said.

Asked by chamber members whether the railroad would go to other Florida cities some day, he said some are more likely than others. Jacksonville, he explained, was on the Flagler railway’s route that All Aboard Florida controls so it’s easier. Tampa is “important and desirable” but it’s harder to reach because the infrastructure base does not exist, though it’s among “important expansion opportunities.”

Asked by a frequent traveler to the state capital about trains to Tallahassee, Mr. Reininger said quickly “that’s very challenging” and after a pause added to applause “I wonder if we can move the state capital to Miami?”

The initial runs from Miami will be to Fort Lauderdale in 26 minutes and to West Palm Beach in less than an hour, Mr. Reininger said. The Miami-Orlando run is planned at about three hours, he said.

That run to and from Walt Disney World’s home fits into the All Aboard Florida plan to serve about 100 million annual visitors to Florida who he said congregate along the East Coast of the state. The other groups of passengers he said the service targets are business travelers and Florida residents – though clearly visitors come first on the list.

“We are treating this as a hospitality service, not a transportation service,” he explained.

The new Siemens trains on order have “a high degree of focus on passenger comfort,” he said.

They are to be Americans with Disabilities Act compliant, with a person in a wheelchair able to traverse their full length conveniently. The train doors will open at platform level for boarding.

The trains, he said, are to have “robust” WiFi, ample power for personal devices, clean and convenient bathrooms, customer convenience and hospitality, and food and beverage services.

The trains are being built in Sacramento, CA, totally manufactured in the US.

All four of All Aboard Florida’s stations are under construction, he said, and all four are multi-use real estate developments. Each piece of each depot, he said, is to have multiple uses.

Miami Central, the station here, is to have the train platform elevated 55 feet above street level. The depot is to link with Metrorail, Metromover and Tri-Rail on its concourse level one story above street level. That level, he said, will have 200,000 square feet of retail and services. Then above the train platform level are to be 800 affordable residential units that he said are targeted to young users oriented to an urban environment.

Other buildings to be part of the massive depot project will include office space.

The company, he said, plans $3 billion in private investment and will generate $6 billion in new economic impact in its first eight years alone, with 2,000-plus permanent jobs.

Within a month, he told the chamber, All Aboard Florida will be rolling out at a Miami event a new brand based on the key attributes of railroad travel, which he identified as price competitive to the cost of driving to Orlando, traveler comfort, time saving in speed of service and convenience with 16 daily roundtrips.

Now, he said of the first new railroad line in this nation in years, “we are on the goal line.”

3 Responses to All Aboard Florida ticketing 15 months off